Hubby and I went for a date night last Monday. Ok, not really a real date night. We’d thought it was going to be but we ended up having dinner with three others who proved to be good company for the night.

After dropping the kids off at my mum’s for the evening, we headed to Arossa Grill & Wine Bar – the new hotspot in the latest culinary experience in the heart of Orchard Road at Scotts Square. 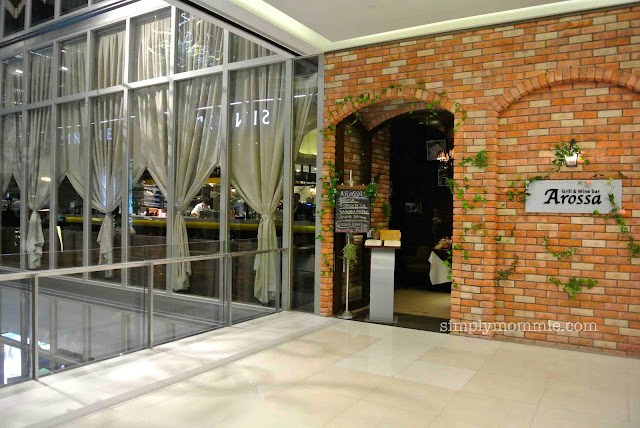 I’d say although Arossa Grill & Wine Bar is tucked at a corner of Scotts Square, it stands out among the shiny floors and gleaming displays with its brick walls and wooden floors. You see, it was our first time at Scotts Square. I know, we’re very suaku. 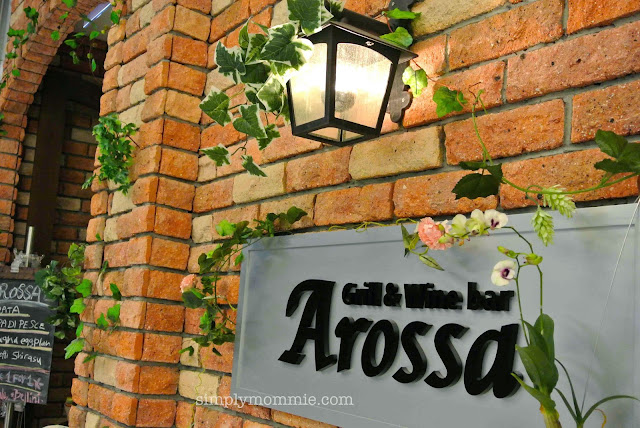 Its warm and rustic charm is hardly something you can miss when you step in. 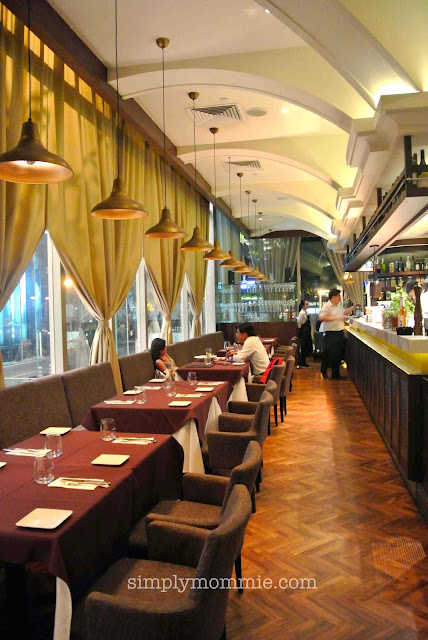 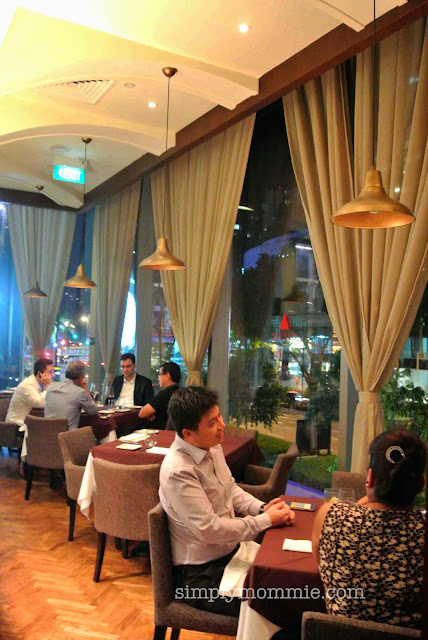 The restaurant impresses with exciting creations from the celebrated Chef Chiaki Watanabe. Though simplicity is key in her food, she doesn’t compromise on delighting guests with delectable tastes. The restaurant is known for its grill sourced from Australia and New Zealand, the pairing of a wide range of wines to complement each dish and of course for using the freshest ingredients to please the palates of those who love grilled food.

We started with freshly made Focaccia and Walnut bread served with olive oil, garlic and anchovy dip: 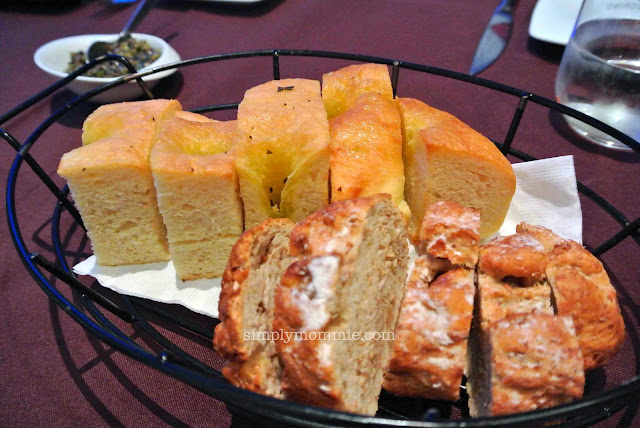 Since I’m allergic to tree nuts, I couldn’t taste the walnut bread. But according to my hubby, it was good too. But what I really liked was the dip. 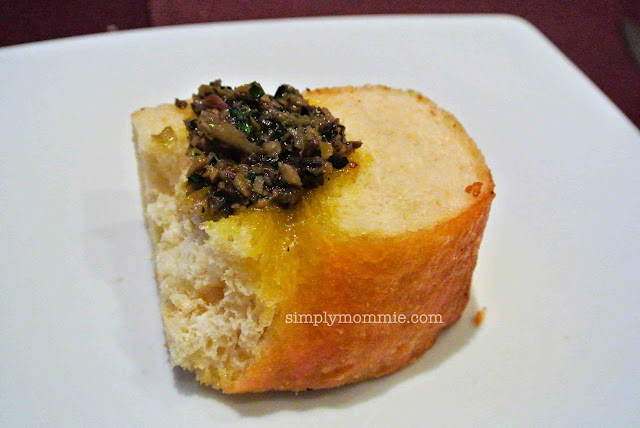 Simple, yet tasty because of the anchovy and fragrant garlic. Great pairing here, I’d say.

Next up, we had Calamari: 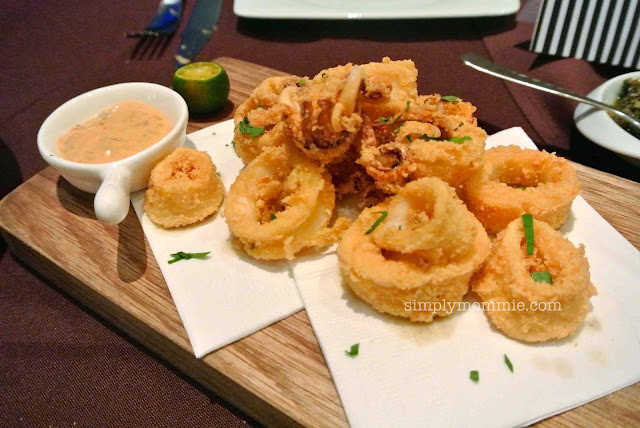 The sauce was the icing on the cake honestly. The calamari on its own was delicious and crunchy without leaving an oily aftertaste. The sauce however wasn’t really spicy. Or maybe I couldn’t detect it because it was too mild.

The next dish we had Burrata: 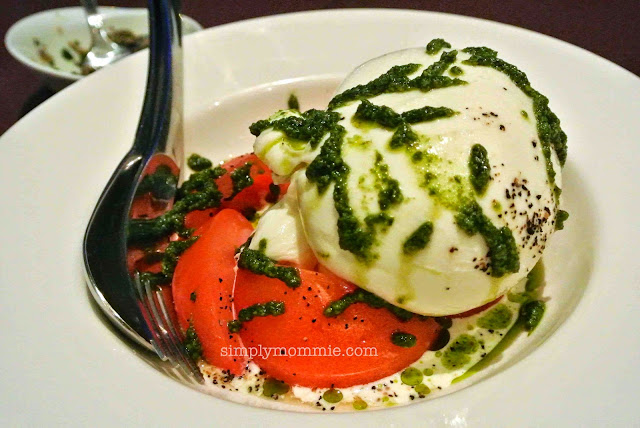 Again, because of the pesto, I had to refrain from tasting the dish in its entirety. I had some of the burrata cheese. I’d have to admit this was probably the dish I liked least during the food tasting session. I guess it’s an acquired taste or for people who really love their cheeses. Or maybe I need to have a taste of everything together or I can’t appreciate its essence. Tomato also ranks low on my list of favourite foods.

Anyway, because Chef Chiaki is such a sweet chef, she immediately got a bowl of soup served, especially for me, because she heard about my nut allergy and decided that I should have a taste of something else since I was missing out on the burrata. 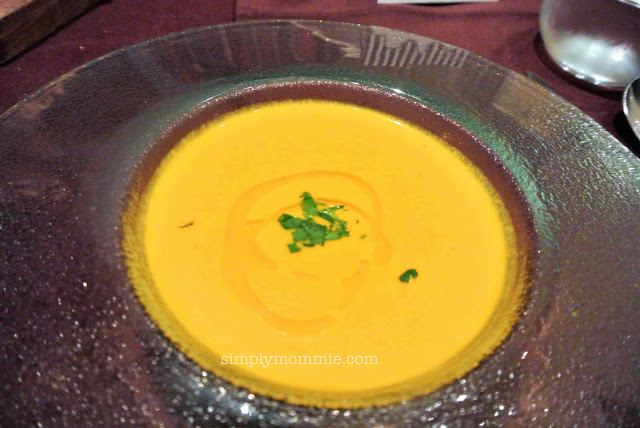 The soup of the day was cream of carrot. The carrot taste was mild and definitely would sit well with people who aren’t particularly fond of carrot. I found it creamy and being a soup person, this was a soup that went down well with me. But I was really very touched by the attentiveness of the chef!

Next, we were served Gnocchi and Ravioli: 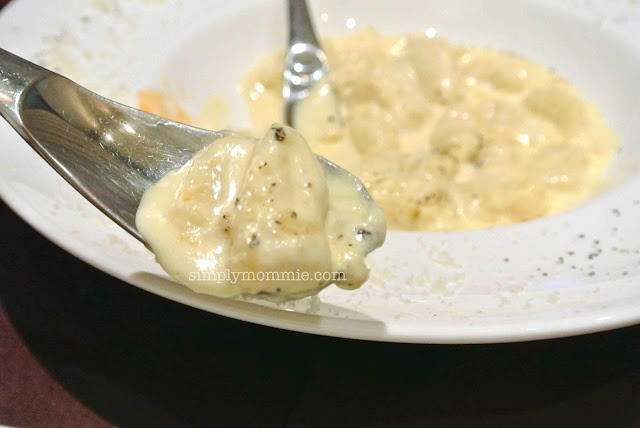 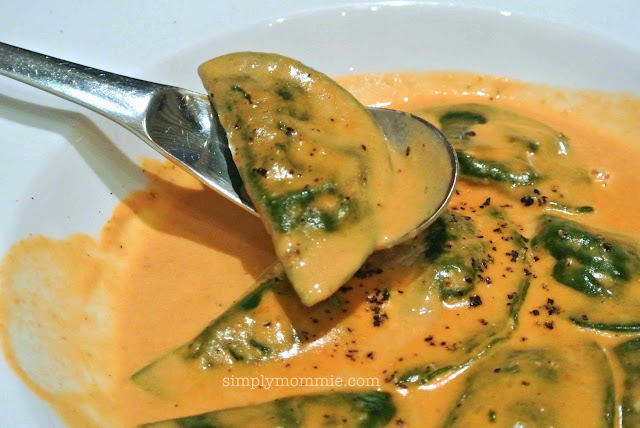 The Gnocchi was very rich and creamy and it was also very fragrant because of the four cheese sauce. It was smooth and delectable, and I would imagine this to be perfect comfort food on a rainy day.

But I preferred the Ravioli with the Lobster & Bisque sauce! The sauce was sooo good, so savoury sweet, I was quite tempted to finish this all by myself and lick the plate clean. But I had an image to maintain, so I had to exercise a lot of self-control that day. This, my friend, is comfort food on any day.

Then the meats appeared on the table. We had Ribeye and Tonno: 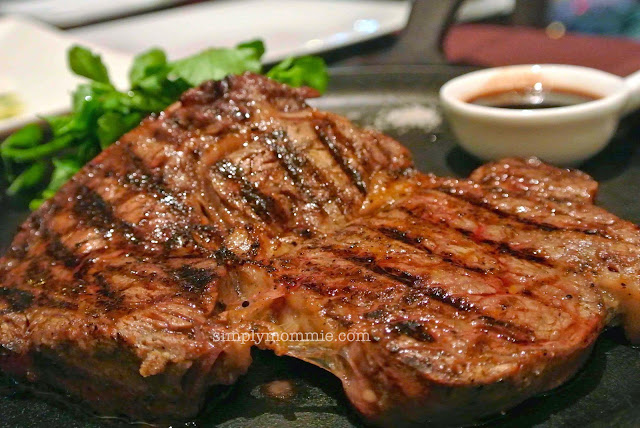 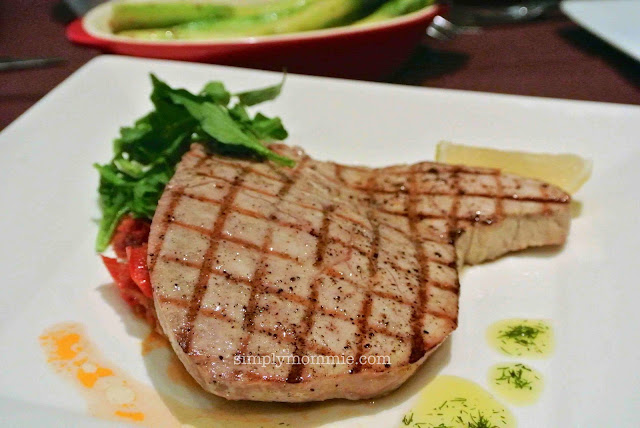 It was the first time I had tuna prepared and cooked this way. It was absolutely intriguing and although I love beef, I’d have to say that Chef Chiaki’s grilled blue fin tuna was fabulous. The texture was good with all the juices sealed in, and coupled with the faint lingering taste of the grill, I was totally in love with this.

The ribeye was delicious as well and the red wine sauce was splendid. I enjoyed both the meats – they were just bursting with flavour and juices!

The sauteed asparagus paled in comparison next to the flavourful meats and sauces we’d had. It was crunchy and naturally sweet though. Nothing fancy, but it was refreshing. 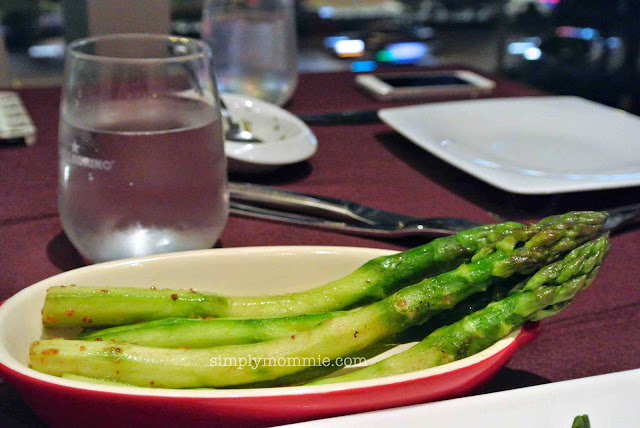 As I previously mentioned, Arossa Grill & Wine Bar is famous for its pairing of meats and wines. In fact, if you aren’t sure which wine to have with your main dish, you can always ask for recommendations! 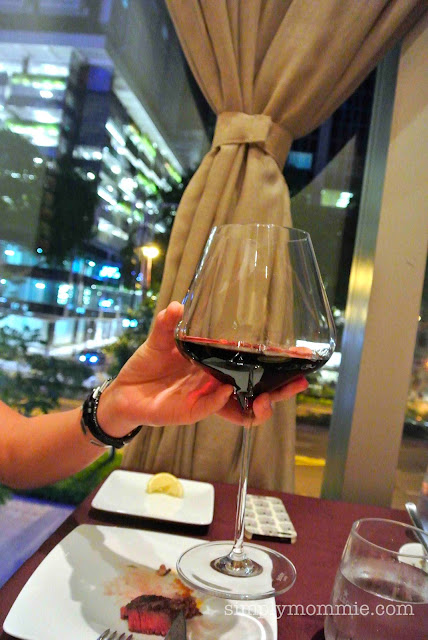 I haven’t had wine for y’know, centuries. Ok, maybe not centuries but I’ve been Mother Cow for a long, long time, never ever stopped for a single day since my daughter was born. She’s going to be 6 in July. And no, in case you’re about to scream or drop your jaw, she’s not the one who’s still nursing, though I did breastfeed her till she was 4, in between tandem nursing both her and my baby boy (you can read more about my extended breastfeeding journey). So yup, I haven’t had my wine for quite awhile. I figured that I probably had enough wine in the past to make up for all that I’ve missed out on since the children came along. But the wine here was too difficult to resist so I asked for a glass.

It’s a literally huge glass, though not that much wine in it. I took two sips and started to feel a little warm and fuzzy and I stopped at the third sip because I was sure the floor under me would start to move. The wine was very good though, very smooth and supple with a lingering fruity sweetness. Went very well with the grilled food so remember to ask for recommendations when you order your wine there. There are over 120 label of wines available in store to complement whatever mains you order.

We had Tiramisu and Creme Brulee with Chocolate Ice-cream for dessert. 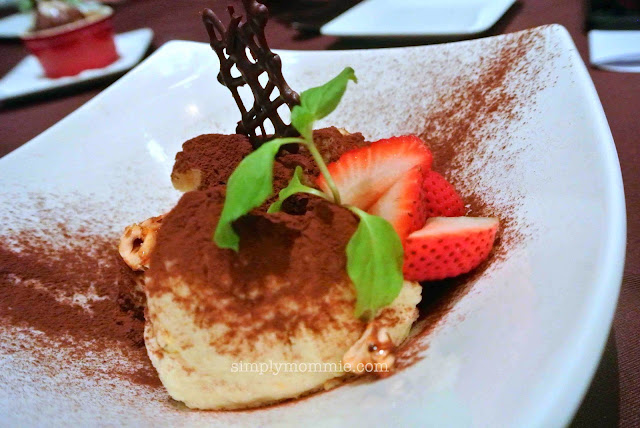 The tiramisu comes in this deconstructed form, quite unlike the conventional way tiramisu is served. But really, I don’t think the look of it matters because it was silky and delicate and satisfying. It is, after all, one of the signature desserts of Arossa.

The creme brulee stole the show though because it’s possibly the best one I’ve had so far! You need to try this, that’s all I’ll tell you. 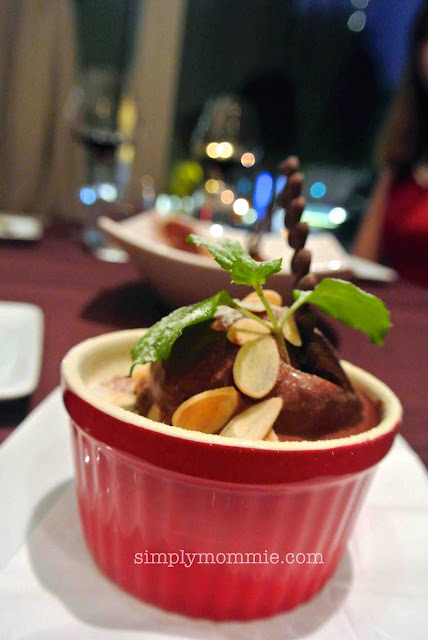 Arossa Grill & Wine Bar has three private rooms which can be adjoined to fit 22 people and this is one of them: 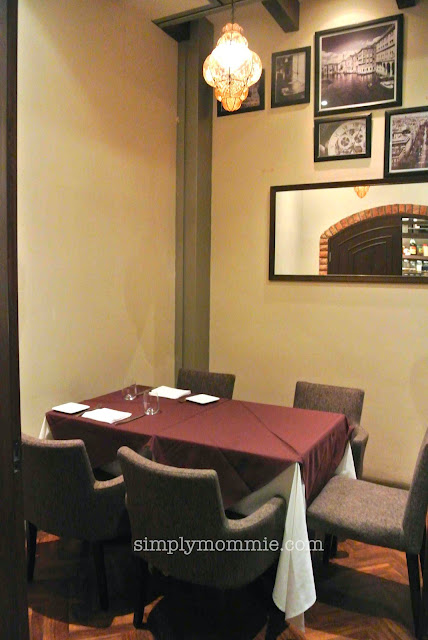 These three rooms however do not have a marvelous view like the private room we were dining at: 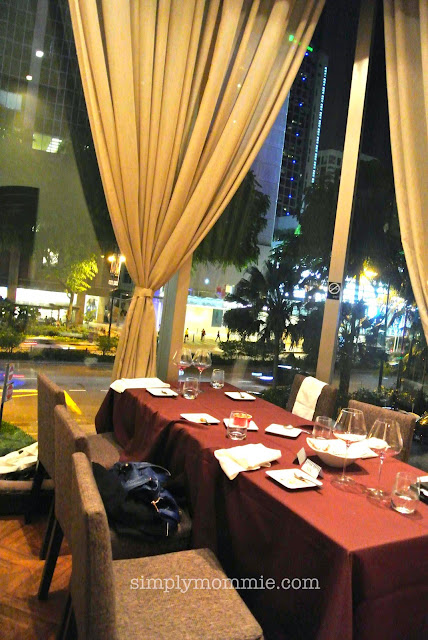 And of course this post won’t be complete without introducing you to the thoughtful and passionate Chef Chiaki: 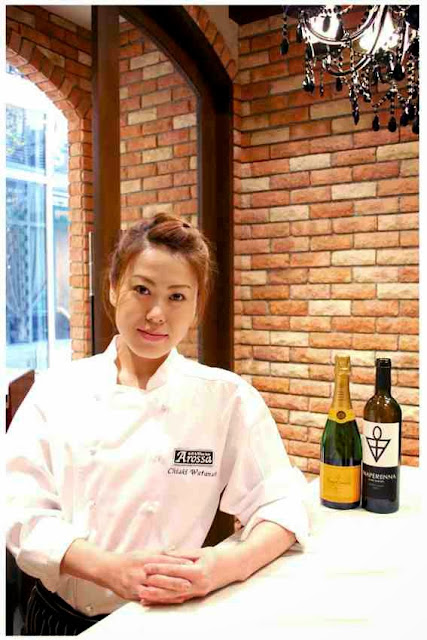 Currently there’s a LUNCH promo and here’s the menu! (I’m not sure when the promo will end though! Remember to enquire when you call for reservations!) 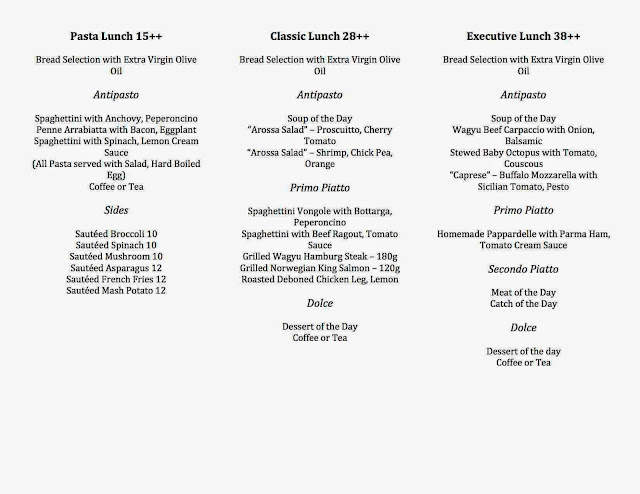 Disclosure: We were invited to have dinner for purposes of writing this Arossa Grill & Wine Bar review, but no monetary compensation was received. All opinions are mine. Promotion prices are correct at the point of publishing.