We were at Changi Airport last Saturday to check out the SpongeBob SquarePants-themed Christmas as well as the awesome topiaries within the restricted areas of the airport and before heading to the largest SpongeBob bouncy playground, we went to fill our tummies first. While we were still deciding what to eat, we were led to Dian Xiao Er purely by the tantalizing smell that was coming from the restaurant as we were walking near it.

We were a tad ravenous by the time we sat down to order so I must say that we kinda over-ordered when we chose the Family Set B for 3 pax. It would have been probably sufficient to have ordered for 2 pax. 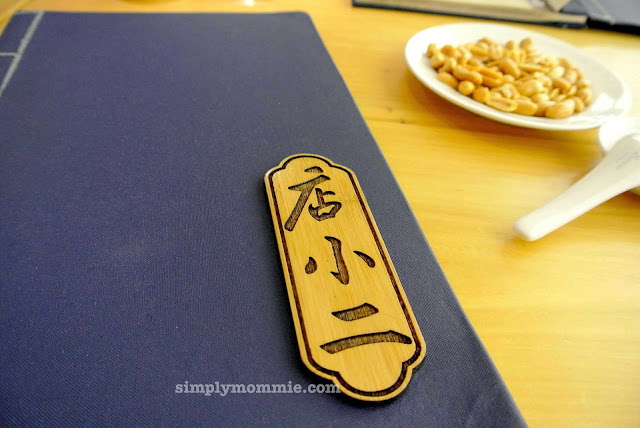 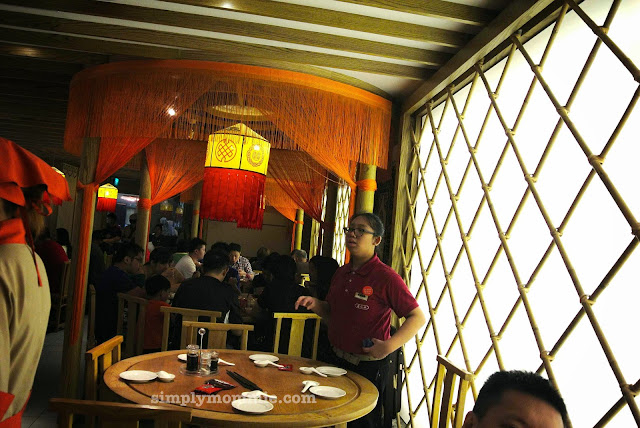 If we had ordered for 2 pax, there would have been a bowl less of rice and soup and there wouldn’t be a tofu dish.

Ok, now the superior steamed rice was just plain white rice, so I don’t really think it should count as an item in the set. Anyway, the duck was really really good and among their duck dishes on their menu, this Duck roasted with ten wonder herbs is one of their signature dishes, and it does live up to its reputation. The herbal taste was wonderful and the meat was so tender. The kids lurved it, especially my little girl who is normally hardly fond of duck meat. She kept asking for more – and that says a lot about the duck. The sauce goes very well with rice and I could have eaten this dish alone with just a bowl of rice. 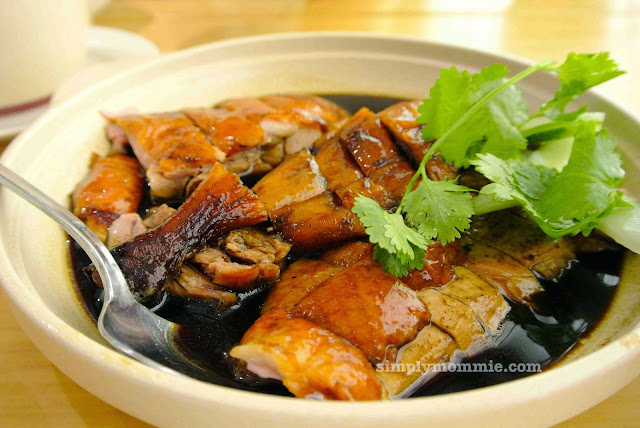 The soup of the day was lotus root and pork rib soup. Must be our lucky day since it’s one of our kids’ favourite soups! I felt that the soup tasted alright, not particularly nice but still ok… but my hubby felt that it was a little unnaturally tasty. 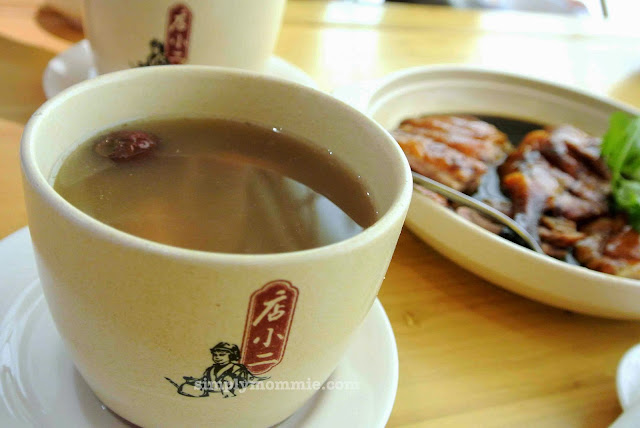 Soup of the day （每日老火例汤）

My hubby loved the Mongolian spare ribs. This is mildly spicy as it is coated with black pepper and plum sauce so the kids didn’t eat this dish. I felt that the taste was a little too strong and a little too salty for me but it was a hit for my hubby who’s fond of food with stronger flavours. Texture-wise, it was tender and succulent. 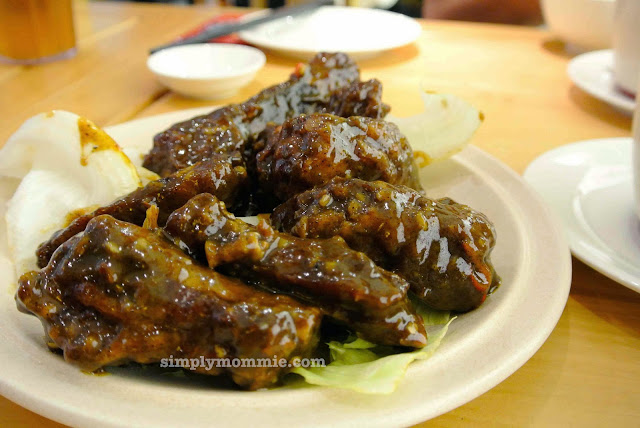 This tofu dish is the only dish which I felt that they bothered to plate nicely. 😀 Unfortunately, the taste of the tofu wasn’t as good as it looked. I’ve definitely had better tasting tofu elsewhere. The saving grace was actually the broccoli, which though was probably intended to used as a garnish, was happily devoured by my broccoli fans. 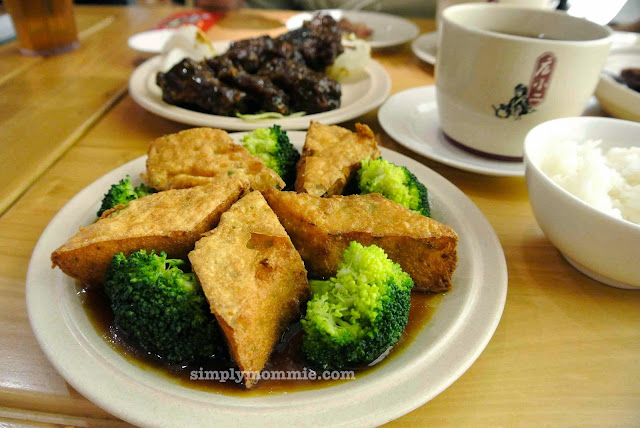 I had actually swapped out the bittergourd dish thinking that the kailan dish might be more palatable for kids but I truly regret my decision because it wasn’t and tasted too strange. It’s my first time eating kailan cooked this way and I think it’s probably an acquired taste. The staff had initially served up a plate of the bittergourd dish and almost insisted that I accept the dish even though I had already stated clearly while ordering that I wanted the vegetables swapped. After I tasted the kailan, I totally regretted not taking the bittergourd because the bittergourd dish looked so much more appealing. Sigh. Oh, erm, this kailan dish is a signature dish! I must say it’s special though and it did kinda taste a little better with each mouth I ate. It was mainly sour and there wasn’t much salted fish. 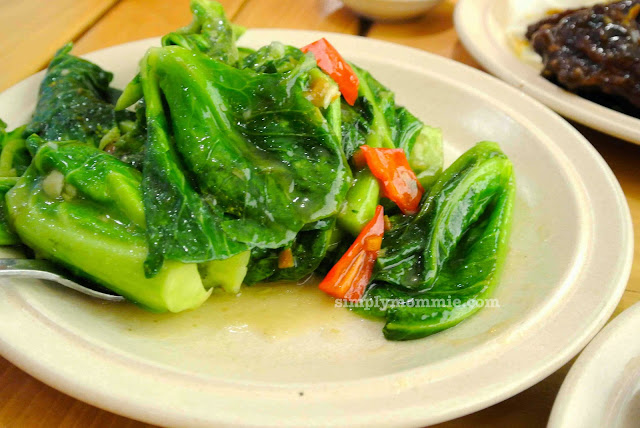 By the time I had dessert, I was bursting at the seams but I nevertheless looked forward to eating the D-boiled Hashima because I’ve not eaten hashima for a long long time! Although I was already so stuffed, I was still hoping that the bowl of dessert would be bigger than when they served it to me. Unfortunately, it was a very, very small bowl 🙁 but oh well, I guess the bowl couldn’t have been very big since it cost $5.60. 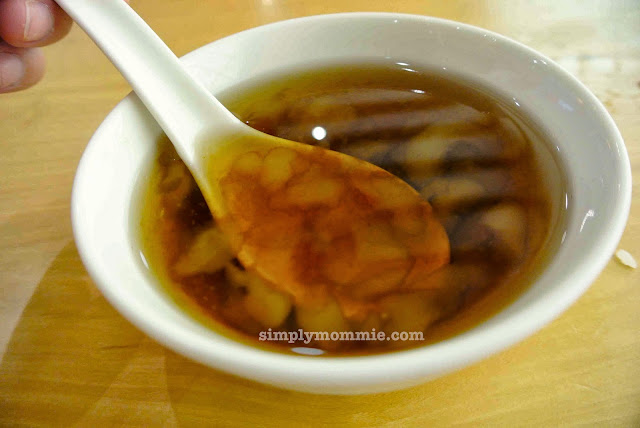 And that concludes our meal at Dian Xiao Er. Some hits and misses – I’m still thinking of the delicious duck – and we paid $80+ for the meal. Would probably visit again but would definitely order less next time!