I haven’t written a staycation review in awhile because we kinda are creatures of habit and keep going back to places we like, for example Oasia Hotel’s Club Room, Equarius Hotel and Crowne Plaza Changi Airport (but we’ve stopped going since Changi Airport has removed the cap on parking for the entire day – we had to pay for our car’s staycation at the carpark too). And yes, I remember I said I’ll write about my Shangri-la staycation last year and I hope to get that together after I go refresh my memory of the place this August during the National Day break. 😀

Anyway, I finally stayed at Movenpick Heritage Hotel at Sentosa – I don’t know why I’ve always been drawn to the hotel – but by the time we did, the name had just been changed to Le Meridien Hotel. Thankfully it was not the name that I fancied, but the look and the feel of the hotel! 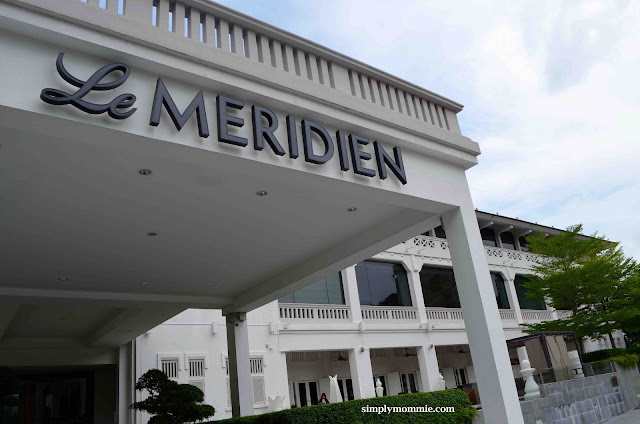 We stayed at Le Meridien during the recent June holidays for 3D2N. When we arrived, my hubby parked at the hotel carpark and we basically left our car there for the entire duration of our stay (parking is complimentary – phew! You would think this is a given, but well from our experience, it isn’t always the case). 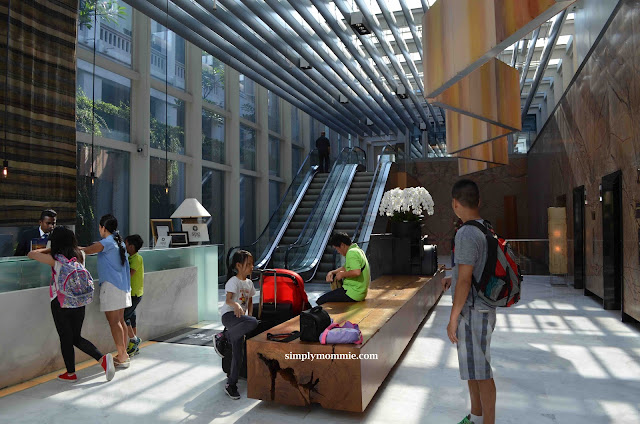 The lobby of the hotel

We were also provided with complimentary monorail passes should we choose to exit Sentosa to go to VivoCity. We never got to use those since we didn’t see a need to leave Sentosa.

We booked the Classic room (30sqm) using the current discount for MOE staff. 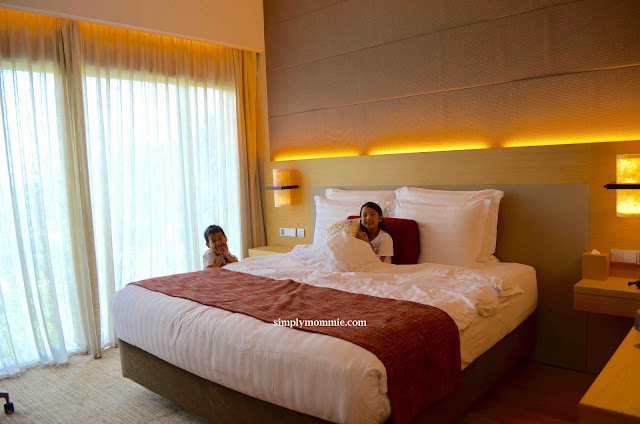 The room – there’s a choice of king or twin beds.

The bathroom has a freestanding bathtub and a separate shower room. The little items like cotton buds and shower cap are found in the bamboo baskets (think dim sum) at the sink countertop. 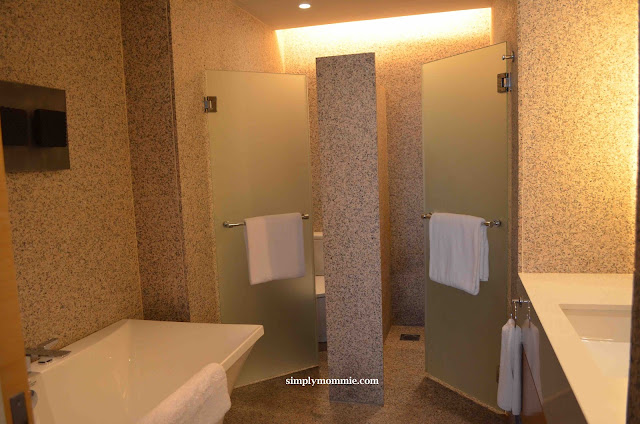 We quickly settled in with the free wifi and we went for a swim that evening before we headed out for dinner at Resorts World Sentosa. We could walk there but we chose to take the monorail since the station  (Imbiah) was just across the road. 😀 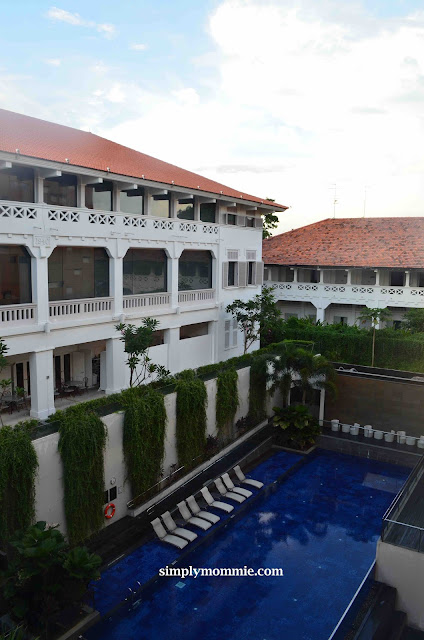 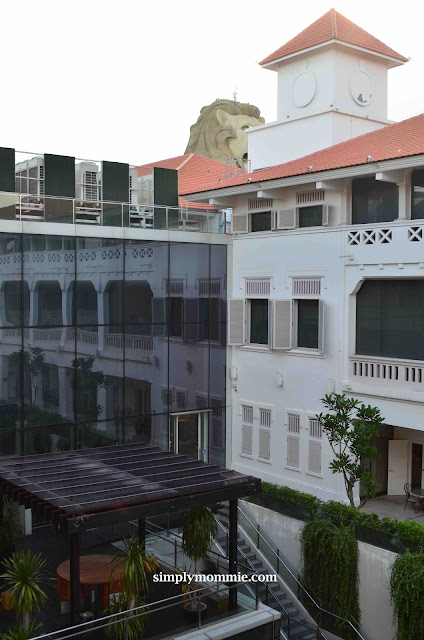 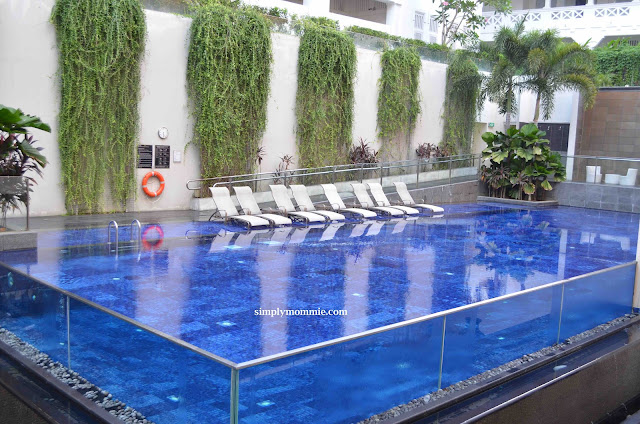 The pool water was surprisingly warm!

We were mighty pleased with the room till about 1030pm that night. You see, we were given a room which had an adjoining unit. I’m not sure if that was the reason for the poor soundproofing, but we could hear the conversation in the next room. Like every word. Oh, and the silly loud kiddy toy they had apparently just returned with. It was turning into a nightmarish staycation, one that we had encountered at Siloso Hotel and D’Resort. I called the concierge to inform them of the noise twice but apparently there wasn’t very much they could do about the noise since the din wasn’t along the corridor. So, we put up with the noise till our very boisterous neighbours decided to call it a night. I think I fell asleep at 1am.

We woke the next morning like zombies, but we were excited about our first visit to Kidzania so that kinda got us going. Before we left the hotel after breakfast, I went to enquire at the front desk if there was any chance that they could change our room to a non-adjoining one, explaining what happened the night before.

The manager was very nice about it, apologised for the noise and promised to give us another room, and hopefully we’d have a better experience. We packed our stuff up in the room (the staff would shift the luggage to the new room) and left for Kidzania after that. We didn’t see our room till it was 8.30pm that night.

Boy were we over the moon when we saw our room after our exhausting day out at Kidzania. Apparently the manager upgraded our room to the Heritage Suite which is located at the Heritage Wing. And I swear I didn’t pin him to the wall or hurl any vulgarities at him, so it was really generous of the hotel! 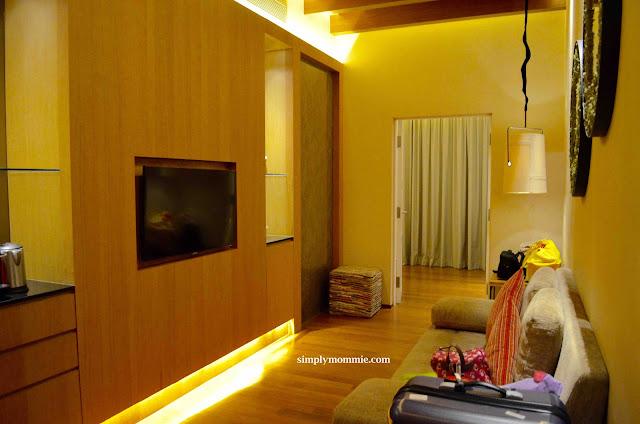 Heritage rooms are 40-48 sqm with a separate living area 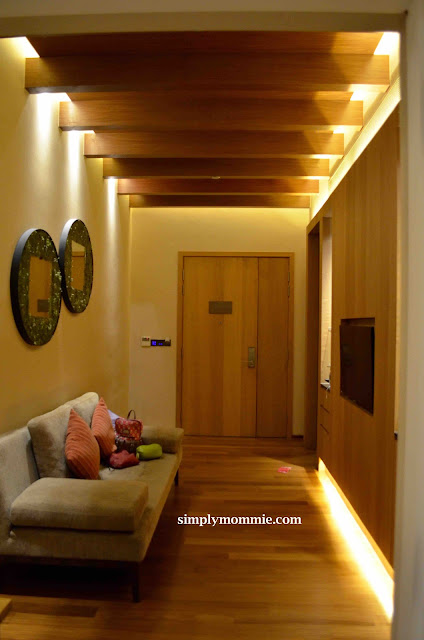 The separate living area is equipped with a sofa bed, large LCD TV and DVD player and a Nespresso machine. 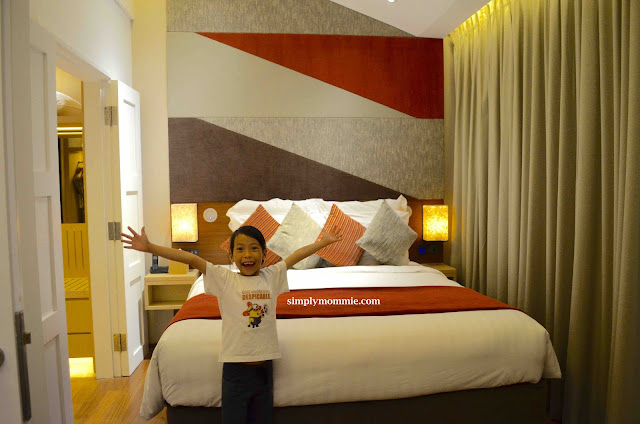 The bathroom has two entrances/exits – one to the bedroom and one to the living area. There’s also a walk-in wardrobe as you can see: 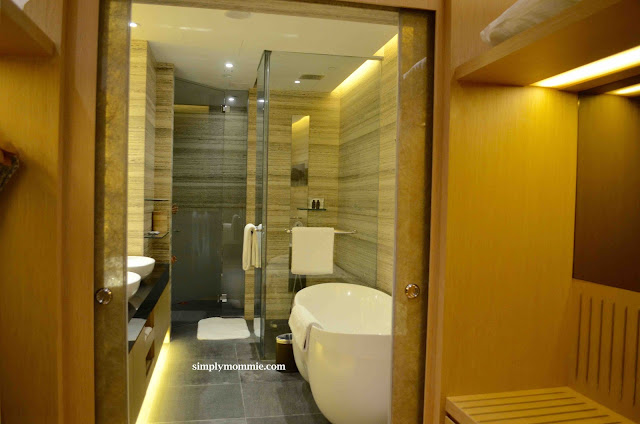 This was definitely a super upgrade, one that was totally unexpected, and we are really thankful for it. And we had a wonderful rest for sure!

Since we weren’t rushing through our second breakfast at the hotel, I finally had the time to take some photos. 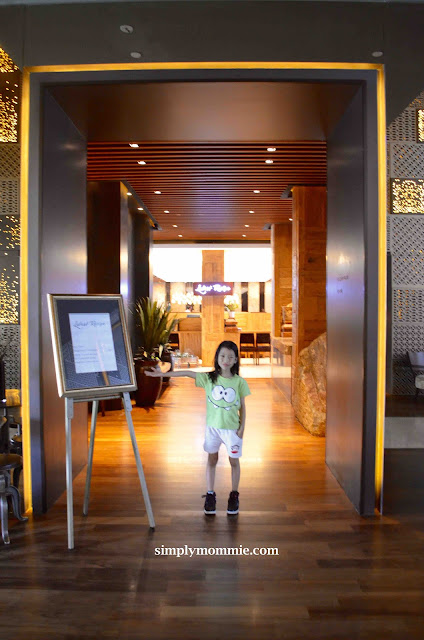 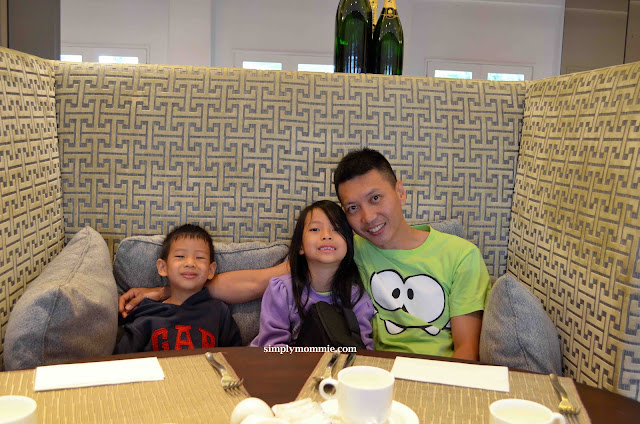 The guests I think are seated according to which Wing of the hotel they stay in. I say this because on the second morning we were seated at the super comfy side. Not to say that the other side wasn’t good. It just didn’t feel as luxurious. We got the same spread of the buffet anyway, so actually that wasn’t a big deal. 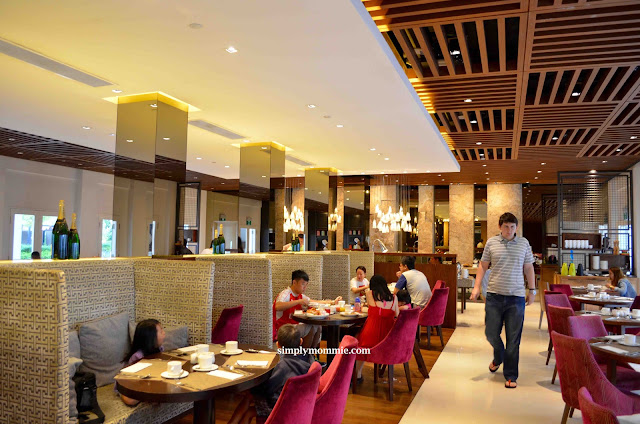 The international buffet was normal 5-star hotel standard, not particularly outstanding nor did it disappoint. I don’t recall anything very specific that I liked, but I’m looking forward to eating corned beef hash during breakfast at The Line next week (related: The Line buffet review (dinner)). 😀 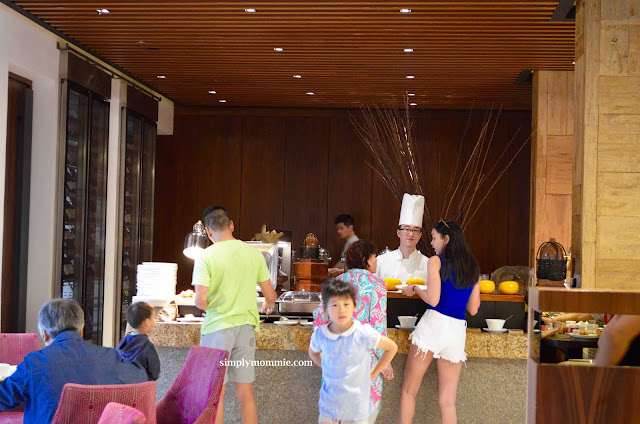 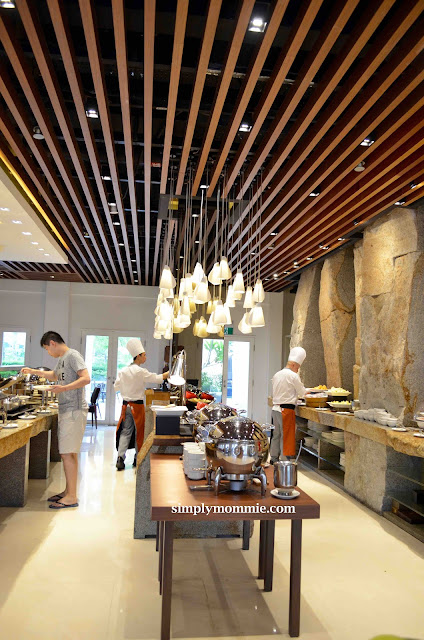 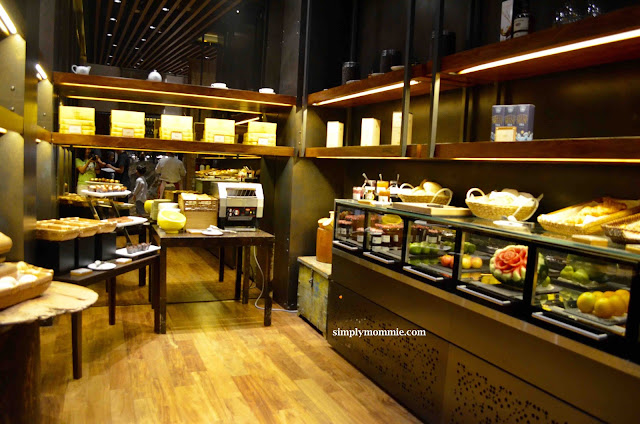 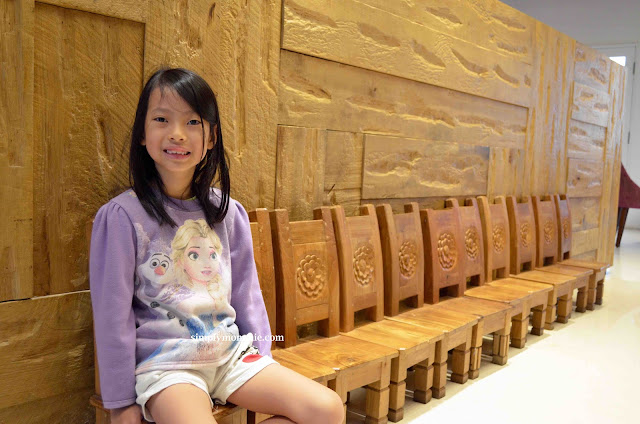 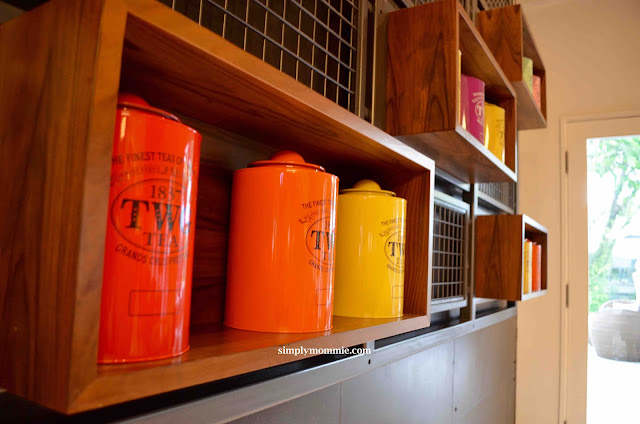 There’s a selection of TWG tea at the buffet as well as in the hotel rooms. (Photo taken by my girl)

This antique phone was located near the lift lobby of the Heritage Wing on our floor. I can’t remember if it actually works but I think it does! 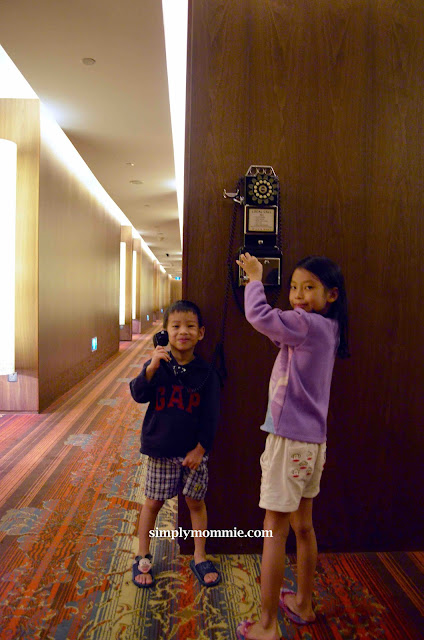 Before we reach the rooms, there’s this decorative segment, which is just so difficult to take a shot of. 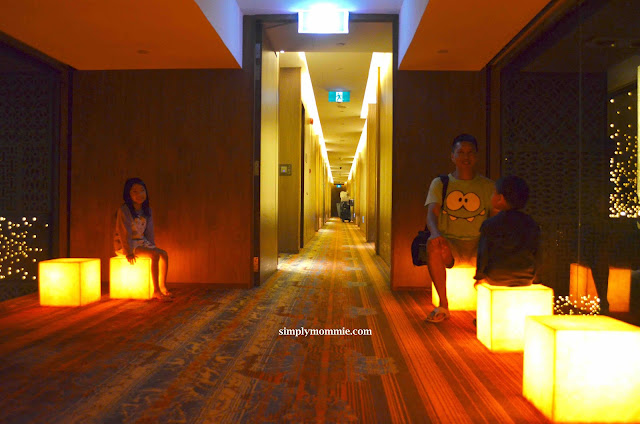 And after breakfast, we returned to our room and I realised that hey, Mr Merlion is just outside! 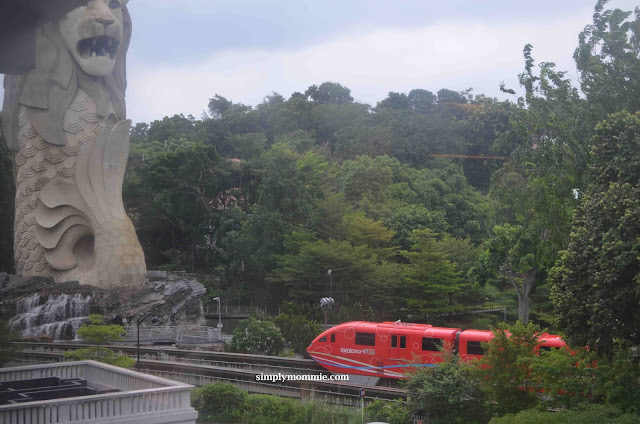 The whole hotel is just really beautiful, and I am absolutely delighted that I finally stayed there for one super awesome night, (and one not so awesome one). 😛 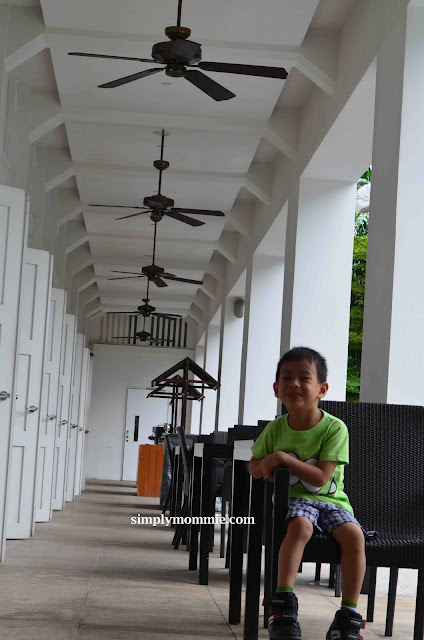 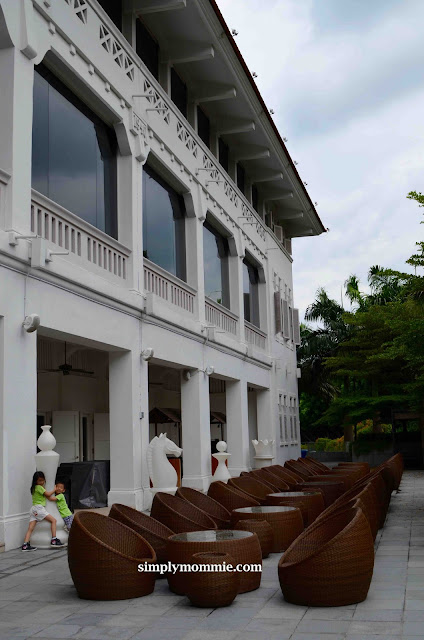 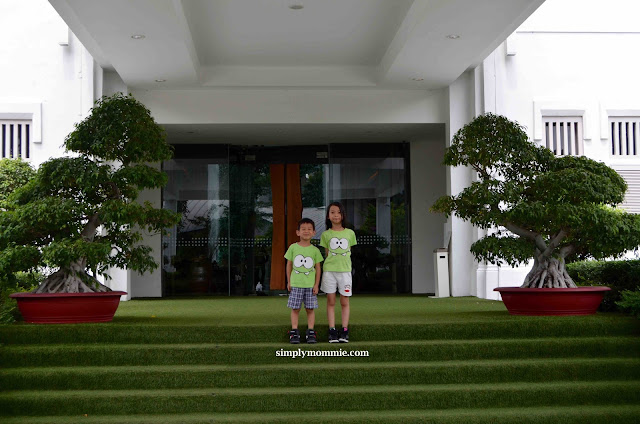 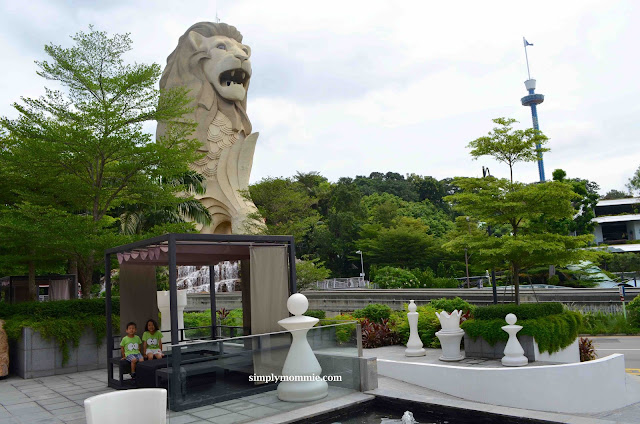 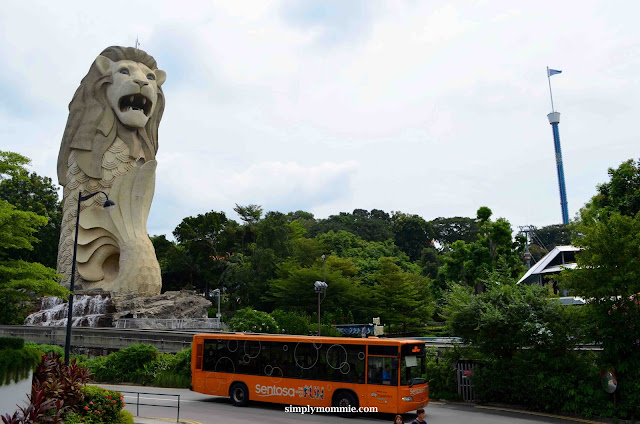 After we checked out, we hung around to take photos and let my girl practise taking photos since her interest in photography was sparked at Kidzania’s Canon booth. 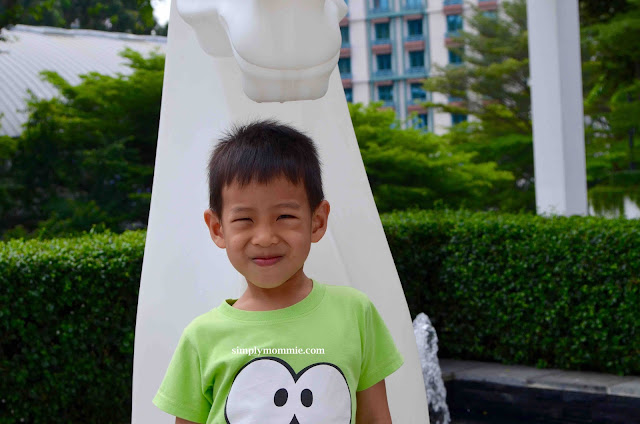 Photo taken by my girl 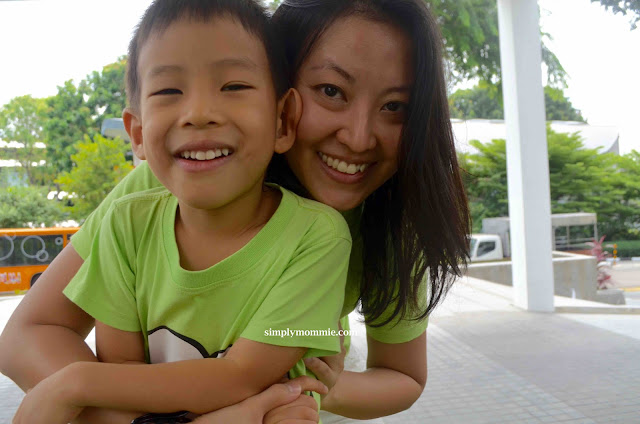 Photo taken by my girl – my favourite shot!

Le Meridien is located opposite Imbiah station, really near to the Merlion as you have already noticed. This is the first time I’ve taken so many shots of the Merlion in my life! 😀 It is walking distance to Kidzania (about 5 minutes walk) so it was really convenient for us during this staycation! The staff are friendly too, and the manager of the restaurant even remembered to ask about how our trip to Kidzania went the next morning!

This entry was posted in Reviews, Staycations, Vacations. Bookmark the permalink.