I had actually planned on reviewing my resolutions from last year in February this year but somehow it never materialised. The draft is still in the draft folder! 🙂 I wanted to get it out in June, but school holidays always means less time to write. Nevertheless I thought I should at least get it done sometime eventually. And instead of haphazardly trying to tell you everything at a time, I’ve decided that I’ll just focus on the biggest goal which I’ve set for the year 2016 (but have yet made known on my blog).

GOAL for 2016: Exercise and slim down

One of the biggest things for me this year has been focusing on exercising and slimming down. Make no mistake, this weight and flabbiness isn’t exactly postpartum. I actually did lose the weight I gained in both my pregnancies and even blogged about it four years ago. Unfortunately, with age catching up, a slower metabolism rate, and the unchanging sweet tooth, I gained back almost 10kg (cue: scream) over these few years – this time with no baby inside.

So, last year I made my first step to making exercise a part of life by signing up for Zumba. I actually liked it so much I ended up signing up for it twice a week. But after the instructor went for knee surgery and a serious bout of stomach flu on my end, I dropped off both sessions eventually after half a year. This year with the extra hour or so per day to myself now that I’ve stopped homeschooling, I signed up for a gym membership with Contours Express, and Zumba at the Community Club once/week early this year.

After half a year of gym and Zumba, I’ve not lost weight significantly (only 1kg) due to building up muscle mass. I’ve never really been bothered by the scales though – it’s the lean, toned and sculpted look that I’m after. I’ve had questions about my apparent ‘weight loss’ since I am definitely looking slimmer (there’s still a long way to go, I know), so I know I’m making improvement, somewhat.

If you think I wasn’t fat to begin with, I thought you should know that my tummy was bulging badly even though I was trying my best to suck it in. I caught my friends checking out my tummy, and I could literally hear the little voices in their heads wondering if they should ask if I have a bun in the oven. I sported a distinctive double chin and my already thunder thighs were just unspeakable. Everyone in my family was telling me about the chin, tummy and thighs, with my mum and aunt’s weekly reminder resonating the loudest when I go over for dinner. 😀

So really, there was no question that I really needed to work on my appearance (and health). Yup, so that was some time last year – although I believe I was fattest in late 2014. Anyway, I was really tired of looking pregnant, so it sparked me on the quest to work on exercising and slimming down for the year.

After all that exercise (gym 3-4 times/week, and zumba once/week) – I don’t go for super high intensity kill-myself-type-of-training – I have managed to slim down visibly.  I’ve cut my fat percentage by 7% so far, lost 4kg of fat, and gained 3kg of muscle mass, even with a weekly or fortnightly ice-cream/ cake, and pretty minimal change in my diet. I have however switched to eating more for breakfast as I’ve realised that it does help me eat less during the rest of the day. And the best part – I am more energetic and happier (except during PMS! :D)

So how do I look now? I rarely appear in my photos because I have been shying away from the camera. But I thought for the record, I should have a couple of photos to document the progress. Btw, I totally suck at taking selfies, considering how rarely I attempt to do it, and how even more rarely it turns out fine. 😀 Let me know if you have any selfie tips, I really need some.

Photos taken in July 2016 #nofilter #nophotoshop (I should have taken some in May when I was slimmest! #regret): 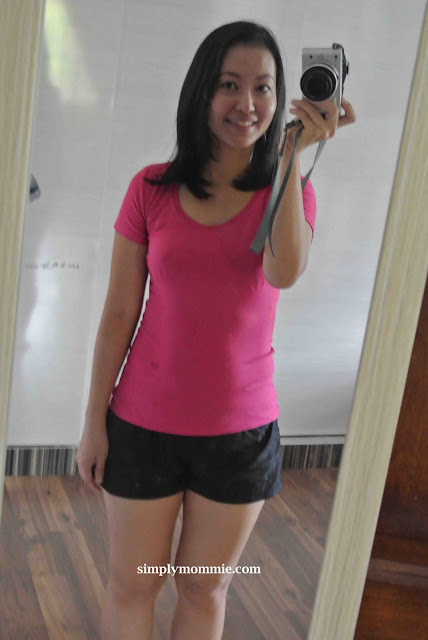 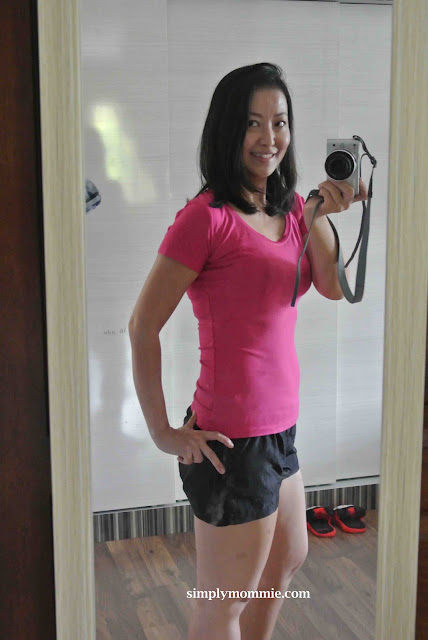 Well, everything’s not just a bed of roses. I’ve sadly regained some of what I lost on my hips and most of what I lost in my thighs due to the holiday period and inactivity in June.

I’m actually wondering if there’s any hope for my lower body because I’ve already been working out quite a fair bit, and it’s been my problem area since puberty. The moment I slack, it just bounces back up.  I think short of something drastic like sleeping in the yoga prayer twist position, as my hubby jokingly suggests, I really don’t know if I can achieve a slimmer lower body by the end of the year, or in my lifetime! Anyway, I hope to give a positive review of how I fared by the end of the year! 😀

Any suggestions to help me on my journey to slimming down?

This entry was posted in Beauty and tagged slimming. Bookmark the permalink.