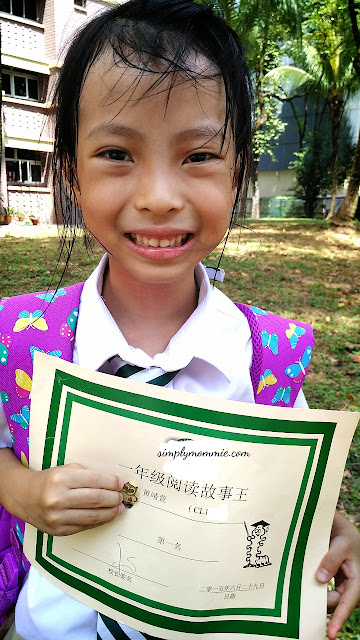 Her first achievement thus far in Primary school is not something we’d have expected say a year or two ago. Unbelievably, she’s topped the standard in the most number of Chinese books read in the first semester. Obviously she didn’t read those books all on her own though – I was the storyteller on most occasions as I was responsible for selecting most of the Chinese books from the library (which don’t have hanyu pinyin), so well I’d have to claim some credit there. 😛

Nevertheless, she was very motivated to read Chinese books (or be read to) throughout the semester ever since the competition started and she even proclaimed that she wanted to win it.

And so she did.

That’s how we started the first day of school of Term 3 – with a certificate, a badge of honour and a happy, motivated girl. We weren’t informed before this so it was a surprise for all of us that day.

This entry was posted in Memories, Parenting, Primary One, Primary School and tagged Milestones. Bookmark the permalink.