Breakfast & food for recess ideas for my P1 girl

Instead of having a book giveaway post for today (as promised last week), I’ve decided to postpone the giveaways till post-CNY so that I can have more time to go through the books for the review 🙂

As promised in my previous posts in the Journeying through Primary One series, here’s the one about breakfast and food for recess ideas!

Long before school started in January, my girl had already told me that she wanted me to pack food for her recess because And not just any food – she stated she only wanted simple food like bread and biscuits. I know – I’m super blessed! No need to rise at 5+ or play with my wok first thing in the morning.

Actually it is a wise choice she made because she knows she takes a much longer time to eat food like noodles/ rice compared to bread and biscuits. Hence until she can speed up her eating, I probably will stick to packing bread.

Here’s some of the food I’ve prepared for her breakfast and recess – I didn’t take many shots or style the food because taking photos at 6 isn’t on the list of my favourite things to do. Most of the time, I’m preparing the food with eyes half-closed. The list here is not exhaustive.

Food options were brainstormed by her in December, and even though she doesn’t exactly like eggs, she agreed to have eggs in different forms – soft boiled eggs, hard boiled eggs, omelette and sunny side up because I convinced her that eggs are extremely good for her 🙂 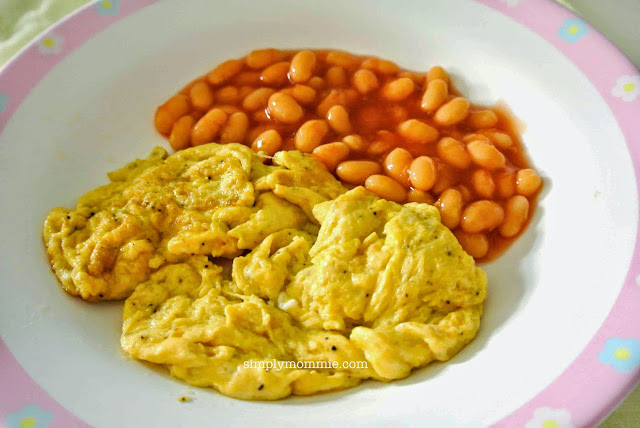 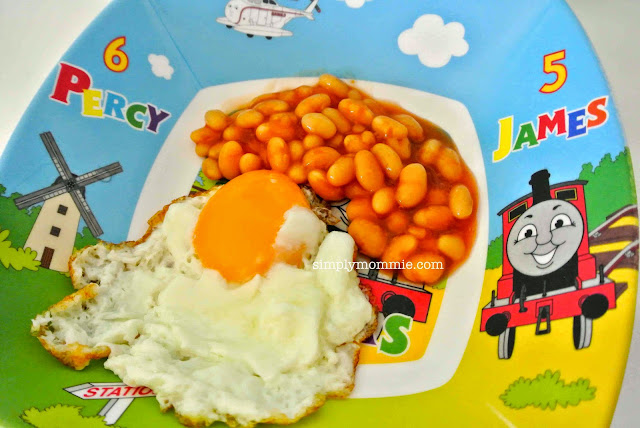 Generally, if I prepare hot food for her, I’d prefer to let her consume it for breakfast rather than let her carry it to school and eat it when it’s turned cold or lukewarm. 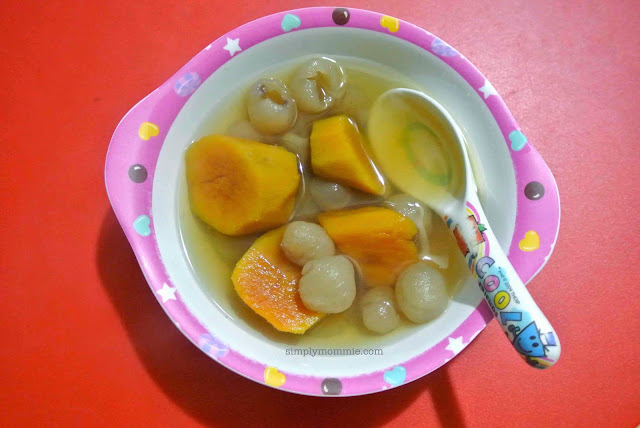 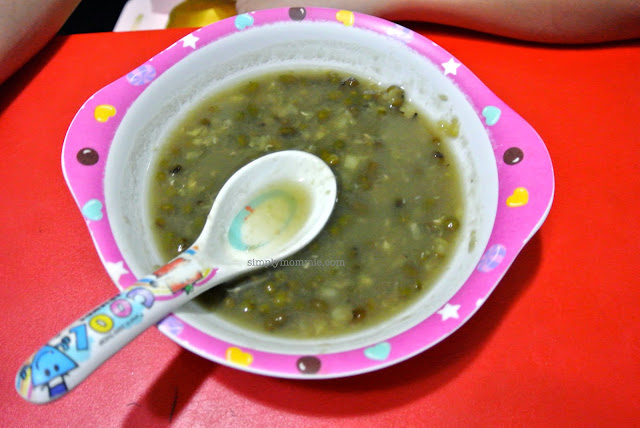 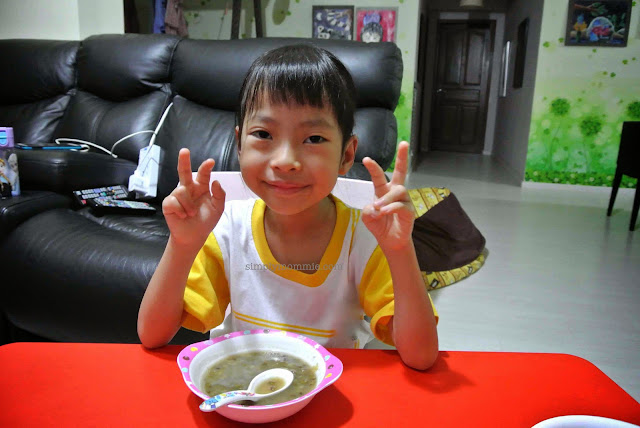 Green bean soup is her favourite! 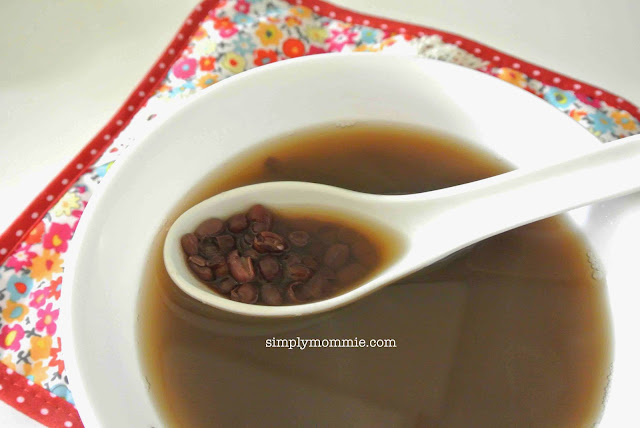 Though she didn’t like French toast much in the past, she now loves it. 🙂 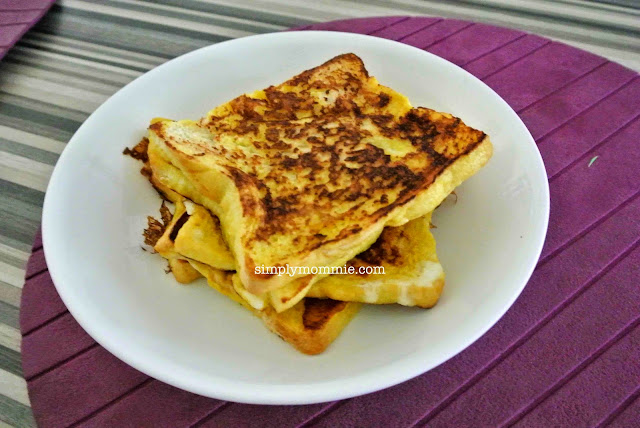 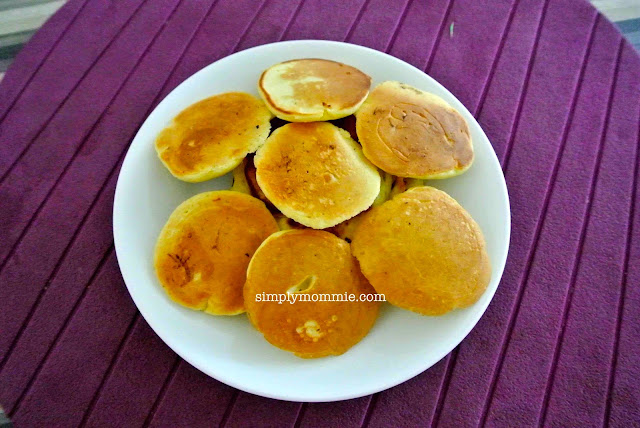 and when I’m feeling really up to it, I use the same Morinaga mix to make little chocolate cakes which is like once in a really blue moon. 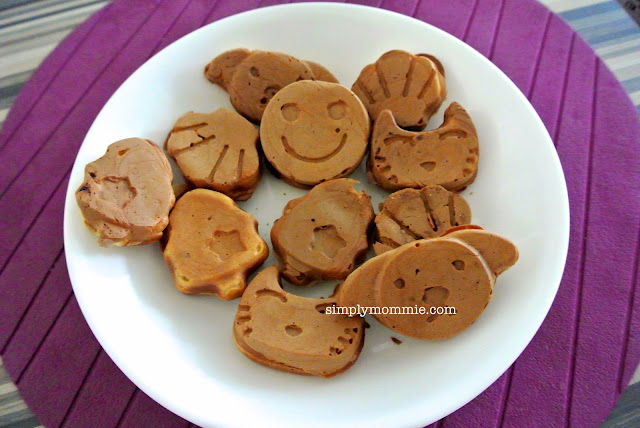 The pancakes and chocolate cakes could be brought for recess too, but I personally prefer that she eats them while they are hot as the mini chocolate cakes are actually crunchy on the outside and fluffy in the middle when they are eaten fresh.

Recently we came across these cute buns and hunted them down in NTUC over the weekend – we grabbed the last two packs! There’s a pig version as well with red bean paste which we didn’t manage to get this time round. These buns are simply too adorable to resist! 🙂 And they taste good too! 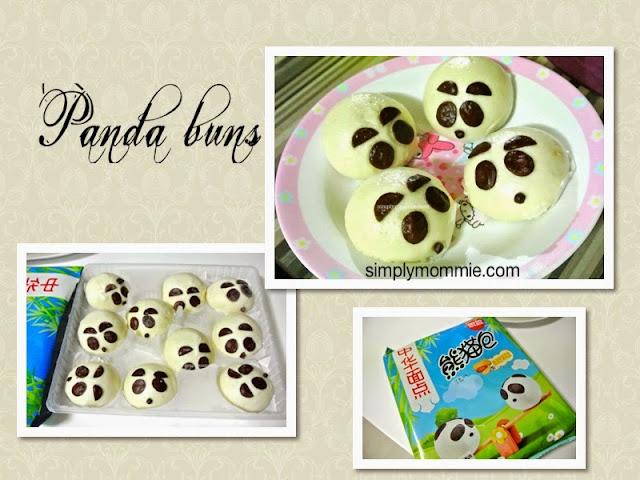 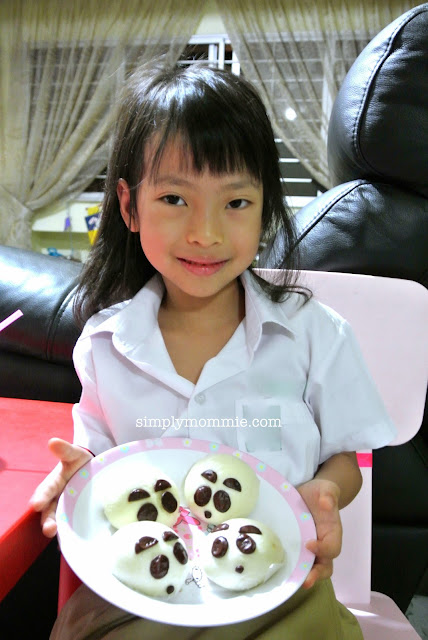 Other breakfast options I’ve given/ am planning to include are sardine / tuna sandwiches (she loves the sardine ones), wholemeal bread with cheese, char siew buns from Crystal Jade, blueberry muffins, mini frittatas and maybe mini burgers when she starts eating faster. It’s not that easy to make breakfast these days considering that we’re trying our best to cut down on processed foods so ham, sausages and bacon are out of the picture and the overnight oats which have been much raved about by others won’t make it to our breakfast table because I’m the only one in the family who likes oats.

Anyway, here are some of the snack boxes I’ve packed for her recess: 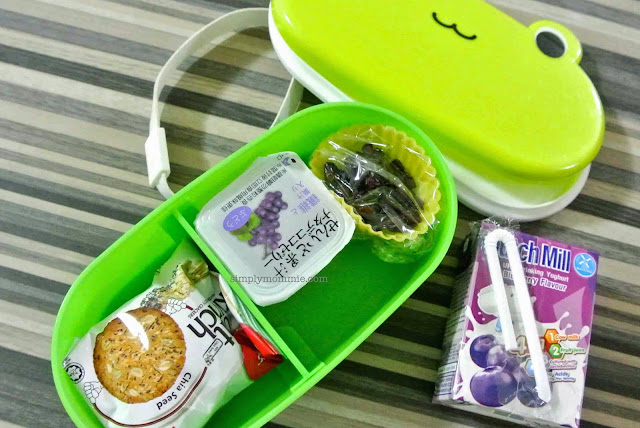 After she discovered that it was cheaper to pack a drink for her for recess compared to buying from the canteen, I’ve been packing UHT milk or other other drinks for her ever since. 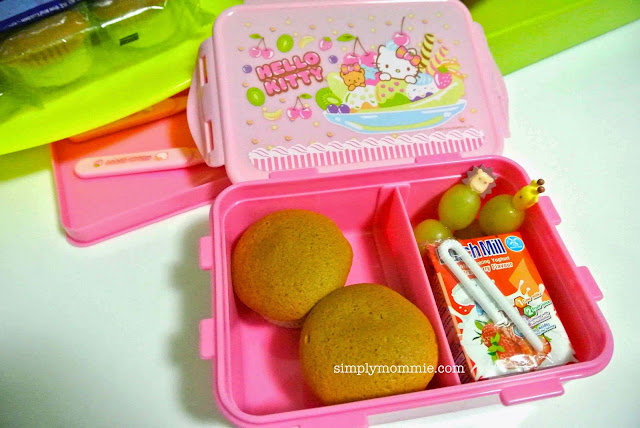 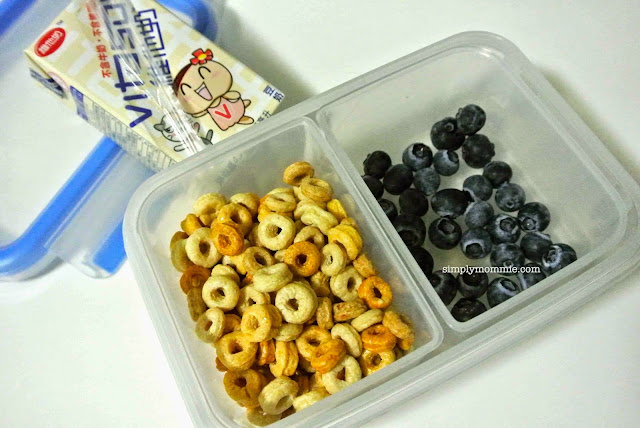 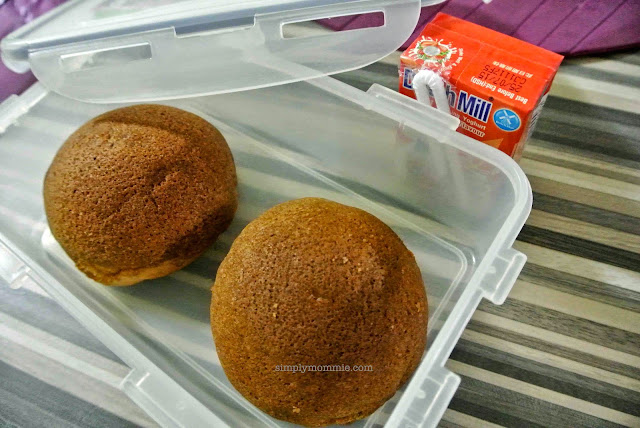 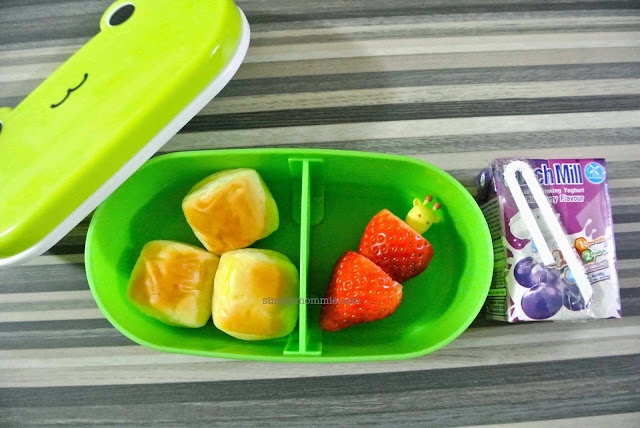 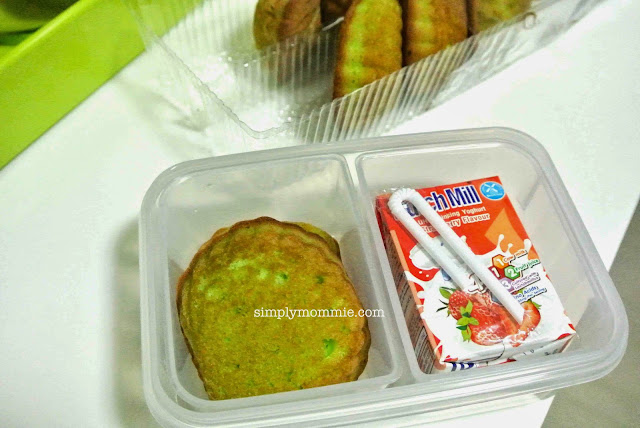 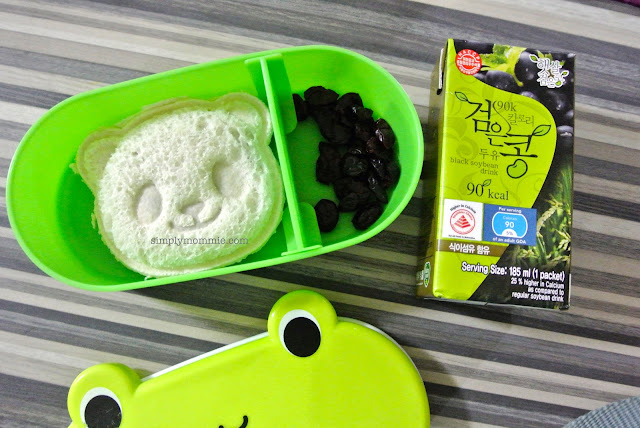 I usually will only pack whole fruits like grapes, blueberries and strawberries – I try not to give cherries because I’m afraid she’d stain her uniform. I’m ok with packing banana and slices of orange too when she isn’t coughing.

Since my food options are limited due to her food preferences, I thought I’d introduce you to some of my friends who are cool wokking mamas! They prepare bentos for recess for their kids. I personally won’t pack cooked food because I dislike cold food (unless it’s meant to be cold like soba noodles) and I think there’s always a chance of it going bad after so many hours in the container. But in case you’re fine with packing cooked food, here are some links to other moms: 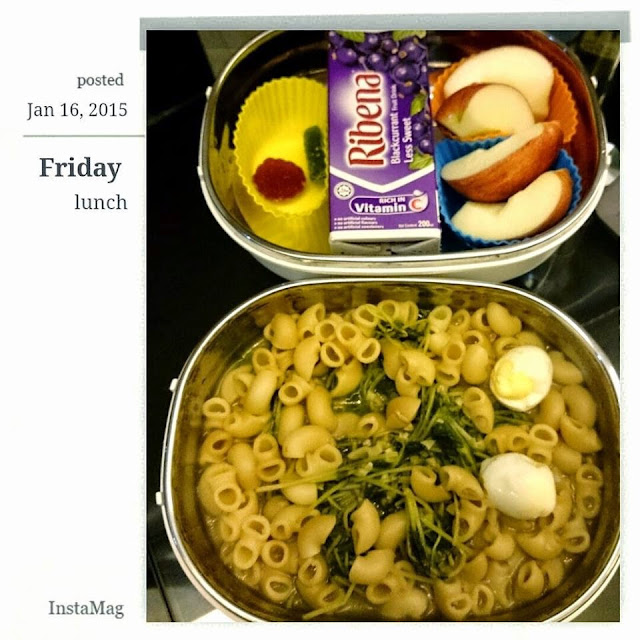 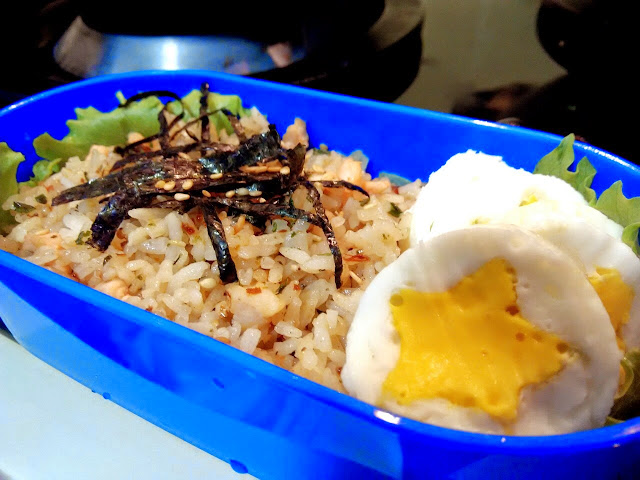 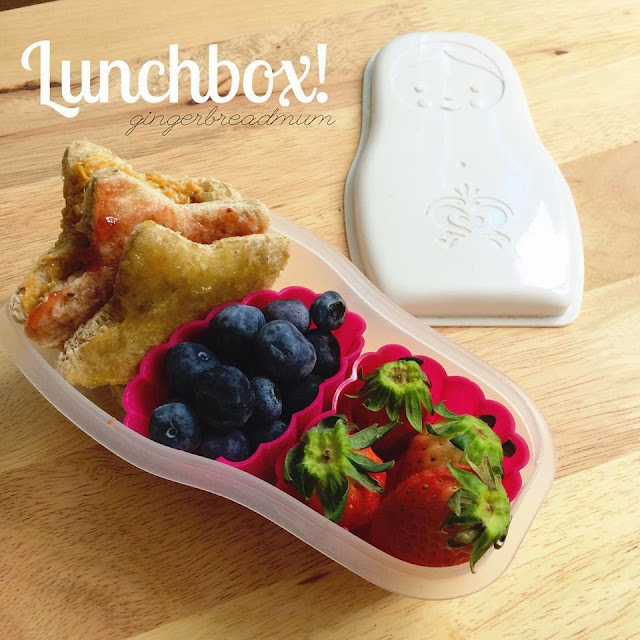 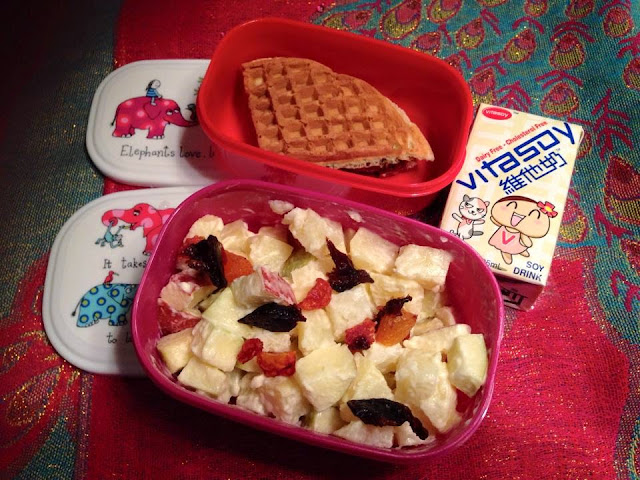 Stay tuned to my next post about our routine for this year!