10 awesome features not to be missed at Changi Airport

To be honest, we’ll only be flying for the first time as a family this coming December. Besides the time that we were given the special opportunity last year to check out the spectacular massive topiaries of famous landmarks from across the world in the transit areas, we’ve not had a chance to step in since our last pre-children trip to Japan in 2007!

I shall start with my personal favourite, though the rest of the features are not in any order of preference 🙂 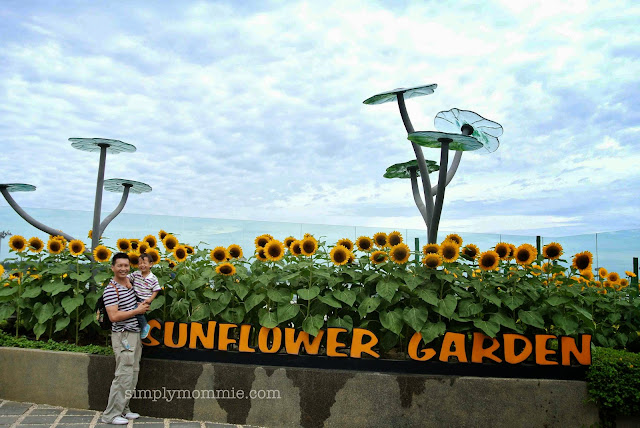 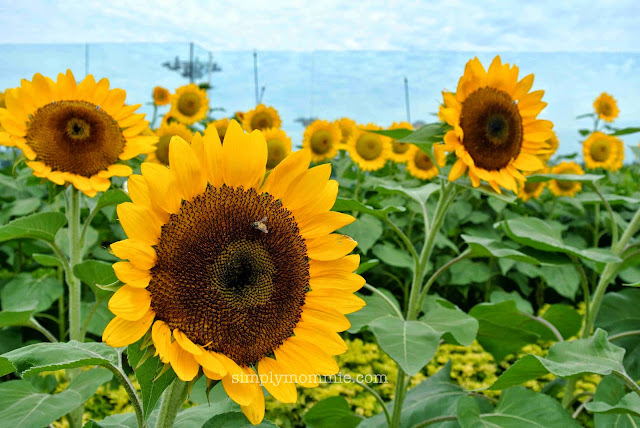 Interesting backdrop for the sunflowers too! The airport’s really such an unlikely place to find a sunflower garden (or any garden for that matter). 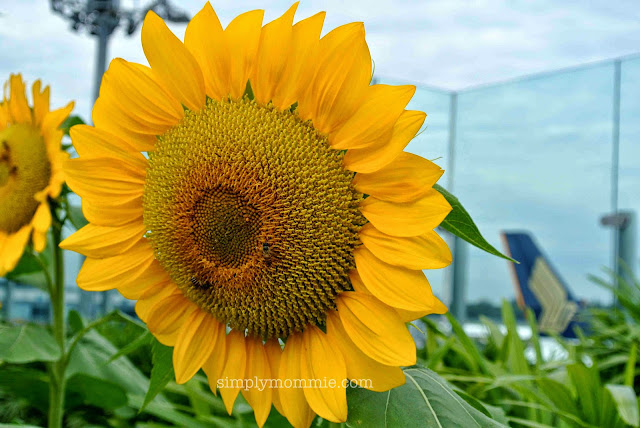 The kids got to see bees upclose as well and the bees were busy at work so there’s little worry about getting stung by them. 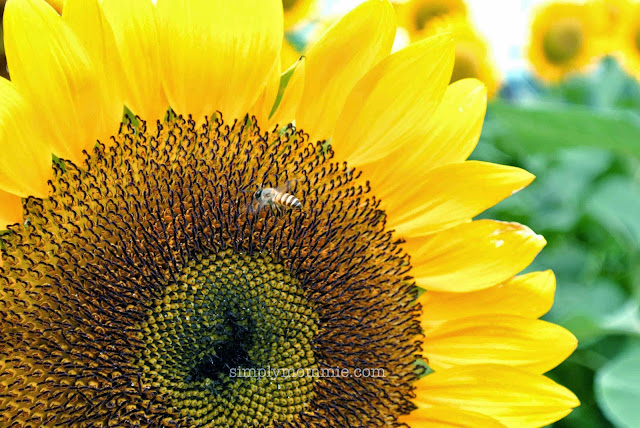 And here’s my favourite picture which was taken (and edited) by David (Daddy of Dana from Princess Dana Diaries): 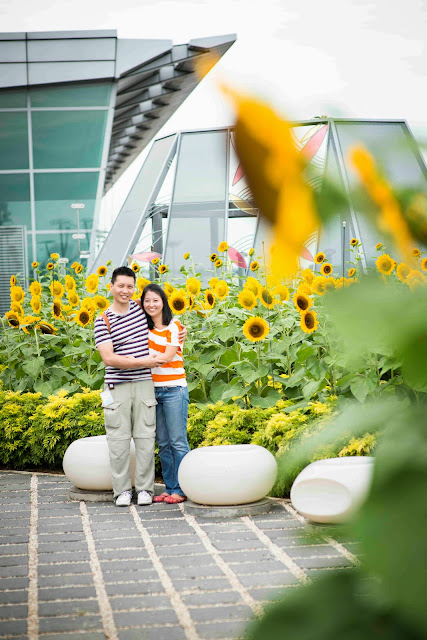 And here’s what else the kids found out they could do there besides admiring sunflowers, studying bees and gazing at airplanes – picking pebbles! LOL. 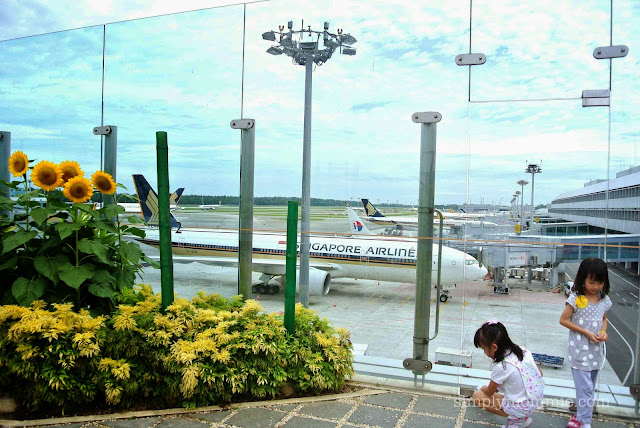 A chance to admire the planes upclose! 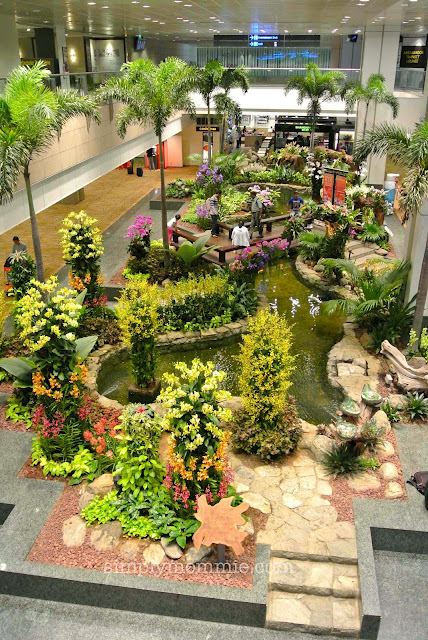 Be wow-ed by the delightful hues of the 30 species of orchids that greet you at the Orchid Garden. The Orchid Garden is home to rare orchids and their hybrids, including the seasonal display of Singapore’s national flower, Vanda Miss Joaquim.

Unlike the Sunflower Garden, this is an indoor garden so if you prefer the air-conditioned comfort, this one’s for you. 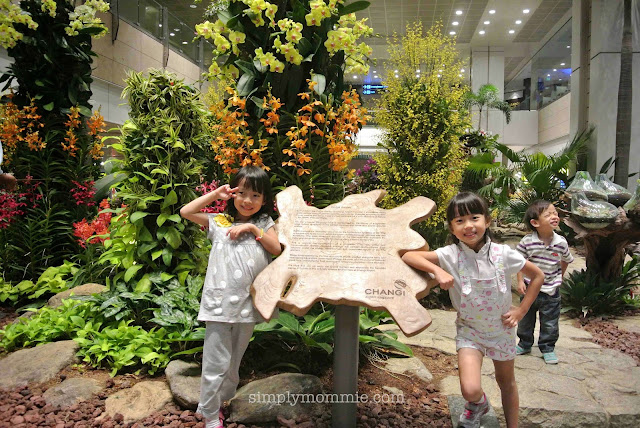 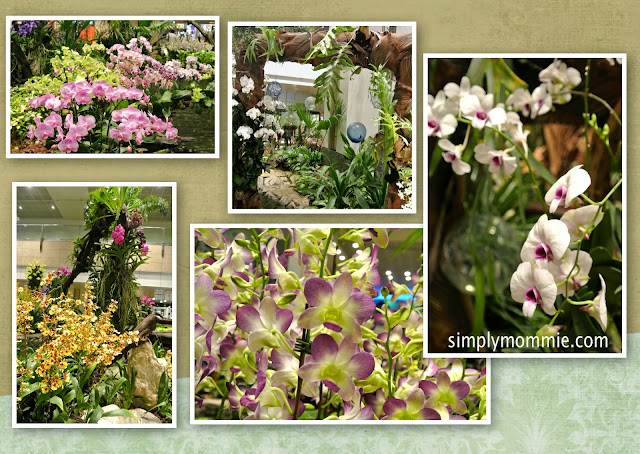 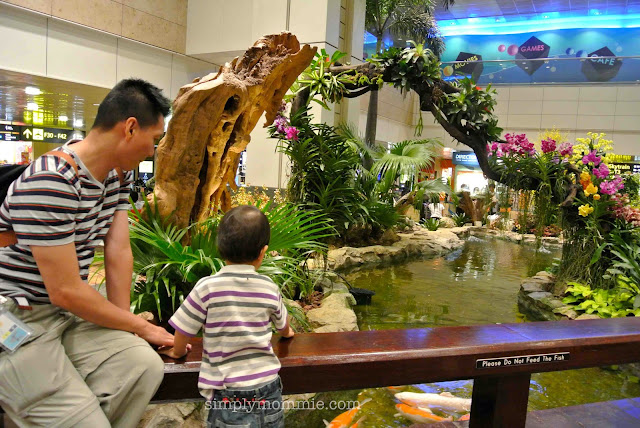 There’s something fascinating about watching the koi swim while you’re on a bridge.

We’re not permitted to feed the koi at this garden – the kids were fondly recounting their experience of koi feeding during our Village Hotel Changi staycation. You can, however, feed the koi at the Koi Pond at Terminal 3, during feeding times. 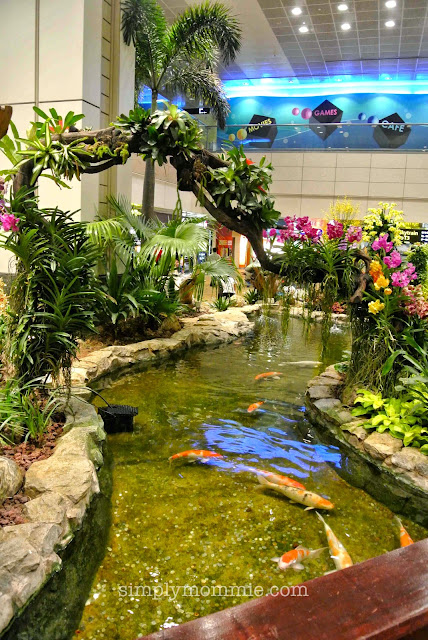 More gardens, you say? The Enchanted Garden – Changi Airport’s newest garden – is not your ordinary run-of-the-mill garden. Equipped with motion sensors, your stroll through the garden would trigger sounds of nature and blooming flowers while fibre-optic and LED lighting, embedded in the pathways, form a mesmerising carpet of sparkling lights. 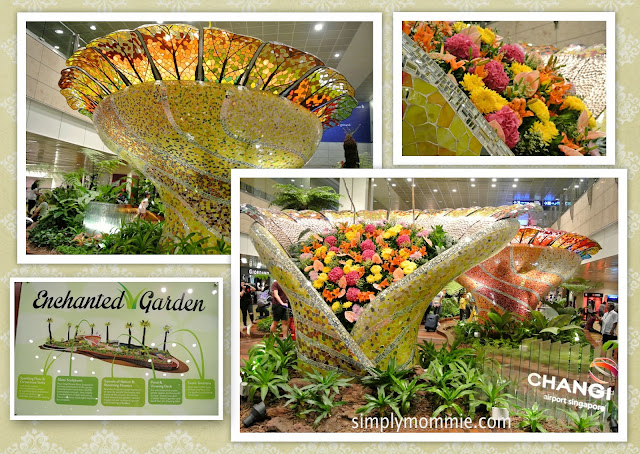 The centrepiece of the garden comprises four giant glass bouquet sculptures, carefully decorated with 56,000 pieces of stained-glass mosaic. Combining light and the plethora of colours, this is bound to delight everyone.

There’s also a viewing deck to admire the garden, koi and archerfish: 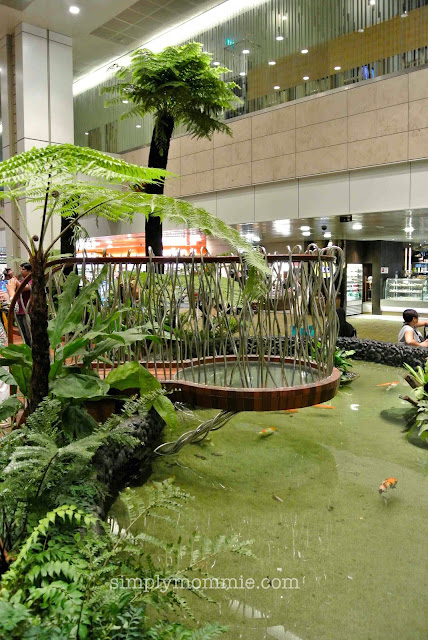 What captivated the children most were the natural sounds of the rainforest and they spent some time trying to identify what they heard: 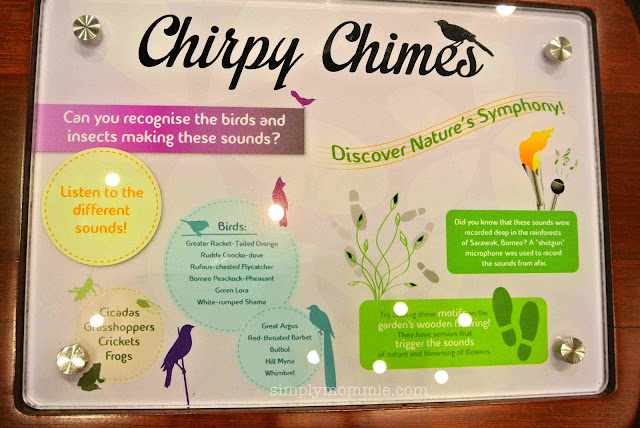 If you’re a fan of gardens, then you’d be ecstatic to know that there are a total of five themed gardens in the three terminals. Besides the three gardens in Terminal 2, there’s also a Cactus Garden at Terminal 1, Departure Transit Lounge, Level 3: 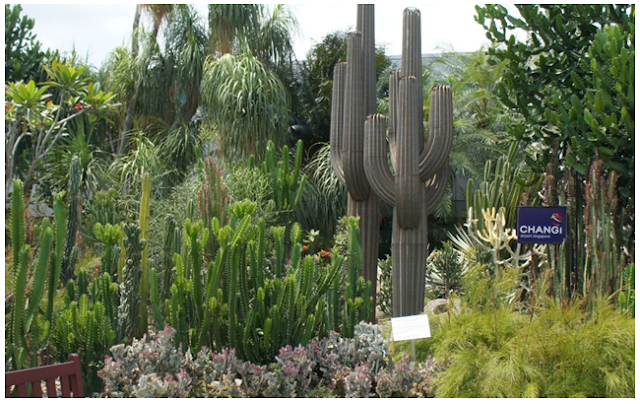 and the Butterfly Garden at Terminal 3.

Nestled in Terminal 3, the Butterfly Garden is home to over 1000 butterflies. Adding to Singapore’s list of firsts, it is the world’s first butterfly garden in an airport. 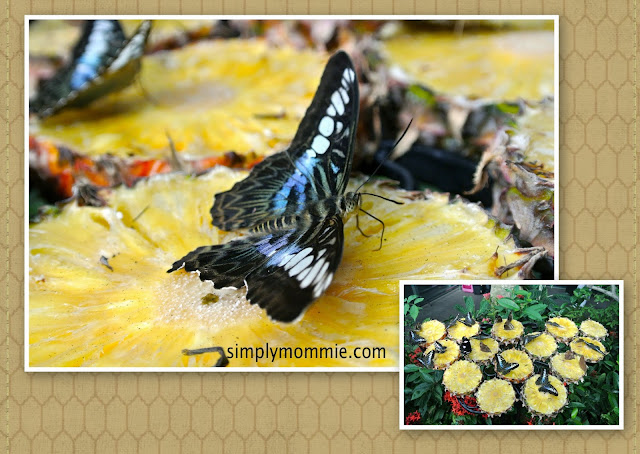 It felt so surreal to be amongst the flying butterflies in an airport! 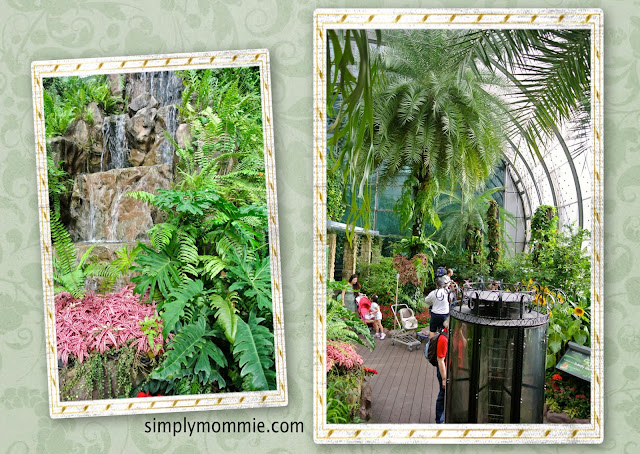 You’re free to observe the butterflies and even to touch them (gently, of course). 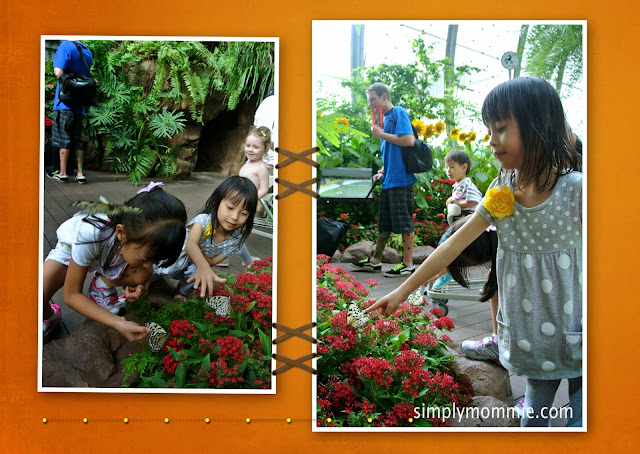 The kids can also gain insight into the life cycle of a butterfly. If you’re lucky, you can even witness the birth of a gorgeous butterfly as it exits its pupae stage and takes its first flight at the Emergence Enclosure! 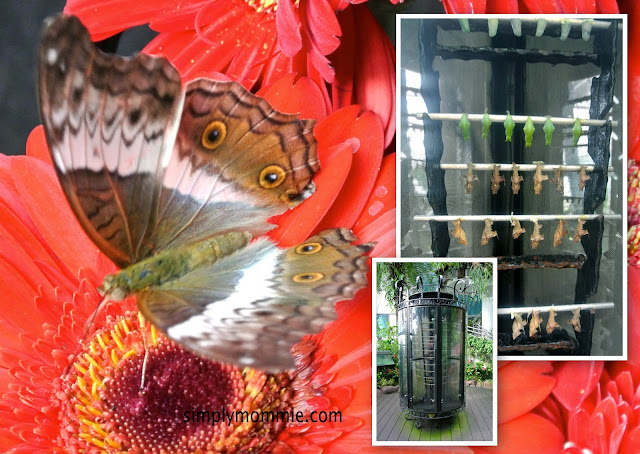 It’s my first time seeing the various stages of the pupa stage, and I was fascinated!!

If you have a gaming streak or you’re a movie buff, and have finished your nature trail in the terminals, there’s an entertainment deck where you can enjoy yourself for FREE! Not that we had to pay for any of the nature trails but y’know, it’s really rare that we get to game or watch movies for free. 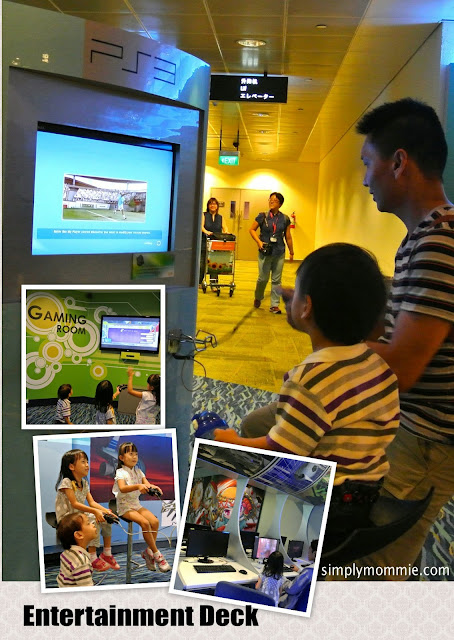 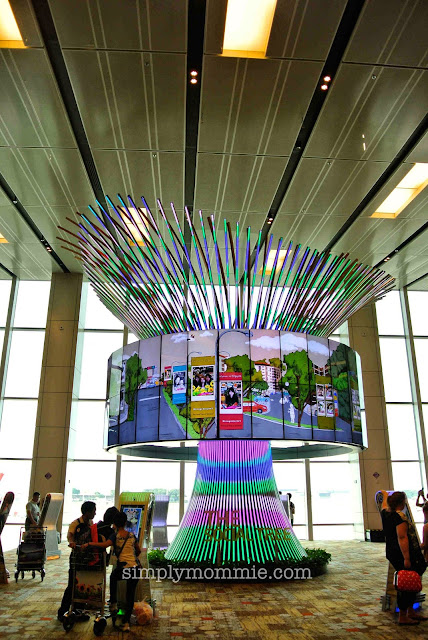 At close to 9 metres tall, The Social Tree is Changi Airport’s largest interactive installation and located in the terminal’s Central Piazza, right after immigration counters and set against the backdrop of aircraft bays.

It allows travelers to snap a photo at any of the eight touch-screen photo booths, jazz it up with effects and icons, and share their photo memories instantly onto the colourful and animated crown of the structure! 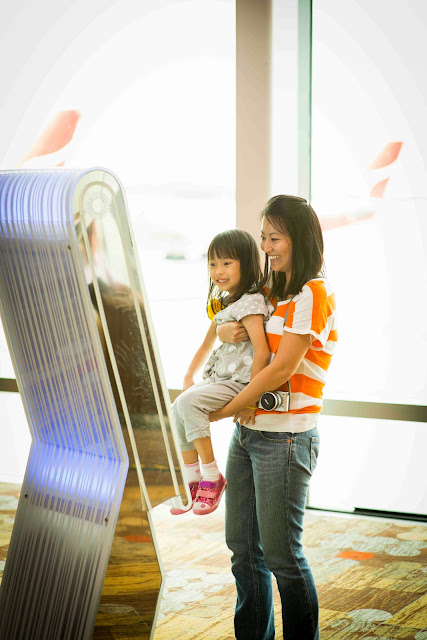 Travelers can also post photos and videos taken at the booths on their social networking profiles or email it to themselves. It’s really so simple we just had to take a couple of shots!

So what are the photos for? Taking a photo at the Social Tree is more than just to satiate needs to take selfies wherever people go. It is wanting to be part of Changi Airport’s history – by leaving behind a photo or video of themselves which will be kept for 100 years. Travelers and their families can retrieve and re-live their digital memories at Changi Airport from this memory capsule… so when my grandchildren jet off somewhere next time, they would be able to view our photos! #ifeeloldalready 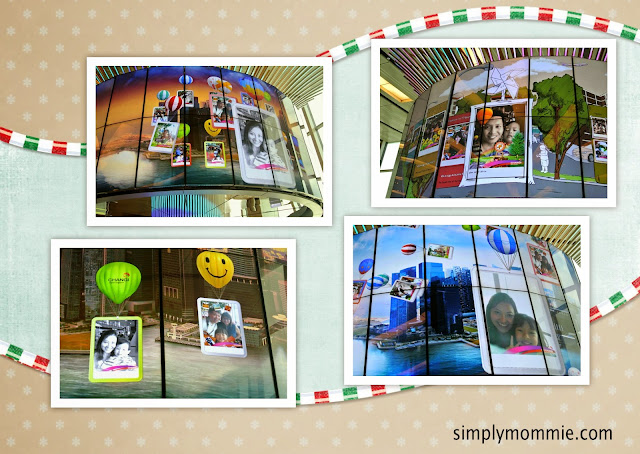 Just next to the Orchid Garden is one of the popular woodblock rubbing stations. We used to head to the public area at T3 just for this after our dinner because my girl loved it so much!

Woodblock rubbing was a popular Singapore art form in the 50s and 60s. The kids were so thrilled with their woodblock rubbing of icons they are so familiar with (e.g. Changi Airport, the Singapore Zoo, rickshaw) 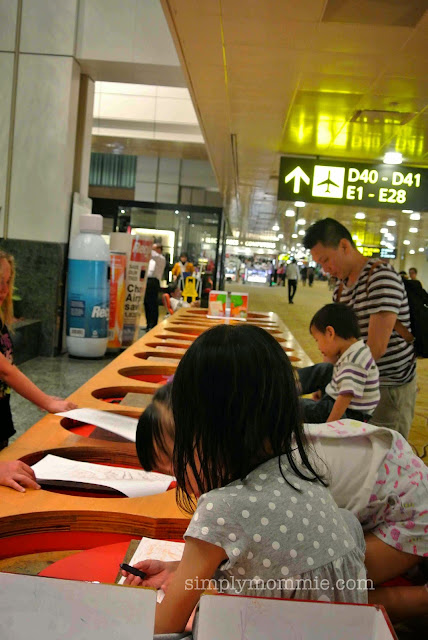 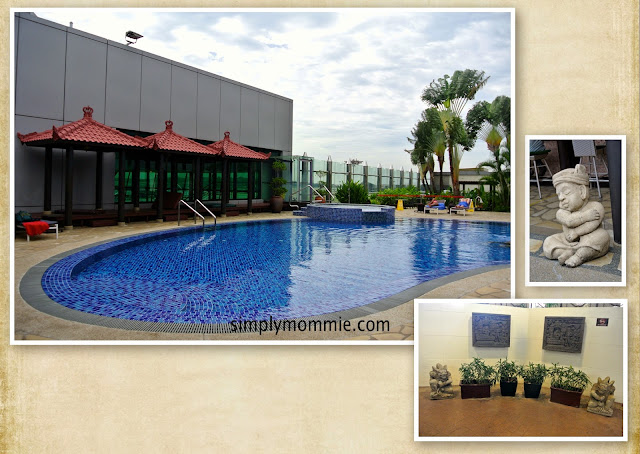 Located near the Departure Transit Lounge East on Level 3, the Balinese-themed swimming pool is free for guests of the Ambassador Transit Hotel. If you’re not a guest of the hotel, a fee of S$13.91 is charged for the use of the swimming pool and jacuzzi, including the use of the shower facilities, a towel and a complimentary non-alcoholic drink from the bar. Operating hours: 7.00am to 11.00pm, daily 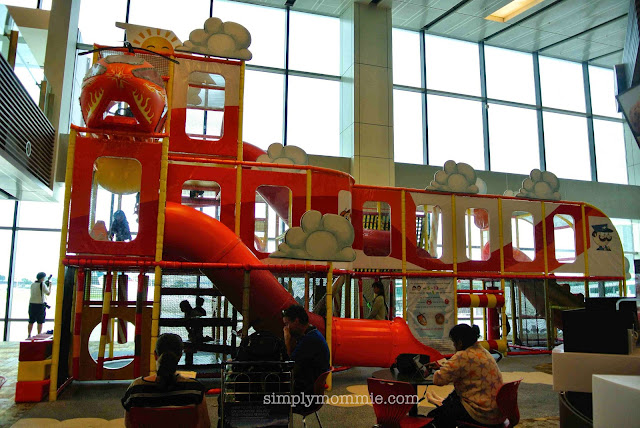 After an afternoon of exploring the airport, the kids still managed to go berserk at the playground. Where in the world do they get their energy from???

Anyway, if you have time to kill and the kids love playgrounds, you can literally grab your coffee (there’s Wangz Cafe just right next to the playground) and you can sit there and enjoy yourselves!

and there’s one at Terminal 2, next to Family Zone at Departure Transit Lounge North, Level 2 (but it’s currently closed for upgrading).

If you have kids, you would know it’s almost impossible to do proper shopping with them in tow. And since I’m sure you’d agree that they’d rather spend the time they have in the transit area exploring nature, playing games or working out at the playground, here’s the ultimate convenience Changi Airport has provided! 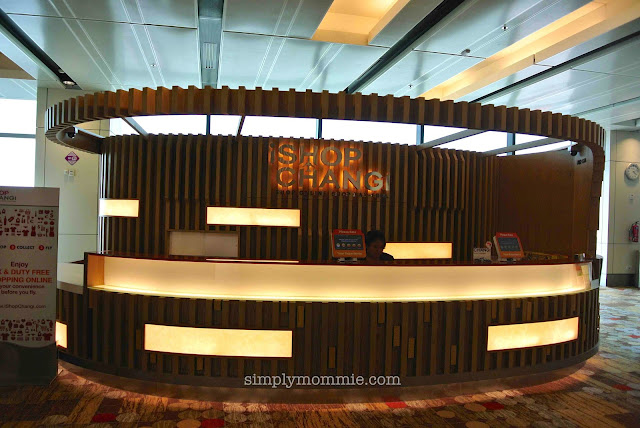 You can shop online at home on Changi Airport’s online retail portal, www.iShopChangi.com, leisurely, without the ‘are-you-done-yet’s and tug-of-wars, and pick up your purchases at the collection centre located at the transit lounge of your departure Terminal on the day of your flight (there’s one at each terminal).

Besides these 10 awesome features, if you’re travelling with young babies or toddlers, you’d be glad to know that there are over 20 baby care stations (check out the directory) where you can tend to your little ones with the privacy you deserve. 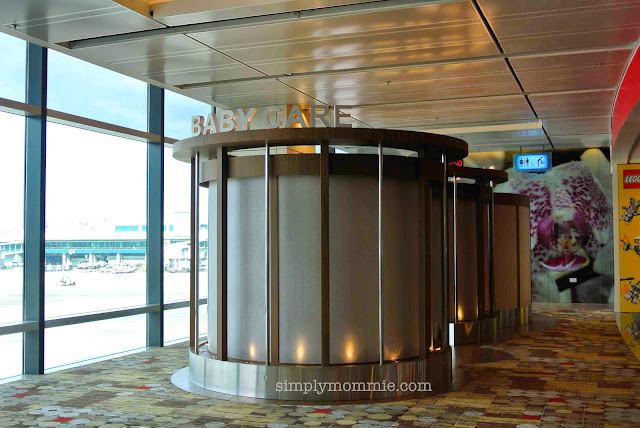 There’s so much to do at Changi Airport that we’ve never imagined possible at airports. Who’d have thought exploring nature possible at an airport? With the multitude of food choices, comfort of carpeted floors, abundance of places to rest and snooze (see the list here – no wonder it was voted to be the best airport in the world for sleeping!), free foot massage machines to ease your weary feet, free internet connectivity, free charging points for your electronic devices, free 24-hour entertainment, and art installations to provide soothing and calming relief from the stresses of travel, Changi Airport truly deserves to be the world’s most awarded airport with over 460 awards (and counting).

If you’re still unsure what you want to check out while in transit, Changi Airport has got it planned for you based on the number of hours you’ll be in transit – click for recommended transfer experiences.

Disclosure: We were invited for a blogger staycation programme by Changi Airport Group to explore the wonderful opportunities and experiences that the airport provides. All opinions are 100% mine.