{Review} I Theatre – Puss in Boots

If you’re wondering if I Theatre’s rendition of Puss in Boots followed the plot of DreamWork’s animation with Antonio Banderas as Puss – which was exactly what my daughter associated the story with initially – it’s actually closer to the original European literary fairy tale about a cat who uses trickery to gain power, wealth, and the hand of a princess in marriage for his penniless master.

A Rather Intelligent cat.
A Rather Foolish youngest son.
A Pair of Magical boots.
An Ogre, a King and a Princess.
All the ingredients you need for a fun-filled fairytale musical for the whole family!

Indeed, the 55-minute fast-paced musical was full of trickery, quick thinking and courage in the face of Foolish Fashionistas, Random Royalty and Evil Ogres. As usual, there’s the interactive portion in I Theatre’s productions and in Puss, Puss (the talking cat) guided the audience to pronounce the phrase “Marquis of Carabas” which was written on flash cards. Then we all sang along with the cast to a song with “Marquis of Carabas” making up part of the lyrics. I really like how I Theatre makes it a point to engage the audience during their shows (we’ve caught Grimm’s Fairy Tales and The Ant and the Grasshopper – the children were even asked to stand up and exercise with the Grasshopper in the latter!).

The show also included the signature dance move from Psy’s ‘Gangnam Style’ which definitely didn’t go unnoticed by the audience. Apart from keeping the kids entertained, I’m sure the adults caught the amusing puns on the King and Princess’s shopping bags – Dolce & Banana, Ducci and Prata.

Although I Theatre’s version of Puss follows the general storyline of the rags to riches transformation, there was an emphasis on honesty and compassion which makes it all the more a family-friendly musical.

Despite the show being about Puss and his Master, it was Ogre Queen Arugula Funghi (yes, quirky names for the characters!), however, who completely charmed me as she stole the show with her unmistakable French accent and witty humour.

The costumes for Puss in Boots are the most outstanding among their productions I’ve caught! 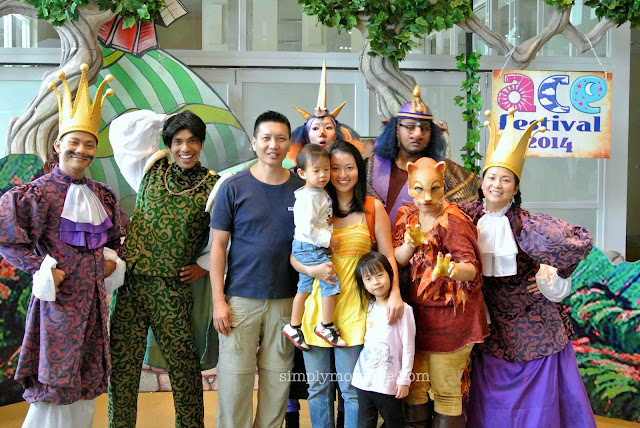 The must-have photo moment after the show during the Meet & Greet session!

If you missed I Theatre Puss in Boots, you may want to catch their upcoming production in July – Round the Moon, Blue the Sky (suitable for 2-8 years old and families).

Synopsis and ticketing information can be obtained at SISTIC.

Disclosure: We were invited to the performance. No monetary compensation was received for the review.