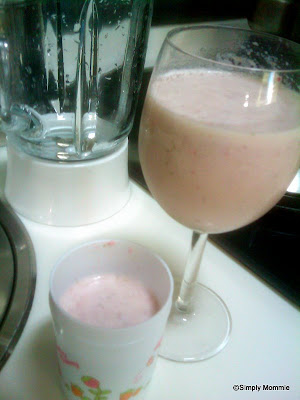 *I forgot to charge my camera battery last night and so the photos were taken with my lousy hp camera… and I had to take the photos as quickly as possible since someone was screaming her head off shouting ‘bao bao!’ Sigh…

anyway, I think I need to go get a proper glass to showcase the drinks in future: this wine glass is rather inappropriate for the drink!*

My hubby reminded me to finish up the banana that was becoming too ripe last night and so this morning, instead of using the banana to make banana muffins for breakfast (which is what I’d usually do), I decided to make a banana smoothie instead since I had milk in the fridge.

Since I only had one banana, I thought it’d be nice to have a stronger fruity-tasting smoothie (not to mention a visually more appealing one too) – so I added strawberries into the blender. Anyway, the strawberries I had in the fridge weren’t particularly sweet so I had no qualms about blending them in my drink – it’s better to have them blended than to have to endure the sour fruits at night… 😛 The thought of that just made me put more strawberries than I think I would have… had the strawberries been sweet and yummy, I might have held back a little… hehe.

Anyway, so Alicia and I had banana strawberry smoothie as part of breakfast today. It’s her first time having a smoothie and she drank about one baby cup – that’s good enough for a start! She had a couple of mouths of cake here and there with sips of smoothie in between and then she decided she’d had enough, got out of her chair, got me to wipe her mouth and off she went to play! 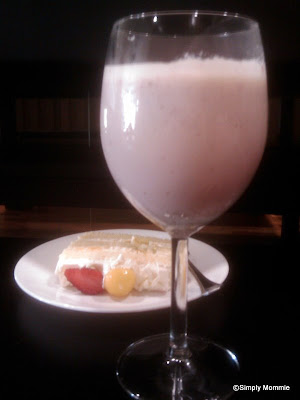 This entry was posted in Breakfast ideas, Drinks, Food for kids, Recipes. Bookmark the permalink.