Remember these keyboard cards I made? I actually neglected them for awhile but after chatting with one of my friends a couple of weeks ago, I decided that it was time to start using them proper instead of letting them sit around the house! 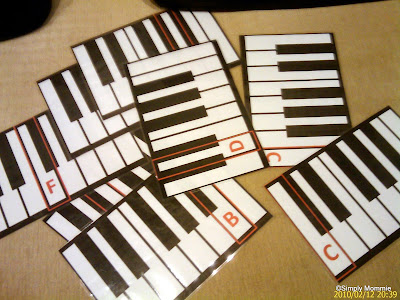 *Hop over to Simply Mommie’s Precious Handmades to view this learning aid and other interesting learning aids! :)*

And so I got down to doing it: I punched a hole in the cards and strung them together using a ring binder and I’d just go through the cards with Alicia at least once a day, whenever she was willing to sit down for a short while to let me do that with her. Within a couple of days, she was able to look at the cards and pretend to press the ‘key(s)’ with her finger (that’s what I do with her) and say the right alphabets for some of the cards – when she’s in a really good mood! 😀 At least I know that she’s been paying attention and absorbing the information so even though she doesn’t name the notes every time, at least I know that there’s something going on there in that little inquisitive brain!
Anyway, today since we had a bit more quiet time in the room together before naptime (and before she asked for milk), and since she was hanging around my books near the bed, I decided to read this music reference book with her to add on to the keyboard cards for today’s music lesson (with Handel’s Water Music playing in the background): 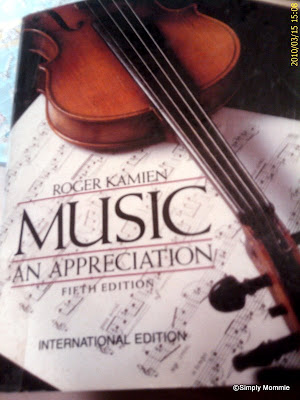 It’s a really thick reference book which I bought when I was young while I was still studying music theory and I happened to have brought this book along to my place after I got married. Since we were both free and she was scouting around for a book to read, I thought, well, why not try it? And so we both sat down on the bed and read about music instruments and though the illustrations weren’t fabulous (I mean, it’s a general music reference book after all), the (black and white!) photos of people playing the instruments were able to capture her attention. We managed to go through all the instruments – from the string, woodwind, brass and percussion families!

This entry was posted in Homeschooling, Teaching Music. Bookmark the permalink.