Since our last trip to Legoland, the kids have actually been asking to return for more fun and to stay at the awesomely cool Legoland Hotel.

This time, we were invited to return to Legoland for the ultimate family Halloween Party night! 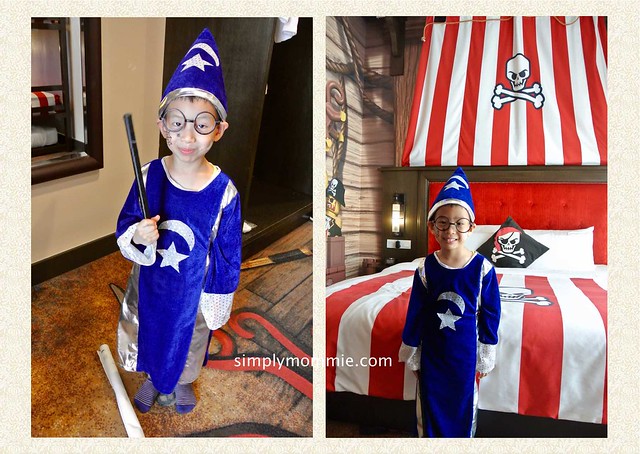 All decked up and ready as Merlin the Wizard! We’d left our girl’s props in the car so we only got her ready when we were about to enter Legoland theme park.

WHEN is the Halloween party? 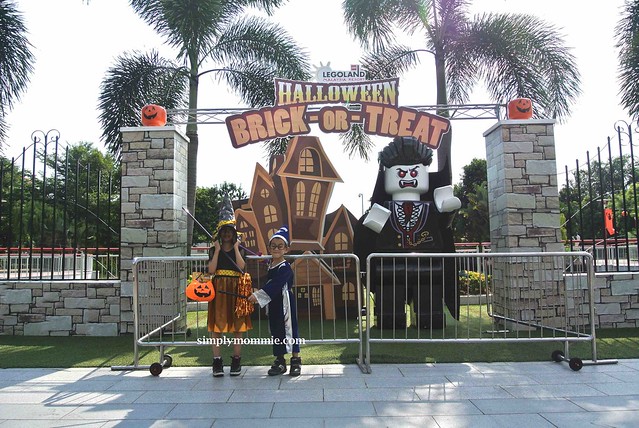 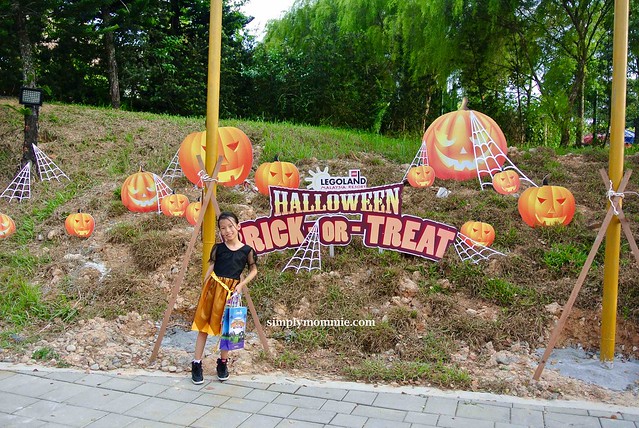 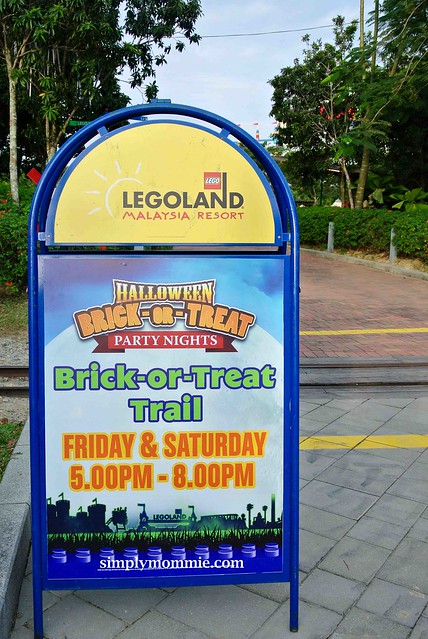 WHERE is it located?

LEGO® Kingdom will be dressed up in the most spook-tastic décor with large lighted pumpkins, cute supersized spiders and cob webs, bats, and scarecrows to scare and delight Halloween lovers. 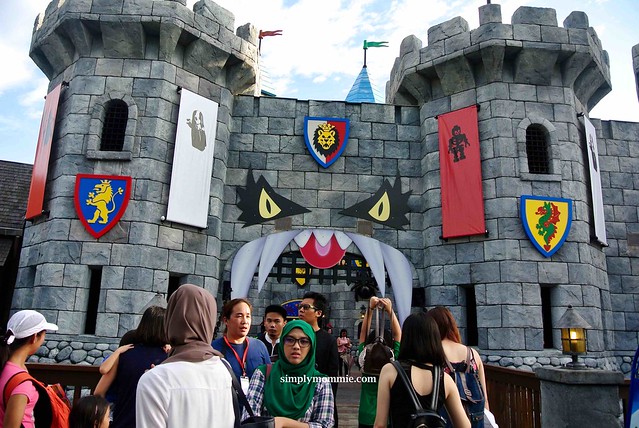 At Lego Kingdom, Monster March will greet you at the start of the Halloween hours signalling the beginning of the Party and bid you farewell with a thrilling dance at the end of the day. 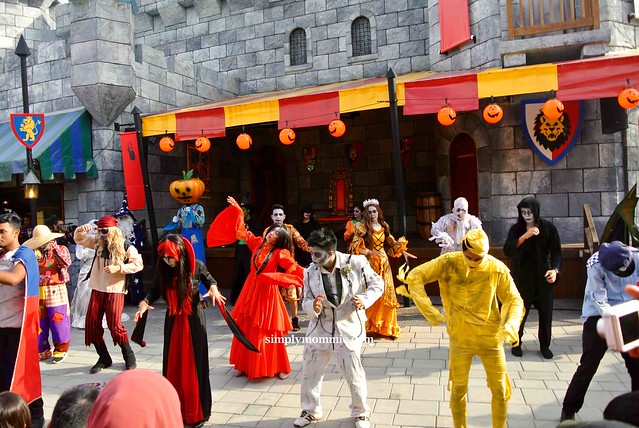 HOW to go on the Brick-or-Treat trail

For this year’s Brick-or-Treat trail, there are 10 pop-up huts with goodies sponsored by Malaysian local favourites such as MILO, Staedler, Julie’s, Haribo, Ribena, and Canon.

Before you can start, you need to get the Brick-or-Treat map from Guest Services at the entrance of the theme park if you weren’t already given one sheet per child when you entered. This is very important. Without this, your children cannot participate in the trail. We know because my husband had to walk all the way from Lego Kingdom back to the entrance to get copies for the kids. We were definitely smarter the next night! 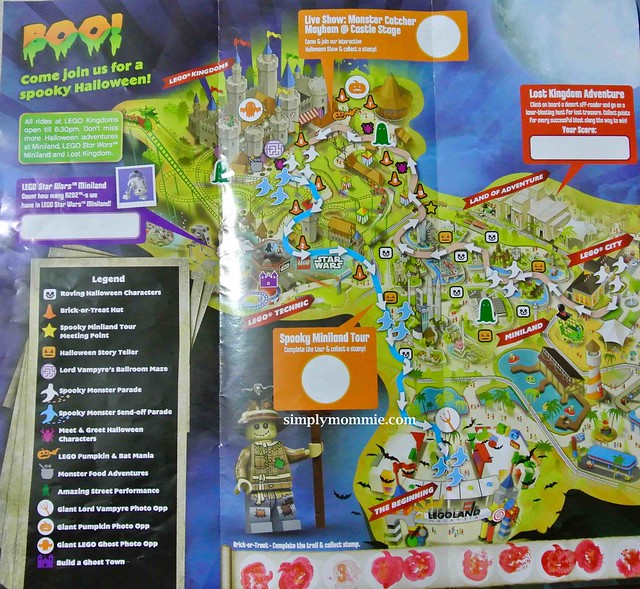 We went around the 10 huts in sequential order and managed to score some photos with the characters when the queue wasn’t too long. 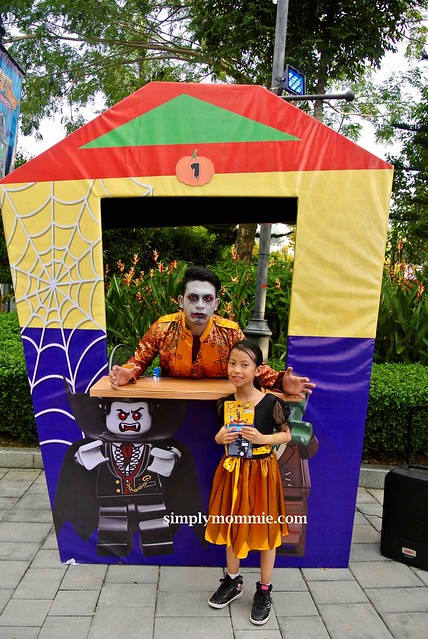 Collect the Halloween paper bag for the trail!

We went back on Saturday night for the trail and it was a little different. Instead of merely collecting the empty bag, we were also given 9 lego bricks. At 8 of the huts subsequently, we were asked for a brick in exchange for the goodie. 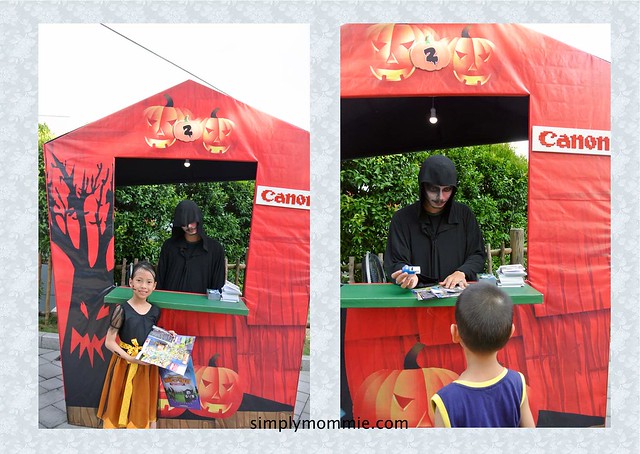 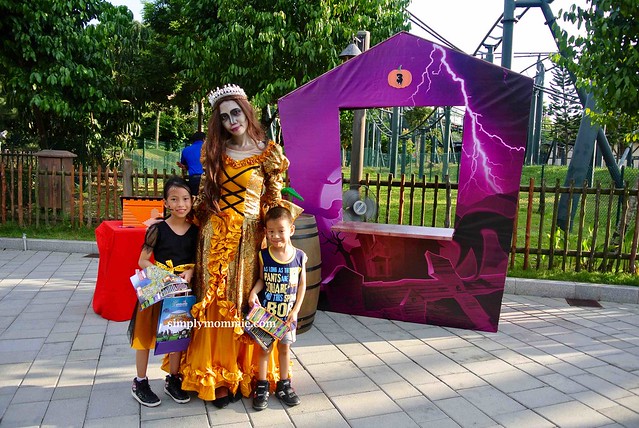 I think we only got a stamp on the map for this hut. Similarly so on the second day we were there – no exchange of a brick was necessary. 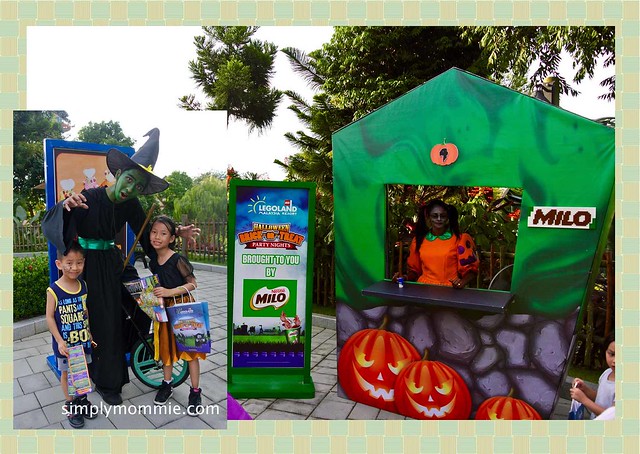 The kids got a Milo pencil box each from this hut. 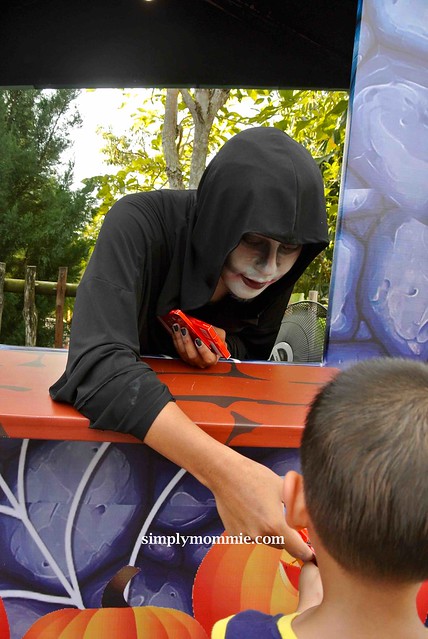 The fifth hut was a little different. Instead of just exchanging a brick for a treat, they were tasked to count the number of bats in Lord Vampyre’s maze inside the castle. Even though we didn’t get the answer right on the first day, the kids still got a small box of colour pencils each. 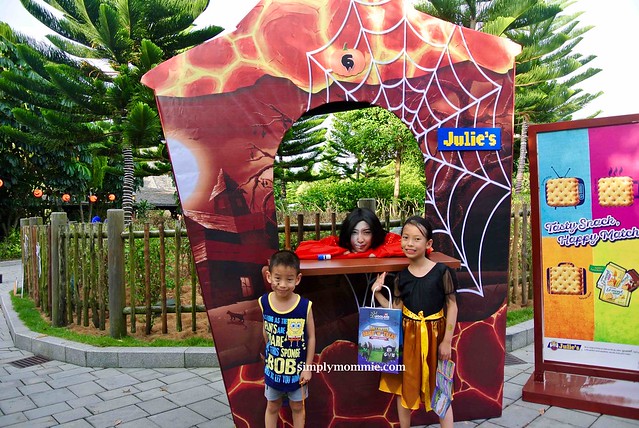 A pack of biscuits! 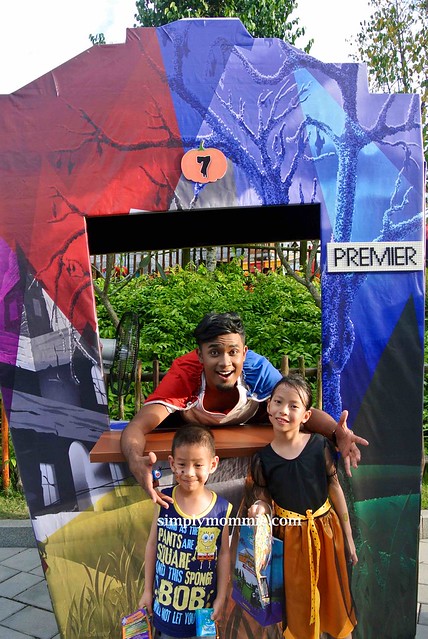 A pack of tissue paper 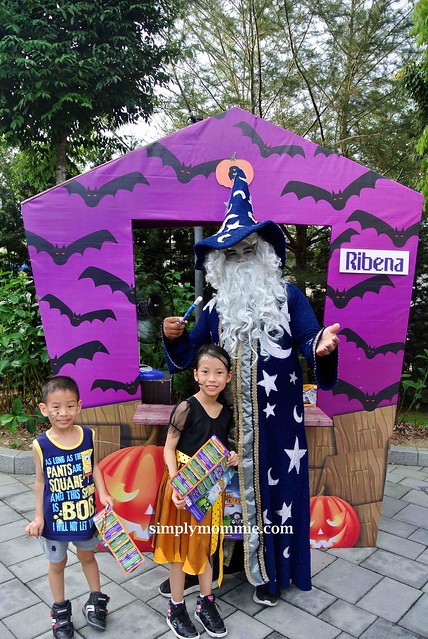 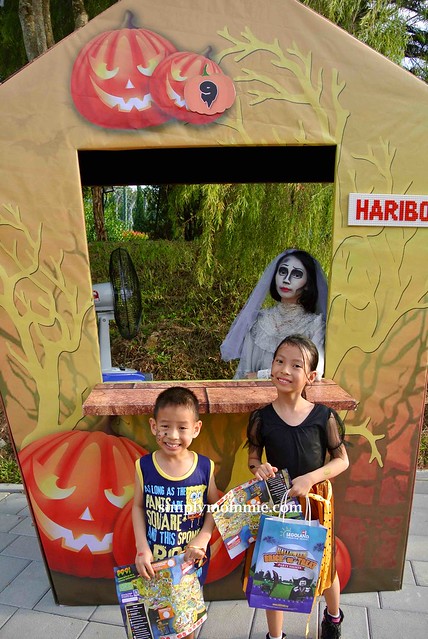 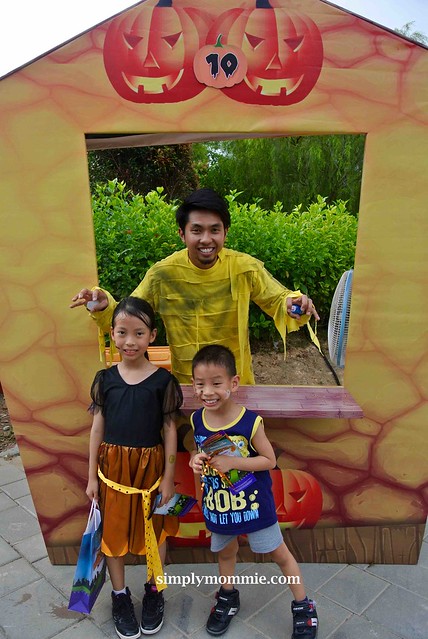 Also, after the trail, at the last hut, you will receive a limited edition Halloween commemorative brick: 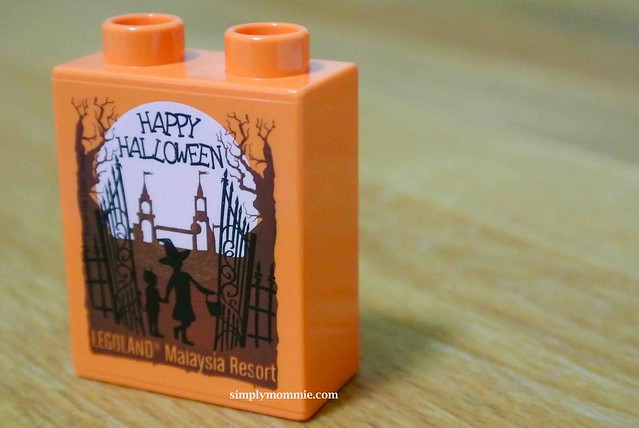 Other than the Brick-or-Treat trail at LEGO Kingdom, there will be a terror-rific interactive Halloween Show with LEGO Frankenstein and Witch @ Castle Stage at 4p.m., 6p.m. and 8p.m. 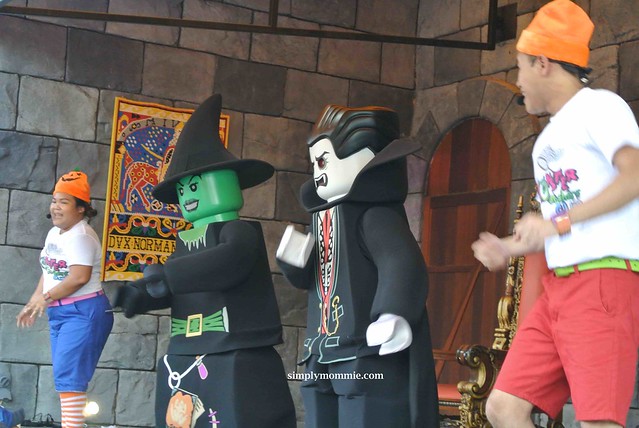 Other details to note:

If you are having dinner at Legoland Hotel’s Bricks Cafe, the restaurant is also nicely decked up in the Halloween theme, as is the Legoland Hotel lobby. 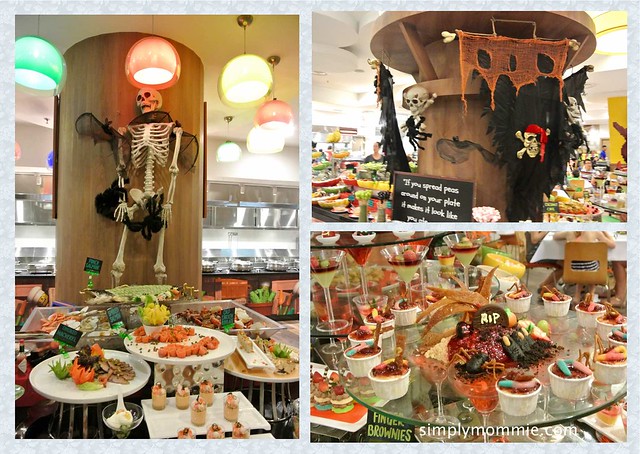 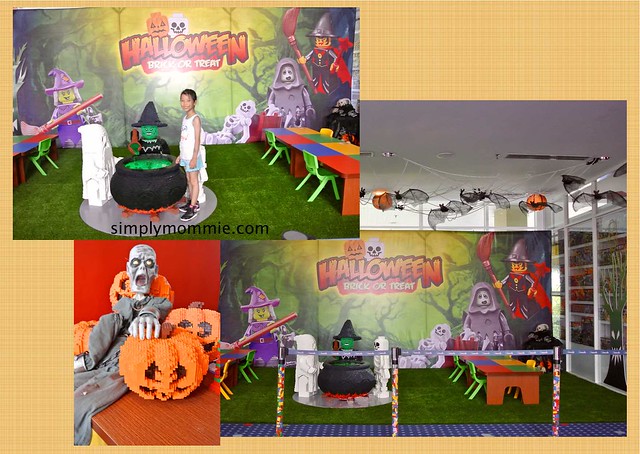 If you are game for some fun over a weekend, I’d recommend a trip to Legoland theme park! In fact, I think you should make the trip there worthwhile by buying the usual day pass as not all rides are operational past 6p.m. If you are only interested in Legoland Malaysia Halloween 2016, you can buy your tickets here.

We had so much fun at Legoland this time round as my boy is finally tall enough for most rides – though not old enough for all rides! We’ll be back!! 😀

Disclosure: My family and I were invited to experience Legoland Malaysia Halloween 2016. We were provided with a night’s stay at Legoland Hotel and combo tickets for two days. No other compensation was received.