Since we got married, I’d never cooked fish porridge for my hubby until this year. You see, we are generally gluttons, so as you would expect, fish porridge won’t fill our stomachs up much. In fact, I’d only cooked fish porridge once – for myself – when I was down with HFMD together with my then 4-month-old daughter when he went for his cousin’s wedding dinner. I know, it’s odd that I remember such things in detail, but if you were in such pain, I think you’d remember quite a bit.

Alright so somehow this year, our appetite shrunk a little, at least on some days. And lo and behold, one day the hubby asked if I would cook him fish porridge. I asked him if he was ill because in all these years, he’d never asked for fish porridge and almost always had something to say when his mum cooked it. He declared himself to be well and just wanted to start eating ‘light’. Anyway, to cut the long story short, we started to fall in love with the simplicity of fish porridge and my family kinda survived on it for the two weeks I was down with a very bad strain of flu and cough a few months back. And now we have it at least once, if not twice, a week. I’m secretly glad because this is really easy to cook. 😛

For my fish porridge recipe, it’s done up differently from other recipes that I’ve come across. This is the way my grandma used to cook it and it was passed down to my mum and now to me.

5.0 from 1 reviews
Print
Fish porridge recipe
Author: Simply Mommie
Recipe type: Mains
Cuisine: Chinese
Serves: 3-4
An easy and light tasting meal that is extremely nutritious.
Ingredients
For marinating the cod:
Instructions
Notes
1. Using cod makes the porridge taste smoother. You can use threadfin or red snapper in place of cod - the porridge will still be sweet but it won't be as smooth. Instead of frying the threadfin or red snapper, steam them with ginger and scallions. Use only the flesh (discard skin and bones). In a separate sauce pan, fry the garlic in 1 teaspoon of oil. Add the fish and the garlic (together with the oil) into the porridge 10 minutes before the porridge is done.

2. I usually have a whole jar of crispy shallots stored in the oil it was cooked in so I just dish from that jar. You can use crispy shallots when cooking vegetables too so it makes sense to just prepare in bulk and use it for a week's cooking.

3. It doesn't matter if some of the cod still looks uncooked at this point. The heat of the porridge in the rice cooker will continue to cook the cod.


4. If you use threadfin or red snapper, you can add in 1 teaspoon of shallot oil together with the crispy shallots.

Click the link for a complete list of one-dish meals (with thumbnails) on the blog. Or check out the Fish & Seafood section for more ideas. 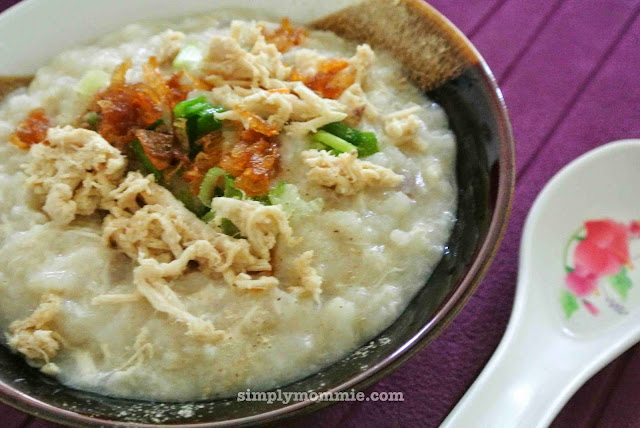