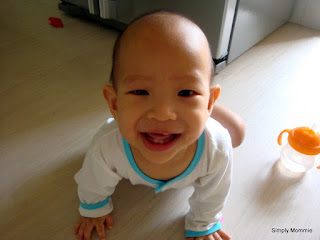 Updates on the lil man’s life:

So what did I do to make him smile so cheerfully? Just calling his name and speaking in a cute mum-sy tone! That’s all it takes to make a baby smile!!! 🙂

This entry was posted in Uncategorized and tagged Milestones, Photo *Heart* Fridays. Bookmark the permalink.