The kitchen scissors is one of the most important tools in the kitchen, especially for me as I always use it to clean up the meat and bones I buy from the wet market to boil soups for the family.

What I dislike most about cleaning the scissors after that is how I can’t clean the blades thoroughly.

The picture of my ordinary kitchen scissors: 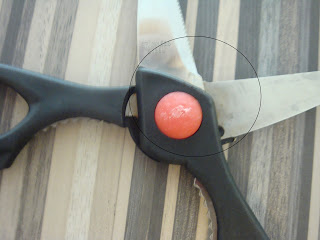 See the circled portion in the pic? It’s almost impossible to get it thoroughly clean!

Besides not being able to get some parts of the scissors clean, homemakers and frequent kitchen users are often unaware of the amount of bacteria a simple kitchen scissors can harbour. Like the cutting board, ordinary stainless steel surfaces of regular kitchen scissors can become uneven over time, creating ridges and rough spots which trap food residue. Consequently, conducive breeding grounds for bacteria such as Escherichiacoli and Salmonella are formed, and the probability of cooking contamination and food-borne illness is increased.

Given the risks of contamination and having to change my kitchen scissors very often (read: not very economical to have to keep buying new kitchen scissors!), I was very pleased when I was given the 3M Scotch™Kitchen Scissors for review. 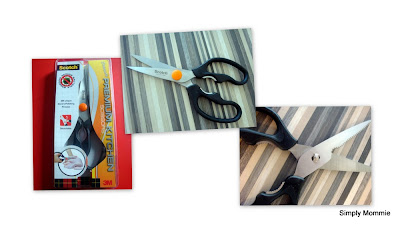 The Scotch™ Kitchen Scissors from 3M 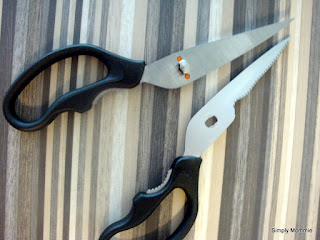 The scissors when the blades are detached 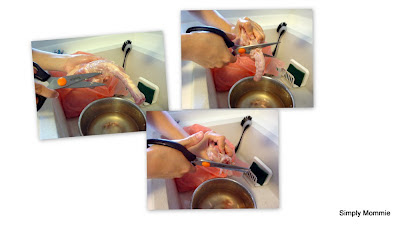 This is what I do regularly throughout the week – washing and cleaning up the chicken bones for boiling soups. It’s so easy to use this pair of scissors: cuts through the bones with little effort!
Besides using it as just a pair of kitchen scissors, I put it to the test the other day when I needed to cut through some plastic bottles to make something fun for my daughter: 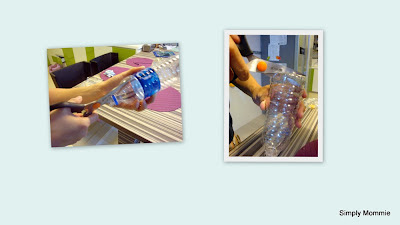 Cutting with the 3M scissors
And let the fun begin!: 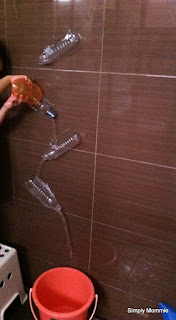 It wasn’t all that easy cutting through the thick plastic, but we were thankful that we had a pair of scissors that could cut through the bottles!

These are the main features of Scotch™ Kitchen Scissors:

·Country of origin: Blades are made in Japan (Japan-made JFE SUS420J2Stainless Steel);the parts are assembled in China

(a)Its micro-serration blades add an extra level of sharpness so the device is strong enough to cut through meat and bones, yet delicate enough to snip fresh herbs and fruits.

(c)Blades are treated using 3M’s unique electro-polishing process to combat growth of microbes and bacteria and enhance the material’s ability to resist corrosion.

Blades are easily detachable during washing but stays firm during cutting. Ergonomic design makes the scissors comfortable to use.

Overall, it’s well-designed and easy to use.

The scissors is very easy to clean and the detachable blades allow the whole pair of scissors to be cleaned and dried for hygiene purposes.

The blades are sharp and cut very well!

·Very easy to use, wash and dry

·Gives me peace of mind to know that my scissors is really very clean – especially when the same pair of scissors is used for cutting raw meat and snipping fruits into smaller pieces.

·Provides an alternative to using the chopping board and knife (I have one less item to clean!)

What can be improved:

Stand to win! 10 pieces of Scotch Premium Kitchen Scissors worth $15.90 each up for grabs!

Send your answer, name, I/C number, mobile, email address and indicate which blog you have seen this contest to officebiz@mmm.com by 27 Aug 2012.

·This contest is open to Singapore Citizens and Permanent Residents aged 18 years and above.

Scotch™ Kitchen Scissors from 3M is available at at all leading hypermarkets, supermarkets, D.I.Y stores and major bookstores.

*Terms and Conditions
Disclosure: This is an advertorial and I received a pair of Scotch™ Kitchen Scissors from 3M (detachableblades) for the review.