We made colourful ice cubes yesterday by mixing different coloured water. The original idea was to make rainbow ice cubes by starting off with blue, red and yellow. But after mixing blue and red, blue and yellow, I decided to show her how adding more blue to a blue+yellow combination changes the shade with each scoop she scooped into her container and using the ice cube tray was a really good way to see the subtle differences.

We explored a little with other colours too and some of the colours shown in the picture (which look the same) are in the process of being altered but I think you get the idea and also understand that this activity though so easy to set up and conduct can allow the child to appreciate colour changes a little more. My girl’s very used to straightforward colour mixing like blue and yellow makes green but how having more of a certain colour in the colour combination affected the shade is new to her and she certainly enjoyed the process of exploration. 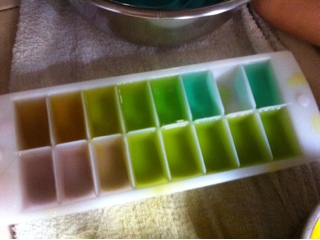 After that I left her to explore with more ice cube trays on her own but as usual, after awhile, everything ended up the same colour… Haha. Free water play after tt! Hey, scooping water counts as fine motor skills training! 🙂

This entry was posted in Art, Homeschooling, Teaching Science. Bookmark the permalink.