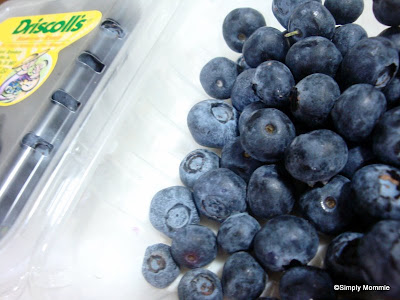 Blueberries have been in season for the past few weeks and I got some since blueberries are known to be highly nutritious and have been even hailed as a superfood by some sources. Read here for more details.
Though hubby isn’t very fond of them (I still make him eat them due to the health benefits) and Alicia isn’t exactly crazy over them, I still grabbed two punnets last weekend and promised hubby that I’d be making a blueberry sauce to go with pancakes the next day for him. That blueberry sauce with pancakes has yet to materialise since on the day I bought the blueberries, I developed a low grade fever that night and so instead of waking up early to make the blueberry sauce with pancakes the next day, I woke up early to head to the clinic instead 🙁
Anyway, on days that Alicia takes too long to eat her lunch and has no time for veggies (erm, she still largely takes her dishes one by one rather than mixed), I make her eat some blueberries instead – and somehow that seems to move a whole lot faster than say, broccoli. 😛 Well, as long as she gets her balanced meal, I’m happy… 🙂
Grab some blueberries before they are out of season! 😛
I’m sooo hoping to do that blueberry sauce one of these days!

This entry was posted in Uncategorized and tagged Fruity Time, nutritional extras. Bookmark the permalink.