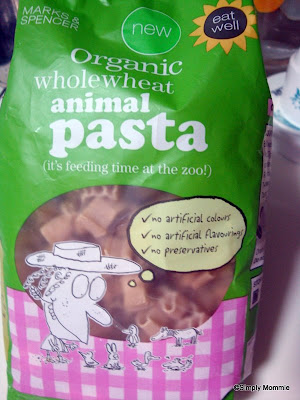 Brand: Marks & Spencer
Origin: made and packed in Switzerland
Where to buy: Marks & Spencer
Product: organic wholewheat animal pasta
Weight: 250g
Note: contains wheat, gluten;
suitable for vegetarians
My friend passed me this pack of animal pasta for Alicia (hence I’m not sure about the cost) since she doesn’t get a chance to cook for her daughter and I decided to let Alicia try it last night. 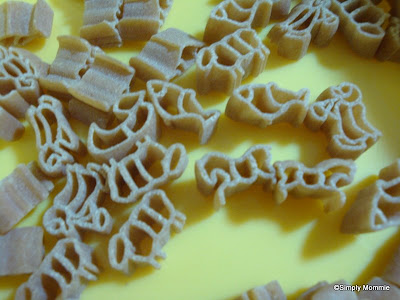 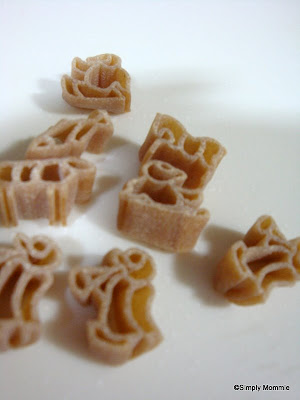 While all pastas are low in fat and good sources of complex carbohydrates, not all pastas are made equal and some pack more of a nutritional punch than others, particularly where fibre – which may help protect against heart disease – is concerned.
Marks & Spencer’s organic wholewheat animal pasta is, I would say, in the league of the more nutritious pastas as it is made from organic durum wholewheat semolina.
All semolina, regardless of whether it is enriched, contains several important B vitamins. Durum semolina in particular is very high in protein for a grain product. Semolina contains no fat or cholesterol and is very low in sodium.
It is stated on the packaging to cook the pasta for 7-8 min but I cooked the pasta a couple minutes more than stated since after the instructed time, I found the pasta still rather hard.
As an adult not accustomed to the taste of durum wholewheat, I hardly found it palatable.
Luckily, I thought to myself, I had my trusty pasta sauce to go with it to cover the taste. 🙂
Alicia’s verdict: it’s FUN to eat it! She was busy trying to point out which animal she wanted to eat and we would name the animal and make the sound that animal makes together. Rather fun really. I was holding my breath throughout the time she took to chew and swallow that first animal pasta. Fortunately she finished it quickly and asked for more… phew.
The serving size stated on the packaging: 50g of uncooked pasta for a child, give more if your child has a hearty appetite. Not knowing what age ‘child’ meant in the packaging, I decided to go with less and I prepared 40g of it. She had a few animals left in the bowl after she decided she was done with dinner so I guess I can prepare the same amount next time… 🙂
The downside of the product I guess is that this is probably quite pricey, since it’s from Marks & Spencers and it’s organic food. But I’m not really sure. I’d say, if your child is fond of animals and is quite a fussy eater, perhaps spending a little more to have that element of fun during mealtime might be worthwhile. 🙂 A little money to spare yourself from frustration during mealtimes – I think it’s worth it!

This entry was posted in Noodles/ Pasta, Reviews and tagged nutritional extras. Bookmark the permalink.