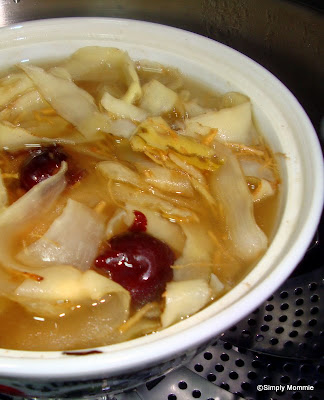 I dunno why I’ve been having little pimples lately – my hubby says those aren’t considered pimples coz they’re too small, but I hardly have pimples so it really upsets me to see those little spots on my face.
I happened to chance upon this recipe from a cookbook my mil bought and it says the soup helps to rid pimples so I thought oh well, might as well give it a try. What have I got to lose? Hehe. Anyway, the ingredients are rather similar to my ginseng root chicken soup just that the emphasis found in this soup is the Solomon’s seal. 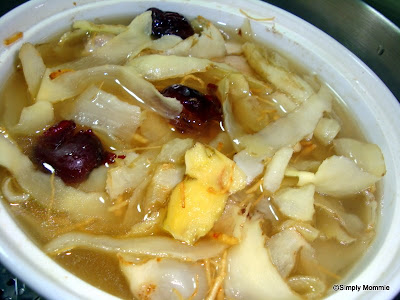 See the overwhelming presence of the Solomon’s seal? 😛 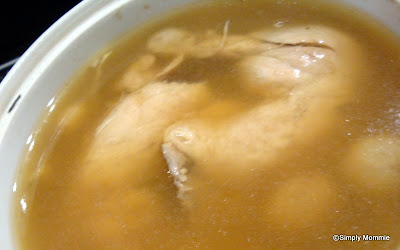 The clear soup after removing most of the herbs which can’t be eaten and get in the way!
Solomon’s seal (herbal) chicken soup
I didn’t follow the recipe exactly – I just used my own estimation… 😛
Ingredients:
Method:
Alicia loved the chicken meat from the soup as it was sooo tender and sweet. She took a bit of soup too but wasn’t so keen – probably due to the slight hint of bitterness caused by the ginseng root.
For toddler’s consumption:

This entry was posted in Chicken, Herbal, Herbal soups, Proteins for the tot, Recipes, Soups, Soups (suitable for tots). Bookmark the permalink.