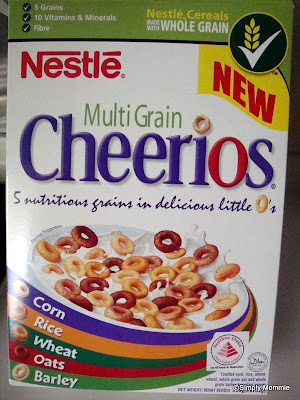 I finally convinced hubby to buy this pack of cereal for Alicia! He refused to buy it earlier as he just felt that she wouldn’t like it and since it comes in such big packaging, he didn’t want to land up with another type of food she refuses which we have to eat instead. Besides, it has happened one too many times that the super healthy food that I ask hubby to buy for Alicia tastes not just bland but awful. Hehe. I guess he’s very wary these days of any smart-alecky ideas of mine. 😛 Oh well. Anyway, we even bought milk to go along with this cereal as we decided that both of us will eat it too!
And so, this morning, Alicia and I had this yummy breakfast food together. It’s her first time having cow’s milk and she’s willing to eat the cereal together with the milk so I think it’s quite a great leap forward. My fussy one has progressed much lately and I think I might just dedicate a post to her improved eating!
Anyway, the cereal tastes much much nicer than expected, probably because it’s been lightly sweetened. Cute little Os which come in different colours due to the different types of grains are visually appealing too! Thumbs up for the Cheerios! 🙂

This entry was posted in Breakfast ideas, Food for kids, Healthy Snacks and tagged nutritional extras. Bookmark the permalink.