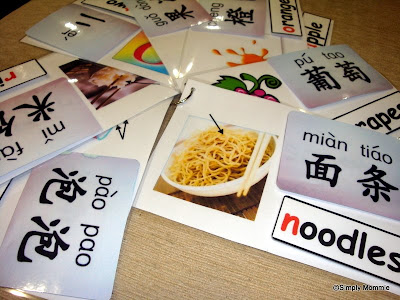 The Chinese and English words are both velcro-ed onto the card so that it gives me the option to just cover the words for one language at a time. According to one of Alicia’s chinese teachers, it’s better to just teach a concept in Chinese rather than provide an English translation of the concept immediately after telling her the Chinese equivalent. This is to prevent the child from thinking in English and translating concepts into Mandarin later on – which is what I do actually… 😀
Anyway, I chose to velcro both sets of words on the card for easy storage and when I want to teach the English words, I just remove the chinese ones and vice versa. I think it should work nicely for us for the term! 🙂
Here’s Alicia getting acquainted with the word cards: 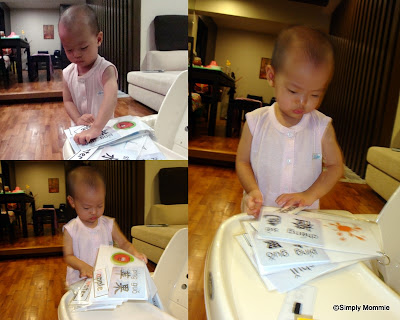 Hop over to Simply Mommie’s Precious Handmades to view other interesting learning aids! 🙂