Alicia was relatively well-behaved during Saturday’s class… Anyway, during the previous lesson, the instructors gave the children grapes to eat as part of the teaching of the letter ‘g’; this week, to teach the colour  ‘orange’, the instructors gave them carrot juice to drink! 😀 And so the kids were made to queue up to collect their carrot juice and had to say ‘orange’ before the cup was handed over (well, of course even if the children didn’t say it, they still got to drink it!). Alicia had two small cups of 30ml each… yes, she queued up twice… but there were times she just wanted to be part of the queue, even before she finished her first cup. The instructor said she just loves to be part of the queue… lol.
For snack time, the kids were given raisins, watermelon and biscuits. As usual, Alicia was the last to finish but this week, she refused to give up on the food so the instructor moved the table and chair aside so that the class could move on to the song and dance segment. And so, Alicia was the spectator for the day… every time the class danced around the classroom and when they walked by the table, they’d laugh at Alicia – still eating! sigh… and in the end, she finished everything only after the song and dance segment was over! During that segment, Alicia would do the actions of songs that she likes then carry on eating… LOL.
For art, they painted a ‘carrot’, and used a comb to make squiggly lines to make it look like a real carrot. But we didn’t get to take the carrot home as it’d be included in the graduation booklet. Here’s the other piece of art she did. She was given a balloon filled with some water and that was the painting medium for the day! 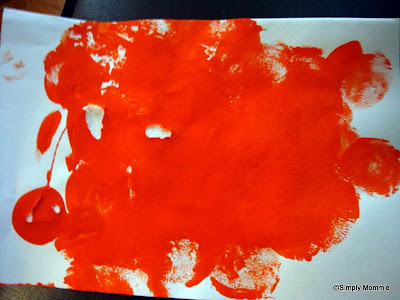