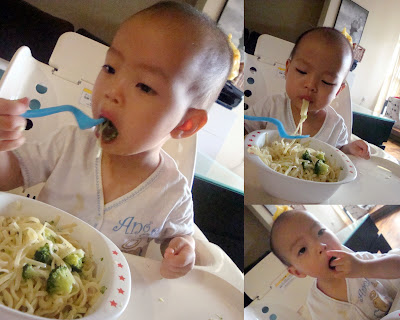 Took these photos of Alicia eating lunch today. Actually I was trying to capture her trying to pick out the broccoli to eat only but I only managed to get one shot of that (unfortunately, I can’t see the broccoli!)… Anyway, whenever she’s in the mood for self-feeding, she won’t let me help her, even if she’s not successful in her attempts….

Sometimes it’s really exasperating to feed her. Take for instance, today, first I fed her noodles… then after three mouths of noodles, I thought to try one piece of broccoli to break the monotony. Then the fussy one spat out the broccoli… but had second thoughts so she started digging around the noodles to pick out only the broccoli and when I tried to feed her noodles, she spat that out… and tried to salvage the broccoli bits from the mouth-full that she spat out… *faint* so I left her to eat on her own after that… she picked around some more then decided she had enough. Sigh…

This entry was posted in Uncategorized and tagged Self-feeding. Bookmark the permalink.