I gave some water to Alicia to play with yesterday and she had a great time transferring water from one container to another! I thought to give her some opportunity to practise some gross and fine motor skills and have fun at the same time since she loves water!
While blogging about this, I happened to chance upon this site (which you may be interested to read about the benefits of this activity).
Here she is, concentrating very hard on her task: 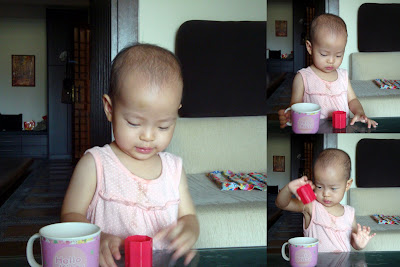 And halfway, she started dancing as the DVD was playing one of her favourite parts of Elmo’s World (but her eyes remained on her cups and water): 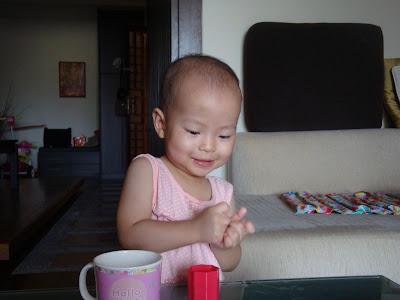 And a short video of her enjoying herself during the activity:
Eventually, she found more containers to transfer water to, making use of her imagination as she used little parts of her toys as ‘containers’.
This activity’s rather messy though and you’ve gotta constantly have a dry cloth around to mop up the water that lands on the floor in case the child slips. You’ve gotta also have some drinking water to replenish the cups of water when the water eventually all gets spilled somehow – Alicia likes to sip from these cups and pretend-cups so drinking water is a must!
Another point I noted during the activity:
Alicia tried transferring water with both her right and left hand and I realised that her right hand’s so much more accurate than her left! 😀