It’s now getting so enjoyable bringing Alicia for class at JG. She’s so well-behaved and attentive: it’s definitely money well-spent. The only time she doesn’t behave as well as the rest of her classmates is during snack time… that’s coz she’s so picky and hardly eats anything they give. We’re either first to finish (i.e. she refused everything) or last to finish (she takes bites and keeps spitting)… Other than that, she’s the most well-behaved. She doesn’t run around in class and doesn’t disrupt the class *beam* Even the teachers are so full of praise of her nowadays!

Anyway, yesterday was Parents Chat day (i.e. Meet-the-parent session) and it was held during the indoor freeplay time. The only thing mentioned that was new to us was the discount for existing students! We were so excited to hear that there was a 50% discount on the English and Mandarin PlayClub (held on weekdays) and hubby quickly went to check out the details right after that while I continued to accompany Alicia in class. By the time we got home after lesson, we’d decided that we’d enrol Alicia in the Mandarin PlayClub to give her more exposure to Mandarin. We don’t speak enough Mandarin to her at home (but at least she knows her Chinese name now!) so it’d be good for her. The best part is that it costs us only $235.40 for 5 weeks of lessons (twice a week). That means that’s only $23.50 per lesson! What a steal! The only catch is that I’d have to bring her there and back by cab on my own since hubby has to work on weekdays. But that’s a small matter…

A new development I saw in Alicia yesterday was her willingness to help to keep the toys after playtime. She’d usually be fussing and crying and trying to take the toys out of the basket instead of helping to keep them. Yesterday, she actually helped to keep the toys. I’m so happy to see this change in her. 🙂

For art, we had our first encounter with glue! Alicia didn’t really dislike it like some of the kids did; neither did she find it very fascinating. 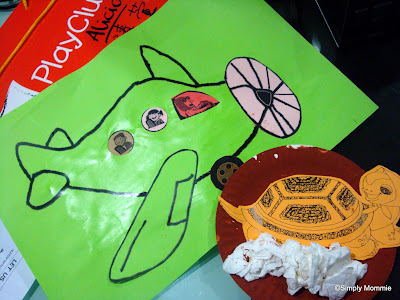 She was supposed to have waterplay but I didn’t let her join that activity as she’s still not fully well. So I brought her to the playground instead during outdoor play. There I had a short chat with the Mandarin teacher and she was asking me if I call Alicia by her English or Chinese name. She was surprised to hear that I usually call her by her English name because Alicia responds to her Chinese name when she called her. I told her that Alicia only knew her Chinese name recently when we started to use it to call her after we started the Bilingual class at JG… and she even tried to pronounce her own Chinese name! The teacher was naturally impressed. 😀 Anyway, somehow we didn’t use her Chinese name till recently so in the first couple of lessons at JG PlayClub, when the Mandarin teacher called her Chinese name, she didn’t respond. Fortunately, after a few days of consistent calling of her by her Chinese name, several times a day (other times I still used Alicia), and I kept explaining to her that “Alicia=Jingxuan”, she got a hang of it. 😀

That’s all for yesterday’s lesson… can’t wait to go for the Mandarin PlayClub which starts this coming Wed!