Alicia wasn’t her usual self today – both at class and at home. She kept fussing and throwing tantrums and really tested my patience. Even her teachers noticed that she was in a bad mood today. But of course, no one really knows why. And she can’t express herself well enough yet to tell us what’s up with her today.

Anyway, I think it’s a generally bad day for me today. The cab driver who took us to JG was a really rude, grumpy man who never once smiled or greeted us or said any niceties at all throughout the trip and even at the end of the trip. And he glared at Alicia and threw her a disgusted glance when she made a little bit of noise in the cab. And he kept grumbling how he may be made to pay the parking charge for driving into JGC even though I reassured him that there was a 10-min grace period and I’m certainly not gonna take that long to get out of his cab – I definitely wanted to alight as soon as I could! Who could possibly face such a grumpy man any longer than necessary?

Oh well. During today’s lesson, Alicia was naughtier than usual, though she did help to keep the toys and the toy tray. She just didn’t sit as still as usual during story-telling time and even fussed when I tried to seat her nicely in my lap! And when the teacher asked her to go collect her funpass, she refused to go forward and made a scene even. Sigh.

During art time, she again, for reasons unknown to me, started to throw tantrums. She insisted on sitting on one of the teachers’ lap instead of moving to the next station to complete the next art piece. And when she finally completed the second task, she refused to go and wash her hands. I was really tired out by her silly tantrums and she definitely was trying to test her limits today!

Here’s her art work for the day. This week’s theme is “Circle” so they made a ‘clock’ and a ‘watermelon’… 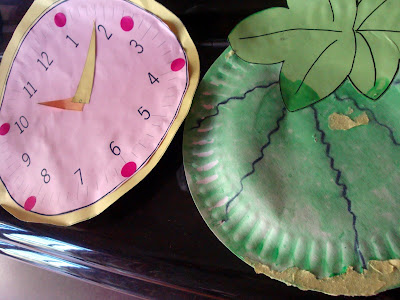 The paint for the watermelon was still wet when it was time to go home so it stuck to the clock… that explains the yellowish bits of paper on the ‘watermelon’… hehe.