During Mandarin PlayClub, the teachers will go through with the students individually the Chinese words for the week (and those already covered in past weeks) using the prepared word cards. I observed that those 2 years and above were all more or less able to repeat after the teacher for some of the words they have covered in the past five weeks (including the Indian boy who’s in the class too! – impressive!). Well, technically, she did learn these words too at Bilingual PlayClub since JG has the same theme across the classes, there wasn’t such time and attention set aside for each student in the Bilingual PlayClub since the class is much bigger. Since Alicia has missed half of the term already with this class, and she doesn’t have much exposure to Chinese words, I decided to reinforce them with her every morning when it’s Speak-Mandarin-time-with-Mummy. 😀
And so, I got to work immediately after I put her to nap that day after lesson, and by the time she woke, the word cards were ready! 🙂
Well, I don’t use these like flashcards in the sense of flashing them at her at a quick pace. Rather, on the contrary, it’s to slowly read those words to her and get her to understand them. That’s what is done at JG anyway.
Here’s a pic of my cards!: 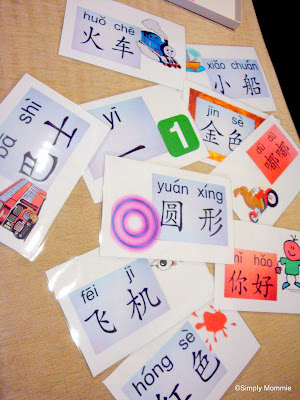 Hop over to Simply Mommie’s Precious Handmades to view other interesting learning aids! 🙂

This entry was posted in Homeschooling, Teaching Mandarin. Bookmark the permalink.