Alicia was a very well-behaved girl in class and I can almost say that she was the only one who didn’t misbehave yesterday! 😀 Even the teachers praised her for being such an attentive listener. My hubby who was watching outside during that segment was also impressed by her behaviour during story-telling time: she just sat quietly and docilely in my lap and listened to the story despite the fact that there were quite a few kids moving to the front and standing up, blocking the view of others, much to the frustration of the instructors. Yesterday the instructors had to stop story-telling a couple of times and asked the parents to ‘collect’ their kids due to this behaviour. Well, that used to be my alicia a couple of weeks back 🙂 I’m glad to say that she’s a lot more settled in class – at least when I’m with her. 😀

We painted the number 1 with a toothbrush and sprinkled glitter on it (she loved this part) after we were done with the painting. She didn’t put up a fight when it was time to move on to the next task. 🙂 Then we proceeded to wait for the next art station to paint the ‘ice-cream cone’ and stuff it with tissue paper and then paste stickers on it as the ‘topping’. Rather interesting I must say. Meanwhile while waiting for her turn, she snuggled up to the teacher and insisted on sit on her lap (she and this Chinese teacher seem to have an affinity for each other!) When it was time to go wash up after art, she didn’t kick up a fuss either. What an angel! Fortunately she wasn’t too d-i-r-t-y so I could manage the washing her up alone (hubby went back to vacuum the house before coming back to JG to pick us up). 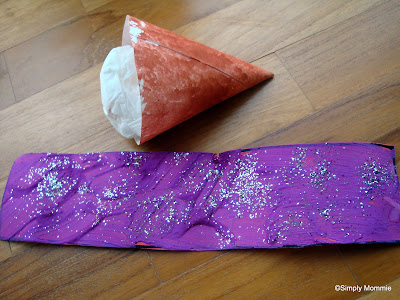 The ‘topping’ of the ice-cream was blown away as my hubby brought home the artwork from the car!

For snack time, she had biscuits, cheese and watermelon. As usual and as expected, she ate only the watermelon before proceeding to hone her spitting skills as she ‘ate’ the biscuits and cheese. After she decided she was done with the eating, she got off the chair and went onto the floor. For some reason, she lost her balance and she hit her lip against the floor and started bleeding. The teacher quickly went to get her an icepack but before she returned with it, Alicia had already stopped crying. Thank goodness. I thought I’d have to latch her on to comfort her but she was a brave girl yesterday and she even let me hold the icepack against her mouth for awhile before she decided it was time to move on to outdoor playtime

I went to return the plate and cup (which was just three steps away!) and by the time I turned round, she was already at the door, going out to the play area on her own – fortunately she was stopped by the teachers. We had sandplay yesterday and she still doesn’t quite fancy sand. She protested when I wanted to put her into the sandpit and kept pointing to the playground. So I thought to give in to her request and was already on my way out of the sandplay area when a teacher came along and tried to coax her to play with the sand instead. Alicia relented to playing with sand but she still refused to get inside the sandpit. And so she just stood outside the sandpit and scooped sand in and out of moulds for the whole of the playtime and never asked to go to the playground after that. That’s quite an improvement, since the last time she had sandplay during PlayNest, she cried and refused to even touch sand! 🙂

We had a wonderful time at class yesterday and I feel that she’s beginning to enjoy class – and not just the playtime! 😀