I accompanied Alicia into class today and she was such a good gal! She was so attentive and didn’t move much and she even enjoyed the activities and sat still during story time. We were duly impressed and so were the teachers! 😀 Hubby and I were wondering what made her so different in class today compared to the past two weeks and we both came to the conclusion: I accompanied her today instead of my hubby. Whenever she started to get distracted and wanted to go walk around, I’d pull her back and seat her nicely on my lap – and she’d stay still and concentrate on the given task/ activity without (much) protest. When hubby did the exact same thing to her for the past two lessons (and in the later part of the session today), she refused to sit down. Kinda strange since he’s the disciplinarian at home. When we swapped over and he accompanied her for the session after outdoor playtime, she displayed a shockingly different behaviour – she started her nonsense of walking around class again – so we sorta concluded that she probably associates learning with me and therefore is more willing to sit down and listen when she’s with me. Actually I noticed this already last year when she attended PlayNest. She was attentive for all the days that I went in with her and the only day that hubby could attend with her, she displayed that same distracted behaviour.

Anyway, fortunately art wasn’t too m-e-s-s-y today and we spent some time concentrating on developing fine motor skills too while we were at it. Here’s Alicia’s work for the day and she enjoyed threading too (so I allowed her to thread through whichever hole that she fancied): 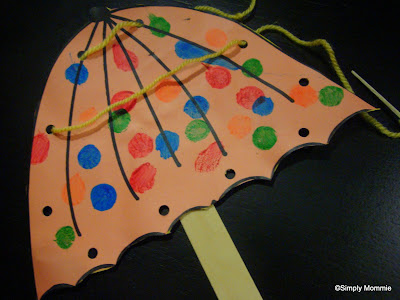 Snack time wasn’t too appealing to Alicia today coz they served up raisin bread and cheese cubes – which she doesn’t like. So the only thing she ate today was a cube of watermelon and a bit of juice before going off to play at the playground. Boy was she overjoyed to be out and about! There was an improvement in behaviour today though: she didn’t kick up a fuss when it was time to leave the playground and go back into class!