It’s the start of the school term again and it’s Alicia’s first day at JG Bilingual Play Club (the class is for 18mths-3 years old). She turns 18mths old officially tomorrow so yup, she’s definitely the youngest (and smallest – no prizes for guessing that) in class… not to mention, the most restless. She spent quite a bit of time wandering around on her own, exploring the classroom and joining in the class activities every now and then, whenever she felt like it. Ok, to give her some credit, that happened rather often. Anyway the instructor says this restlessness is perfectly normal and only to be expected as she, unlike the rest of the kids, is much younger and still in the early exploratory stage and therefore, is unlikely to follow instructions in class all that much. That’s comforting news to us, though her performance in class today made me wonder if it’s a waste of our money to send her to class now. Nevertheless, I’d say that she had fun today and was really tired at the end of class. It didn’t help that she slept at almost 2am last night and so she was quite grouchy due to the lack of sleep (she woke at 7+ for a milk feed before falling asleep again and waking at 10am to get ready for class). We thought the class was at 11am and we rushed there only to find out that it was actually at 11.30am! Well, it’s a blessing in disguise as we reached JG only at 11.15am coz we overslept today!

Since we turned out to be early, we brought her to the bookroom to check out the books and the place – when we were there for class during the holidays, the bookroom wasn’t open as it’s only open during term time. Hence, we finally got to enter the bookroom and alicia had some fun there playing with some crayons and colour pencils and a piece of drawing some kid left behind. After her applaudable behaviour at the bookroom, we decided that it was time to take out her crayons for her again since she seemed to be more mature since the last time she was handed a crayon at home. So there’d be more drawing time at home for Alicia soon… provided she eats her meals fast enough to have time for anything else besides eating…

Quite unfortunately, the studio her class is allocated is right next to the outdoor play area. Though it’s very convenient when it’s time for outdoor play, the glass panels make it so distracting for my playful Alicia. It didn’t take long for her to realise that there was a playground out there and boy did she remember the toy cars she played in last November. Before we went for class, I was wondering if she could remember the place. But once we parked our car and alighted, I knew she could recognise JG from her behaviour and actions! She waved her hands excitedly as if to say that she knew the place and remembers the fun she had there during the holiday enrichment class.

Today’s snack time was rather interesting as it’s no longer food meant for 6-18mth-olds. Today on her plate were some cornflakes, a cube of watermelon and 2 pieces of sausages and they were given a choice of fruit juice or water. Alicia of course attacked the cornflakes first before eating the rest of the food. I guess she was hungry coz it was her usual lunch hour and she didn’t eat that much for breakfast (she had only about 3 tablespoons of beef casserole at home and some brown rice crispies in the car). She took a bite of the sausage and fed the rest to me. I was hoping she’d do so actually coz I’m not keen on letting her eat such processed food before she turns 2. Just a bite or two wouldn’t hurt though. Anyway, after tasting the sausage, I realised that the staff at JG had already scalded the sausage enough to remove all the saltiness so it wasn’t that bad for kids’ consumption. After all, I think all the kids in the class were at least 2 years old.

Art today was a terrible m-e-s-s (oops, not supposed to use this word as instructed by the teachers) though Alicia didn’t participate as actively as she did during the holidays. My hubby was with her for most of the lesson today while I watched her through the glass panel on the door. According to him, she wasn’t so interested during the art session today and they were (yes, both of them) already so covered with paint and sparkles. Imagine how it’d have been if she were participating properly! Today they made a ‘telephone’ and a ‘horn’. Here are her masterpieces: 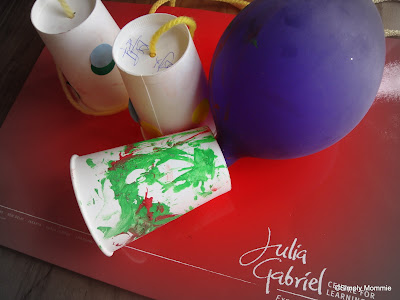 Outdoor play and the singing session after that are still the highlights for her. She was so upset when it was time to go back to class and she fussed while the rest of the children just quietly went to wash their hands. Hopefully when she’s older she’d behave better. We sang some familiar songs during the singing session and she remembered the ‘skimarink’ song which she knows as the ‘I love you’ song. She was clapping and happily singing “I” every time it came to the “I love you” part. And oh, this is first time I’ve heard Itsy Bitsy Spider – the Mandarin version. It sounded weird to me, as all Mandarin nursery rhymes do. I guess I’m just not used to Mandarin nursery rhymes even though I am bilingual! That’s coz I think I didn’t grow up listening to them… I daresay I know most English nursery rhymes though! It’s good exposure for Alicia to be in a more Chinese-speaking environment now and then and I learnt some new things today from the Chinese teacher. She told us to speak to the child in Mandarin at a fixed time every day to get the child used to the language and also not to do unnecessary translations for the child (e.g. when teaching the child the colour yellow, just say it in Mandarin and leave out the English translation – let the kid go figure herself). That’s contrary to what I thought about learning language but I think I was thinking about it from a different contextual perspective: I was thinking of language acquisition of a second language and how it helps to have the translation bit. But I guess kids whose Language Acquisition Device, according to Chomsky, is at its most active stage, need no such help. Well, that’s the theoretical bit I used to be so fascinated with when I was doing my Honours degree. 🙂

Overall, I think it’s still worth the money to let Alicia go to class coz she’s picking up things very quickly recently. Even though the results will not be obvious till much later, I believe that she’s absorbing the new knowledge now! Well, one thing that’s important to me is to let my Alicia enjoy her childhood and not bog her down with the ‘academic’ type of lessons. JG’s philosophy of learning through play definitely works well for us!