We brought Alicia for a trial class at Baby Jumper Gym last Saturday. We were expecting a gym lesson so we were kinda shocked when we were led to a classroom instead. As usual, we were late for class so the teacher had already told a story (fortunately, that was the only segment we missed out on). When we first entered the class, it was already flashcard time. We were SHOCKED at the speed at which the teacher flashed the cards! I mean, I was aware that flashcards are flashed pretty quickly but i really had no idea it was that fast! Anyway, I think Alicia was shocked too… haha.. Photography’s not allowed in class so we couldn’t take any photos or videos during class. Not that we could have had a chance anyway since the class was jam-packed with short 5-minute activities (except for the gym segment where they had a bit of freeplay for awhile).
The teacher actually after flashing the cards to the class, went round to each individual toddler and asked the toddler to point at the flashcard she asked for. We were stunned and speechless that Alicia got them right! Well, she didn’t get all right, she only got the first one wrong coz i guess she didn’t know what the teacher wanted and she was new to flashcards. I only introduced flashcards to her after the class upon witnessing the power of flashcards on the toddler’s mind! But anyway, it was really stressful coz we kept worrying that Alicia would answer the questions wrongly coz the other 2 boys in the class seemed quite used to flashcards. At the end of the class, we realised that Alicia was placed in the wrong class! She was placed in the Walkers 2 class instead of Walkers 1. No wonder the 2 boys seemed more advanced… haha… oh well, it’s hard to be a parent these days!
Anyway, we bought 2 packs of flashcards from Borders: one for numbers 0-20 and the other for alphabets. Alicia is simply amazing coz i only started on the alphabet cards 2 nites ago and when her daddy was just casually playing with her last nite, she managed to pick the right flashcards when she was asked! And it wasn’t just a one-off thing and actually my hubby made it quite difficult by asking to choose among 4 cards and not just 2 (which is what the teacher did in class). A toddler’s brain is simply awesome!
Below is an attached pic of alicia’s favourite flashcards from the alphabet series: 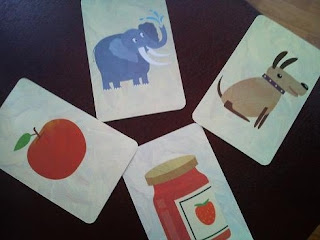 Alicia will make eating noises when she picks up the pictures of food! And somehow she thinks all animals go “moo”! She used to only go “moo” when she sees pictures of cows…

This entry was posted in Uncategorized and tagged Enrichment Class, Flashcards. Bookmark the permalink.