Feeding Alicia became a nightmare in the 9th month. Somehow, when she turned 9 months old, she decided that it was time to be a fussy eater. I have no idea what triggered that off but from then on, it’s been a nightmare to feed her. My little girl who used to love food given by mummy now suddenly transformed into the pickiest, fussiest eater on planet Earth. The porridge which she took only 15 minutes to finish in the past suddenly became the most detestable food to her. She rejected everything that I fed via spoon so porridge and cereal became impossible to feed. That meant that I had to figure out how to get food into that little mouth… so I tried these foods (carbo):

From the above list, she took well to bread, pancake and macaroni shells. Finally, I thought… something that she agrees to eat.

Of allergies and tofu…
Tofu was served with mango cubes and mango puree. It looked like tau huey with mango sauce and cubes, looked pretty tantalising and my fussy eater took a little of it. Unfortunately, Alicia was allergic to soy – something we found out two days later when she started developing hives. Poor little darling… but fortunately, I don’t think she felt any itch unlike adults for she behaved normally and wasn’t fussier than usual. We brought her to the doctor and she was given some medicine for the hives to clear. I was later advised by a nutritionist that the next time I can introduce soy products to her is when she’s 15 months, so those who have babies with soy allergy do take note…

The recipe for whole wheat pancake can be obtained from First Foods by Anna Jacob, Pauline Chan, Samantha Thiessen, Janie Chua and Wong Yuefen and for copyright reasons I will not publish it in my blog. It’s an interesting book and has recipes for the Asian palate as it is written by Asians.

For Alicia, I actually adapted their recipe to make my own pancakes. Instead of just flour in the batter, I added vegetable and even meat puree into the batter! And when I served the pancake, I would serve it with some fruits like applesauce or mango cubes. Voila! A complete meal for the fussy little one.

Macaroni Shells
For macaroni shells, I would cook the shells till they were very soft instead of al dente. Then I’d fill up the shell with some fruit puree (applesauce/ banana) or mango/ papaya cubes. Vegetable puree wasn’t used because I thought the taste of the vegetables might be too overwhelming and she may not like it.

Snacks
I introduced Bellamy’s organic toothie pegs to her at this time and also Gerber’s stars. She really loved the stars and quickly mastered the art of self-feeding. =)

Check out my little darling eating her rusk! 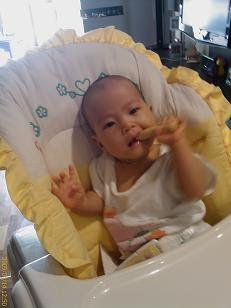 Look at her naughty face! 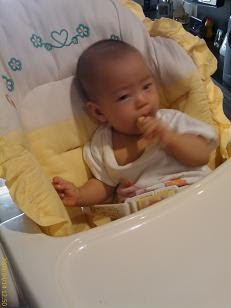 She kept moving… changing the rusk from one hand to the other.. so difficult to get a steady shot! 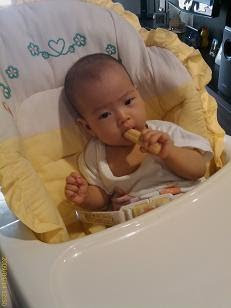 Here she is, looking a bit blur and slightly more demure and less cheeky than usual… 😀

And so the days passed, with feeding finger foods as the only way of getting any food into her little tummy…