When Alicia turned 8 months, I decided to introduce some new foods to her: 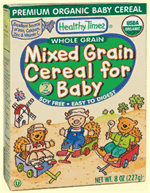 • Broccoli (only the florets; the stalk gives rise to gas in tummy)
• Cauliflower
• French beans
• Spinach (only the leaves, make sure it’s washed properly and try to buy organic ones because of the large surface area of leaves)
• Minced pork
• Porridge cooked with vegetable (and fruit) stock
Note: Read on for some recipes and pointers

Vegetables
I had put off giving her broccoli and cauliflower earlier because these vegetables are harder to digest and may cause discomfort to baby. Pureeing these vegetables was very, very hard work. The food processor I bought for preparing food for Alicia was not very good at pureeing ‘harder’ food like broccoli, cauliflower or French beans. So I had to do it manually by pushing them through the sieve. I remember that I almost had blisters on my hand after spending an hour pureeing a batch of French beans. That was the first and last time I pureed French beans for her. I decided that French beans could wait till she could chew them properly although beans are really nutritious.

For spinach, one of the most important things to take note of when feeding spinach is NOT to use the water in which the spinach was cooked in to puree it. Always use a fresh batch of water to puree it. This is especially so for younger babies as nitrates may be an issue.

Egg yolk revisited
Some time during the 8th month, I decided to try a new way of feeding her egg yolk coz she simply detested it when I mashed it into her cereal. See her pathetic look after fighting with me over her meal: 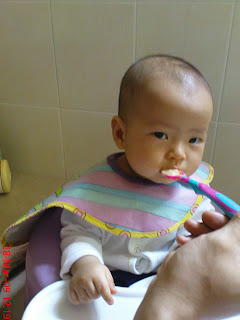 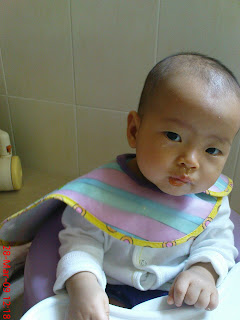 I decided that I’d just feed her the hard-boiled egg yolk as it is instead of mashing it up and boy was that a hit with her! So sometimes when baby rejects a certain food, try cooking it and feeding it in another way and the baby might just accept it! And so it was, an egg yolk a day was a critical part of the daily menu from then on.

Minced Pork (and chicken)
Try to buy pork fillet and do the mincing at home on your own instead of buying minced pork over the counter. This is because the pork used may be scrap meat and hence lower in nutrients and hence not suitable for our precious little ones. [The same goes for minced chicken (opt for chicken fillet and mince it at home)]. Also, you get the wash the pork really clean before mincing it.

Porridge
And porridge came into the picture in this month. I tried several times before I figured out how she liked it to be served. She liked the porridge when I cooked the grains in stock rather than water.

Ingredients
• 1 soup pot of water
• 2 corn cobs (IMPT note: some babies are allergic to corn, so if baby develops any allergic symptoms, stop giving the stock to the baby)
• As many apples as you like (skin and seeds removed, chopped into pieces: you can leave the skin on if you bought organic apples and washed them really really thoroughly. Personally, I wouldn’t risk it so I always remove the skin although it is said that the skin adds nutrients to the stock)
• Carrots (only suitable for babies above 8 months due to nitrates)

Method:
Boil on high heat till the water boils then simmer over low heat for 2 hours. Sieve the ingredients from the soup and pack the stock into small portions to be frozen.

Directions for cooking porridge using the slow cooker:
• Wash 1 tablespoon (15ml) of rice grains thoroughly to remove dirt
• Pour in three ladles of stock (about 150ml) and the rice grains into the slow cooker
• Warm the stock and grains on the stovetop till the stock is boiling hot before placing the slow cooker back to cook
• Leave it to cook for at least 2 hours. After 2 hours, check the consistency of the porridge in case the porridge becomes too thick and dry. (If it does become too dry, add some hot water to it and let it cook for a little while.)

Up to this point, it seemed that she loved eating for she ate everything that I gave her happily… but my happiness was short-lived…