Besides feeding the usual fare of the food that she’d been eating when she was 6 months, I started her on some new foods when she was 7 months old…
• Peas
• Applesauce (steamed apple) (well, not exactly a new food but this went down much better with her compared to raw apples because it’s sweeter)
• Cod (remember to get the fishmonger to sell you only the tail portion for it contains the least bones, get him to debone and deskin it and of course, remember to mention that it’s for cooking for baby)
• Brown rice gruel (Moon Rabbit Si Shen Brown Rice Powder) – she ate some of it but didn’t really like it
• Baby Bites 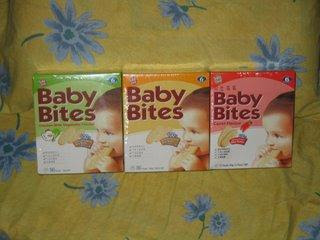 Pea puree
Remove shells from frozen (or fresh if you wish) peas.
Steam for 5-7 minutes.
Puree the peas.

Applesauce
Cut apple into pieces and remove the core. Keep the skin intact for nutrients retention.
Steam the apple for at 20-30 minutes. It is ready when the flesh is easily scooped out from the skin. 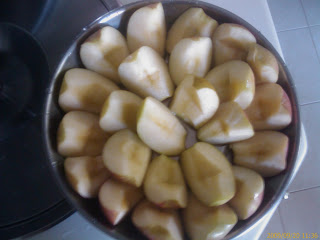 Remove the flesh from the skin.
Puree the apple flesh.

Cod
She liked the cod (I’d just steam it and serve it plain)… oh well, she liked it better than threadfin though I wouldn’t say that she loved cod. From then onwards, she has been eating cod every day till today and I’ve been slowly increasing the amount of cod she takes a day. It’s pretty expensive but I feel that it’s essential for my little one…

About allergies and such, some literature also state that fish should only be introduced after 10 months but from my own observation, Asians tend to introduce fish much sooner, almost as soon as the baby starts on semi-solids. My take on this is that as long as you start with a fish with low-mercury levels, it should be fine for the baby. I have also come across comments that cod is too oily and hence difficult to digest. Personally, I think it’s ok to just give the baby a little to try and see if there are any real problems. If it is true that the baby does have difficulties digesting the fish or if the baby detests the fish because it is too oily, then just switch to another type. There is really no need to strike cod off your list of fishes to introduce to your baby immediately.

Egg yolk
Oh, and at 7 months, she still didn’t quite like egg yolk. Anyway about egg yolks, some sources state that egg yolks should only be introduced after 9 months in case of allergies but the literature I worked with at that point in time (a pamphlet from the polyclinic handed to me by the paediatrician at KKH) said that egg yolks can be introduced at 6 months of age. The kiasu mummy that I am followed closely to the advice and fortunately, Alicia didn’t have any allergies… 🙂