Alicia’s turned one! This means that she can start to eat more types of foods, including foods that may trigger allergic reactions like egg white and honey. A couple of days before she turned one, I fed her a wee tiny little bit of egg white to test if she was allergic to it for I had intentions of letting her have a little bit of her birthday cake. It would be too mean to deprive her of her birthday cake – after all, she was the birthday girl. But I didn’t want her to fall ill after having her birthday cake so I decided that I should conduct my ‘experiment’ first… hehe…

And so, the foods that she tried upon turning 1:

Note: Read on for some recipes and tips regarding the above foods.It’s quite a list isn’t it…

Here’s a picture of her birthday cake from Emicakes! 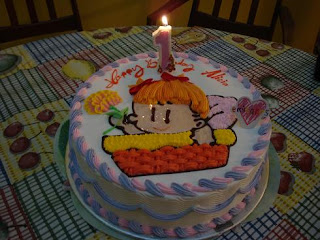 For lack of a better description of the dish, I’ll just call it ‘meat loaf’ 😀

Method
This can be frozen for up to one month.

You can puree this for a younger baby. Alicia ate this as finger food as I broke it up into small pieces for her. She didn’t like it much so I only made 2 batches of it.

Refrigerate and use within 24hrs or freeze for up to one month.

Again, Alicia ate these as finger food. But as with the meat loaf, she didn’t like this at all.,,

I re-introduced cereal into her life because I suddenly felt that she needed the added iron which is found in iron-enriched cereals so I bought the Heinz Muesli and Apple cereal for her. She was quite ok with it and at the peak of her appetite, she was eating 2 tablespoons of this cereal mixed with 1 tablespoon of Earth’s Best instant oatmeal and 1 tablespoon of applesauce (so that she can absorb the iron better) topped with 1 teaspoon of wheatgerm as part of her meal. Again, this craze didn’t last long and an unopened pack of cereal is still sitting on my table… 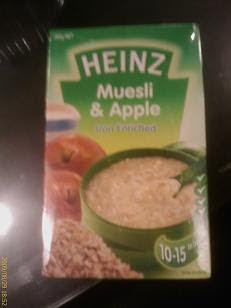 As she refused to eat meat still, I tried to hide the meat in her food… here’s the recipe: 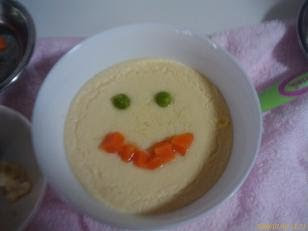 Alicia smiled at the decorated steamed egg and said ‘hi’ to it (after I made the bowl of steamed egg ‘talk’ to her – I was the one talking of course…). I think she gave me some credit for decorating it and ate a few mouths of it before she refused it… sometimes I wonder why I have the luck of having such a fussy eater… sigh… that wasn’t part of the deal…

This was and is still very popular with her. On a good day, she can wolf down up to 8T of vegetables at one sitting as part of a meal! That’s a feat for a fussy eater…

She dislikes sour stuff so she didn’t like strawberries at all. Actually even when they were sweet, she still didn’t like it. The same goes for oranges. Rock melon became a hot favourite this month and she could eat like 6 tablespoons of it on top of other fruits till my hubby had to stop me from feeding her more… haha… She ate a bit of persimmon this month but I don’t give her that much of it because it is said that it may cause phlegm.
I hardly get a chance to take a photo of her dinner or lunch properly because usually I don’t cook all the dishes at once as they will turn cold by the time she eats all of it. But here’s one of the rare days that I prepared the dishes at one go for her dinner: 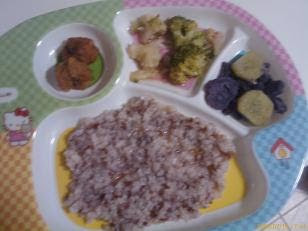 That’s brown rice porridge, broccoli, cauliflower, yellow and purple sweet potato and eggless apple muffins for dinner and dessert.
Did she fnish this that day?
YES!
Must be because it’s her new plate (her birthday present from fourth grandaunt)
Subsequent attempts to feed using this plate were less successful…