At 10 months, things picked up again. After her first 2 teeth appeared, she started to eat better. She began to like porridge again and agreed to eat from the spoon. Her favourite was sweet potato porridge. The new foods I introduced her to this month were:

Note: Read on for some recipes and tips regarding the above foods.

• Pan-fry chicken in a non-stick pan for 1-2min per side. Avoid browning the chicken otherwise it will be too hard to puree.

• After cooking chicken thoroughly, add a little water or stock for easier blending.

• 15min before serving the porridge, mix the minced pork with some warm water (so that it doesn’t clump up in the porridge which will cause choking) then pour the mixture into the slow cooker.

• Stir the porridge and leave to cook for 15 minutes.

• Add in cooked vegetables into the porridge before serving (optional)

Don’t serve red date porridge too often as the taste is quite strong and some say that this may spoil baby’s taste buds. In any case, Alicia didn’t find red date porridge all that appealing so after awhile I just stuck to cooking porridge using stock. Just for info, the goodness of red dates: they nourish the stomach and spleen and strengthen the heart and lungs. And to reduce the heatiness, you can remove the seed from the red date.

Cheese
I introduced cheese in small amounts to her in this month. I let her have some Emmi cheese (which my niece was having at that moment) and she took a few mouths of it before turning away. I also tried giving her cheese with potato cubes so that the potatoes were tastier. Again, she only took a few mouths and that was it. I gather that she needs more time to get used to the taste of cheese…

French beans… AGAIN!
In this month, I started adding finely chopped French beans into her porridge. Finally, I could give her French beans without pureeing it… =)

Cherry tomatoes
I added cherry tomatoes to her porridge and she didn’t really like it. I sautéed the tomatoes in a bit of olive oil and added minced meat into it – much like our adults’ spaghetti sauce. I placed this combination into the macaroni shells and on the first day that she had it, she simply loved it. Subsequent days when I tried the same thing with her, it became a battle of wills (I try not to let it come to that state but sometimes it just happens – well, I’m still learning every day!)

More new fruits: Kiwi and Dragonfruit
As long as the fruit is sweet, my picky little eater will eat it – this holds true at least for this month. My little fruit baby is starting to not like papaya though it used to be her favourite fruit! How their tastes change!

Baby Yoplait (Yogurt)
She simply detested this! After feeding her the first mouth and tasting it for ourselves, we agreed that it was only human to detest the yogurt. It was sour and gross and it was little wonder that The Fussy One refused it… 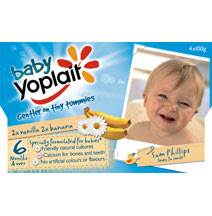 2 Responses to Feeding at 10 months